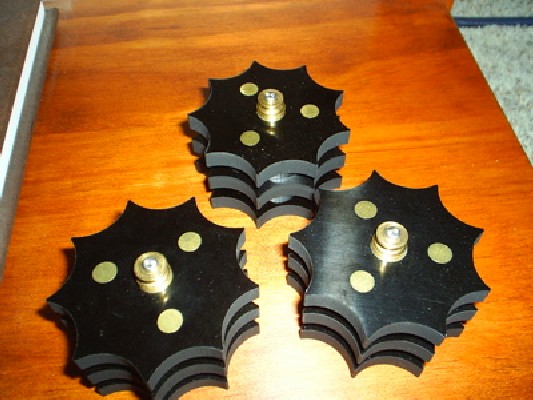 Last spring while I was strolling from room to room at VSAC in Vancouver, Washington I came across some unusual accessories from Marigo Audio. First were some dots that looked like they belonged on a ice cream cone. But as I peered farther into the room I spotted what maybe some of the most interestinglooking bases for audio ever to be produced, the Mystery Feet in a couple of sizes.

Ron Hedrich, the owner and creator of the feet gave me a soft pitch on their attributes. He was more than confidant that the sonic improvement would speak for the Feet’s worthiness and price. Now Rob is a local Portland guy, therefore it was easy to accept the crop circle look to the Mystery Feet. After all, the most popular bumper sticker in city reads “Keep Portland Weird”.

The Marigo Audio TR and VX Mystery Feet “cylinder” is an in-house manufactured, advanced constrained layer system that is 9 layers thick. There are 32 distinct parts in each foot. Yes, 96 parts just to make one set. Inserted into the three levels are what appears to be three brass rods in a triangular position about halfway into the disc. At the center is a brass center post that is raised up in a tapered shape on the bottom-side. This acts as the point by which the equipment sits upon the shelf.

The TR Mystery Feet are suggested to be used with source equipment, while the slightly taller VX’s can be used with amplifiers as well as source components. Over the review period I tested with a wide variety of pieces of gear in both my main and secondary rigs. In the end, I chose to concentrate on how the feet worked with one particular piece of gear. But still, all pieces except a class d chip amp showed obvious improvement in detail. 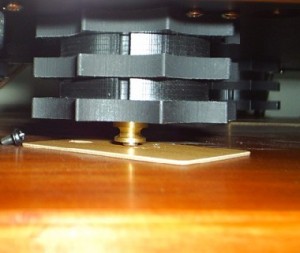 How does one fairly test that the Mystery Feet do work? It’s not easy as there was no way to quickly flip between having the feet set below the modded Jolida JD100 cd player and not. But I tried my very best, starting with having the feet set below, then removed from the underside. The switch took about 30-45 seconds, all the while being careful to handle the cdp gently. Since my rig sits on a pine table I knew that the point of each of the feet would make a significant dent. Therefore, I dug up some laminate countertop sample chips and placed them under each of the points.

Over the four months I had the Mystery Feet I went through all sorts of music trying to find songs that would allow the Feet the opportunity to demonstrate their sonic attributes. It’s fair to say that on my gear not every disc allowed for such promotion. A great deal of heavy rock just didn’t produce significant results, especially recent recording where the dynamic compression is so heavy that it interferes with any serious attempt at reviewing. I had pretty much given up on rock altogether until I popped in Born In The USA by Bruce Springsteen. There, in the detail of songs such as “Dancing In The Dark” and “Darlington County” the Mystery Feet allowed for significant micro-dynamic detail I never heard before come thru. It’s as if some background instruments, percussion in particular are pulled forward. The improvement in bass detail was immediate, tighter and punchier but with all the richness intact.

With jazz, I began with Larry Carlton’s Collection, one of my favorite “best of” cd’s, the recording quality is outstanding with not even a hint dynamic compression (although all recordings do have at least a nominal amount). The clarity of his guitar work in “Small Town Girl”, which is wonderful to begin with, had an extra bit ring to the end of each note. The highs of each plucked string sparkled just a bit more. 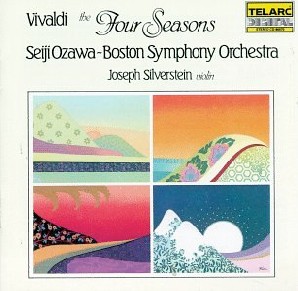 With orchestral recordings the Mystery Feet ‘s presence was fairly consistent in letting me catch the additional sonic details. I felt that the recording hall from Telarc’s Vivaldi: The Four Seasonsbecame an instrument in and of itself. Offering details that without the Feet were undefined attributes. The strings had a specific height to them that lacked focus without the feet. The real joy was the cello’s and other low frequency instrumentals.

When it comes to audio accessories the first question that needs to be asked: Does the level/value of the equipment I have on hand make sense with the cost of the accessory? If I owned a $200 Oppo dvd player as my cdp, and other pieces that raised my system price up to $12-1500, the Marigo Mystery Feet wouldn’t be where I would invest my money. However, at $3000 and above, the Mystery Feet do deserve serious consideration when finalizing your system in the same way that cabling becomes more specific.

In my main rig the Marigo Mystery Feet offered me the opportunity to peer deeper into quality jazz, acoustic rock, and classical music than I have heard before. I speculate that those of you with less than ideal shelving for your gear may well find an even more noticeable improvement in your sonic experience. If you’ve managed to acquire a terrific cdp, then the Marigo Mystery Feet may well be the next logical step in creating your killer system.