The Marantz CD5000 is an inexpensive player commonly available throughout the world made by one of the budget leaders in digital. Is it as good as some of the The owner of this player commonly records to mini disc via the optical digital output for his listening pleasure while on the go. (He also uses his Sony MD to record live sound bites and audio tracks him and his band-mates play while practising). So– good looks, pretty good convenience and facilities but a little cheap feeling (although no more than most other machines in its price range). It also includes a headphone jack on the front panel. I did no listening via headphones, not any digital recording as I do not have the facilities to do such. 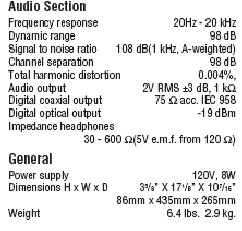 An enigma. Listening to Sharon Shannon’s “Blackbird” (Celtic Heartbeat Collection, UBD #53084), there was no apparent lack of bass, toe tapping happened spontaneously. Michael Jackson’s Billy Jean is absolutely ruthless to treble–but it was enjoyable. A little on the verge of being overly bright, but this

The front panel has an uncluttered look and looks far more expensive than it is. It appears to be black anodized aluminum. It has withstood the test of time, showing no signs of wear and remaining good looking despite heavy use. The front panel has buttons that are easy to read and the controls are intuitive. No confusing labels or “jargon type “controls are included. The buttons are round and of good size—no micro buttons and 1001 controls on this one. The display is easy to read and offers enough information. More equipment at this price level could learn from the simple but well thought out controls and display. The people at Marantz deserve honourable mention regarding the industrial design. The feel of the buttons and controls is typical of inexpensive components–they simply don’t instill much confidence. The player itself is quite light in weight, quite common in its price range. What continues to be uncommon is the inclusion of a digital out, allowing one to record to other digital formats. Apparently it can also be used as a text reader (from cd rom). was through a pair of Musical Fidelity MC2 loudspeakers (which happen to have an absolutely humdinger of a tweeter in them, the ). “Thriller” was fun to listen too as well (it almost always is!). Fundamentally the midrange seems right, but the frequency extremes are ragged. The loudspeaker boxes don’t have a canned sound to them, but that characteristic was apparent on some material. I have a penchant for listening to female vocals and generally wasn’t displeased with the results, but something just didn’t seem quite “right”. Loreena McKennitt’s “Marco Polo” ( Book of Secrets, WEA CD19404) was very enjoyable (and I don’t know why, by all accounts I shouldn’t have found it enjoyable at all). Joni Mitchell’s “Magdalene Laundry” (the Chieftains, Tears of Stone, BMG-RCA, 09026-68968-2) wasn’t unenjoyable. I really questioned the magnitude of the midrange vs. the frequency extremes. I did manage to listen to a little Jimi (Best of Hendrix, Experience Hendrix LLC, MCA, MCMMD 11671). “Stone Free” was listenable, and the production qualities are very apparent –it’s often not (Eddie Kramer’s magic at work no doubt).

The only review I was able to find via the Internet was from 2000, HiFi Choice ( ), another thumbnail review, not unlike this one. “Surprise, surprise, surprise!” (in my best Jim Nabors’ Gomer Pile caricature). A similar outcome! Now the $64 question, could I live with this player? Yes. Failings only were readily apparent when I did a direct comparison with my modified Sony PS1. The PS1 has better frequency extremes, and an overall smoother presentation. Could I recommend it to people I like? Yes. Would I sleep at night? That depends on the rest of their system. If their speakers have a slightly rolled off top end and a slightly plump bottom, then definitely. If they listen to small scale jazz or well recorded rock, hmmm, ok. And if they have speakers which simply are not capable of deep bass. Ya. Or if they simply could not or would not up the ante .