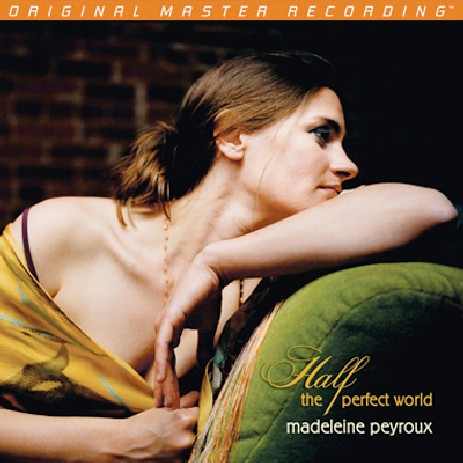 Patience is often a virtue, and never has that been more true than with this LP. Half the Perfect World was issued in CD format way back in 2006; when I heard that the LP would be released by Mobile Fidelity (in conjunction with Rounder Records), I eschewed the CD and placed my order for the two-LP set. I had bought MoFi’s earlier release of Peyroux’s second album, Careless Love, based only on the singer’s reputation and the fact that MoFi was releasing the vinyl. I had admired the company as it sought to raise the quality of vinyl in the late ‘70s and early ‘80s, and was pleased when the company re-formed. I feel that the quality of their product is higher in their second iteration than their first, but more on that later.

So I placed my order for this LP, the artist’s third, in January 2007. Then commenced a period of waiting…and waiting…and waiting… Shortly after I had concluded that the release was in fact imaginary, and was nothing more than a cruel hoax played on innocent vinylphiles, a box arrived on my doorstep…in July 2008, a full 18 months after placing the order. Mirabile dictu! It was my copy of Half the Perfect World.

For the past couple of months I’ve been listening to the album…it’s been in heavy rotation, you could say. Half the Perfect World has more of a pop focus than does Careless Love…eight of the twelve cuts are covers, including (among others) The Summer Wind, Everybody’s Talkin’ and River. These mesh nicely with a number of Larry Klein/Peyroux/ Jesse Harris compositions; it is hard for me to hear The Summer Wind without channeling Frank Sinatra, or Everybody’s Talkin’ without thinking of Harry Nilsson, but Peyroux, with her growly, smoky voice does justice to these songs. I was prepared to dislike River (a duet with k.d. Lang, who is not one of my favorite singers by a long shot), but the cut is more than solid. The newer songs fare well, too, particularly the first cut of on the album, I’m All Right. Peyroux (I assumed that she was French-Canadian until recently discovering that she’s originally from Georgia) is an excellent interpreter of this music. Her voice is not about range, but it is very much about fitting the song…in her ability to interpret a song, and to wrap her voice around the lyrics, she is one in a series of chanteuses, and a very good one at that. The arrangements are relatively spare, and allow her voice to shine through.

Half the Perfect World is (very well) half-speed mastered at MoFi by Rob LoVerde. The sound is absolutely superb, from the first bars of the first track through the end of side four. This is an album that reminds me just how good LPs can sound. The records themselves, thick slabs of vinyl, emerged from their laminated rice paper sleeves with no untoward marks, and played through without scratches, pops or ticks. The quiet surface of a CD, with the sound quality of vinyl: It’s a great combination.

In keeping with what I have come to expect from MoFi’s second iteration, the packaging is superb. The gatefold album’s graphics are high quality; inside the fold full details of the artists involved in each track are printed, as are the lyrics from the four Klein/Peyroux/Harris tracks. As noted above, the LPs are packaged in classic MoFi rice paper sleeves, which are in turn enclosed in card-stock folders and then slipped into the jacket cover. This LP is not cheap,

If you are in any way a fan of female vocalists in the pop/jazz vein, this will be an album for you. Peyroux doesn’t quite have the voice of, say, Alison Krauss, but she certainly knows her way around interpreting a song. After a hard day at work, spinning this LP with a drink in your hand sure beats a sharp stick in the eye.

1 thought on “Madeleine Peyroux, Half the Perfect World vinyl”