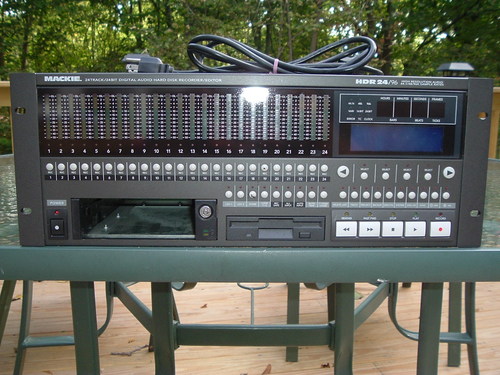 While there has been a much needed evolution in the search for the ultimate surround mixdown machine, a dedicated unit still doesnt exist that has truly become a standard. As a result, many engineers have recently begun to record back to a DAW for surround delivery. While this might work for some, not everyone is in the DAW camp yet, as some long for a dedicated recording device. Why? Well, how about the stability that comes with a dedicated box? How about the ease of use? How about never having to worry about system conflicts? How about a unit for people who are computer-phobic? These reasons speak volumes, and when you add these with many features that are also standard fare on software DAWs, you get the Mackie HDR-24/96, a dedicated hard disk recorder/editor that packs a powerful technical punch for a modest amount of money.

The Mackie HDR-24/96 is a dedicated 24-track hard disk recorder capable of operating at either 16- or 24-bit and sample rates of 44.1, 48, and even 96 kHz. The unit records directly to an internal 20 GB IDE drive, but is also capable of recording to a removable IDE drive that is intended as the primary means of backup (more on this later). The HDR has a variety of I/O options including analog, AES, TDIF, and ADAT, as well as built-in sync to all flavors of SMPTE, video blackburst, MIDI, or internal work clock, and communication to other recorders via a 100BaseT Ethernet port.

Although most of the functions of the unit can be easily accessed from the front panel, the HDR takes on more of the complexion of a computer-based DAW when a standard monitor, keyboard, and mouse are added. It then becomes a very powerful editor that is capable of large-scale functions with ease. This is a great feature in that you dont need an external computer to see the waveform to edit; all you need do is connect the monitor, keyboard, and mouse, and youre there. Actually, the HDR fits more into the category of recorder/editor than DAW mainly because it doesnt do, nor claim to do, many of the finishing functions that full DAW packages perform  namely on-board mixing and digital signal processing via plug-ins. In reality, the on-board mixing portion is of little consequence if youre using the unit to mix to from a console, although having the ability to use plug-ins would be nice. Indeed, the HDR does have the ability to do rudimentary-level automation functions that may be more than sufficient in most cases. Its possible to import mono or stereo interleaved AIFF or WAV files into the HDR, but AIFF files are converted directly to WAV files, and interleaved files are converted to two mono files. 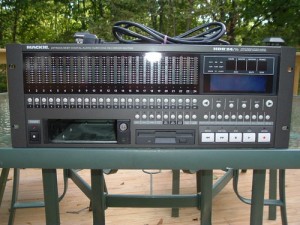 Although its editing features are made somewhat easier with the addition of the graphical user interface (GUI) when a monitor is connected, the HDR is quite a capable machine without it since the front panel provides most of whats needed thanks to a number of displays and dedicated buttons. The HDRs front panel features 24 channels of high-res metering, an LCD transport display that shows either SMPTE or bars/beats/ticks, traditional analog-like transport controls, and a number of buttons to access the many utility functions of the unit. A 24×4 LCD shows operation information, system prompts, and selection options via paging buttons. Also on the front panel is a floppy drive for system upgrades and a removable hard drive bay for backup (more on this latter).

The rear of the HDR contains a rather quiet cooling fan, a three-slot card cage for the I/O modules, a built-in MIDI port, SVGA video output, an input for either the Mackie Remote 24 or Remote 48 PRO, a jack for a punch-in/punch-out footswitch, and mouse and keyboard ports. There are also sync ports for Word Clock, SMPTE, and NTSC or PAL video blackburst. Two accessory slots are provided for future additions and upgrades.

All of this is housed in a rugged 4U-high rack and weighs 35 lbs. Any connected peripherals such as keyboard, mouse, and monitor can be standard off-the-shelf units intended for use with a common PC.

Backup for the HDR is in the form of removable 20 GB drives that are relatively inexpensive at $199 each. You can actually use any IDE drive for backup, although recording directly to the drive requires a fast spindle speed (7200 RPM). If youre in doubt as to the recording capability of a drive, theres a utility built into the HDR that will verify that the drive is sufficiently fast to record to. Another backup method that Mackie offers is what they call Mackie Project Media, which features a 2.2 GB Orb cartridge.

While all this sounds pretty good, hard disk remains the only method of backup that makes me a bit nervous. Ive never been a believer in using anything mechanical like a hard drive for long term archival purposes, and Id be a lot more comfortable if there was a way to backup directly to CD-R, DVD-R or RAM, or tape backup like exabyte or AIT. It is possible to indirectly back up to any of the above by using the HDRs built in 100BaseT Ethernet connection and transferring the files to a Mac or PC.

While its possible to run the HDR without ever cracking open the manual, there is plenty of printed help if you need it. In fact, there are actually three manuals; a Quick Start, an Editing Guide, and a full technical manual. While Mackie manuals used to be laced with gigantic doses of humor (too much for some professional users), their manuals of late have toned it down somewhat. Yes, theres still a bit of that Mackie irreverence, but its doled out in smaller portions. That being said, theres a tremendous amount of material covered in a very clean, tight presentation thats not only easy to grasp, but easy to find as well. Difficult subjects like synchronization, networking, and, to a lesser degree, editing are handled with ease. All in all, these manuals are great, and if misplaced can be easily accessed in PDF form from Mackies Web site.

If you have any DAW background at all, then you already know how to use the HDR. Without ever cracking open the manual, I was able to use the machine for most functions with absolutely no problems. One of the things that I liked best was the way that the waveforms are displayed. Now you might think that, if you record the same program into different machines, the waveform display will be same. Well they should be, but Ive found that this is not the case. The HDRs display was very clean and easy to read as compared to some that seem particularly cluttered and not as precise. Plus, you can get around the display with ease thanks to the display resolution buttons conveniently placed at the upper left of the overall display. A right click on the mouse brings a contextual menu with all the editing functions and crossfades. A list of Hot Keys or keyboard shortcuts is also available from a pull-down menu.

One of the best features is the way the HDR handles and displays multiple takes, or virtual tracks. Lets say that youre planning on redoing a guitar after youve recorded it on the basic track. You simply go to the virtual track assignment and select Number 2 and record away. You can continue up to a total of seven takes or virtual tracks per channel. But the best part is the way that theyre displayed. If you hit the Explode button, you can view the waveform of all seven takes to either choose or edit between them. This is really a time-saver, as most other recorder/editors use layers that you have to bounce between, viewing only one at a time. The HDR lets you see all seven track layers at once.

About the only editing function that I really missed on the HDR was the ability to group a number of tracks for editing. If you were editing drum tracks, for instance, it would be a lot easier to group them all together to perform an edit. That being said, you are able to select multiple tracks to edit and basically accomplish the same thing, but its not as efficient.

I did find that the transport became a little sluggish when I had a lot of edits across 24 tracks, but this is pretty normal for most workstations. This wont be an issue if the HDR is used as a 6-channel mixdown machine though, even at 96k. A nice feature is the fact that Fast Forward and Rewind have three speed levels, which are engaged by simply hitting the button multiple times.

Another feature that I like allows you to delete a file immediately if you know a take is bad. Other workstations keep the file no matter what, even though it doesnt appear in the EDL after you hit Undo, making it necessary to perform a what can sometimes be a tedious purge operation when you need to clear some disk space. Not so on the HDR, as you have the option to delete a false start or bad take right away.

The HDR-24/96 actually has a lot more functions than what weve touched on in this article, but the thing to remember is that even though it does a lot, it doesnt seem that deep or difficult to learn. Unlike other machines that give you everything but the kitchen sync, but make you hunt for each function, the HDR is laid out in a logical manner that allows you to get at what you need only when you need it, and keeps it out of the way until that time.

I found the sound of the HDR to be surprisingly good. While the converters will not exactly compare to ones costing 10x as much per channel, theyre not that far away either. If you really want the ultimate, just get the AES I/O cards and plug in a set of your converters of choice. Actually, this is necessary if you plan to use the machine at 96k, as the on-board converters dont operate at that sample rate. Also keep in mind that the number of available tracks are halved to 12, which shouldnt be a problem in a surround mix.

After having spent a lot of time on other dedicated hard disk recorders (some costing a whole lot more, too), I can say that I really like the HDR. You get a lot for your money, and its efficient layout and user interface allow you to get right to the task of recording rather than struggling with a computer. At $4999 for the basic unit (minus I/O, remotes, and peripherals), this unit is not only a bargain, but a serious piece of gear easily up to any professional task.