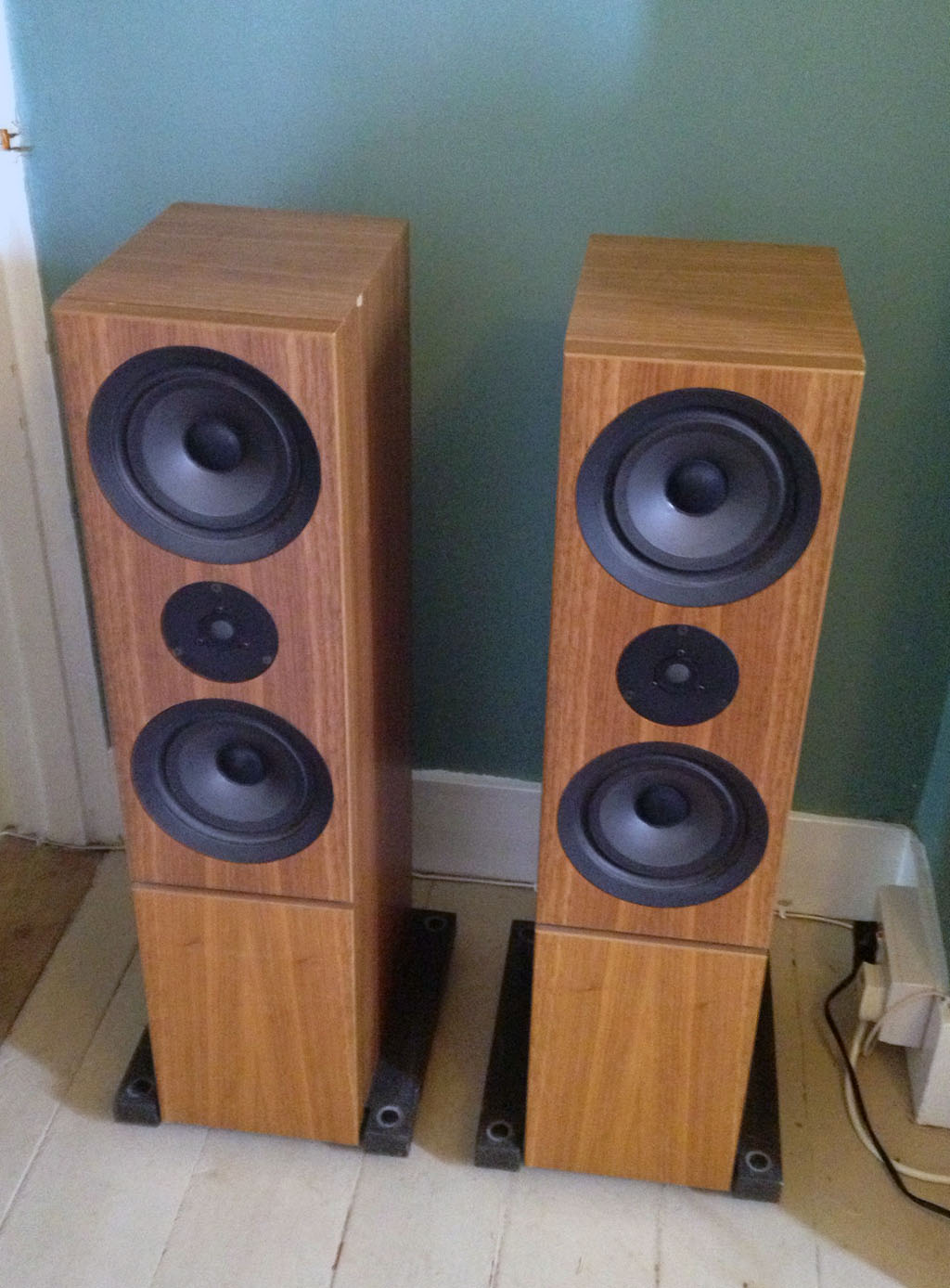 Amplifier requirements: At least 60W per channel into 4 Ohms. For example, Linn LK140. 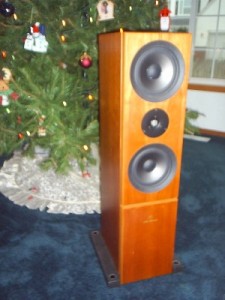 Nothing has diffused the decorator versus the audio fanatic debate as much as the change in speaker design. Until the early 1990’s tower speakers looked something akin the the monolith in 2001: A Space Oddessey. Thankfully, the “post” design came into favor, thus allowing for both music and plant stands to be combined into one.

One of the best examples of this graceful design is the Linn Keilidhs. A slim, but exceptionally sturdy short tower. I was able to procure a pair from the fine folks at Echo HiFi in Portland, Oregon.

The Linn Keilidhs can be found in either a black ash or medium cherry veneer. The pair that graced my living room was in a gorgeous cherry. No grills were present in the my model but Linn offers a unique solution to those that require such items. The front “face” has deep groves whereby a simple piece of fabric can be place with some type of elastic band. The drivers are recessed, allowing for a flat covering of the face. In this way, the grill becomes virtually transparent, eliminating sound deflections.

The Keilidhs came with the side feet affixed. This bass gives an exceptionally sturdy stance to a fairly narrow mini-tower. One is warned to use caution with the spikes, as I managed to slightly impale my palm when placing them in my car for the ride home.

The Keilidhs require some form of bi-wiring. For my own tests I used the simplist form, a jumper wire from one connection to another. My first little test is to see how they sound when using a long run of 14 gauge wire from my equipment in the family room. The Keilidhs definitely didn’t like the connection. The speakers sounded bland, lacking life, especially in the deep end. The sound stage was severely compressed. they were not the same speaker I had heard in the showroom. 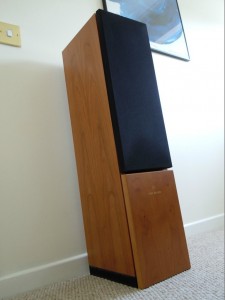 Next, I brought into the living room my Adcom 535 amplifier, Harman Kardon cd player, and my 20 plus year old Monster Cable speaker wire. I have never heard speaker performance change so drastically. The sound stage opened wide, something akin to blackout curtains being removed from London windows on VE day. Most impressive was the appearance of a whole new low octive. Bass remained acceptably tight. 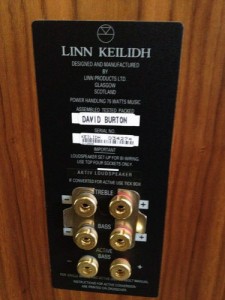 In the shop, Kurt had described the Linn’s as “mellow”. He was quite right, but in my home a new description also became apparant, a warm chestiness during acoustic guitar music. While not unpleasant, it did color the music. In addition, the bass did begin to wear on my listening, causing a slight fatigue in my enjoyment. I don’t want to over emphasize this as I am quite sensitive to boomy bass.

The mids are quite pleasant on the Keilidhs, very smooth with a hint of warmth. Brass instruments sound quite natural with a satisfying sense of sharpness. The french horns that sounded muffled with the Totem Dreamcatchers, were full and airy, giving off the impression of the openess of the great plains as it is shown in the movie Dances With Wolves.

The highs sounded quite similar that of the Celestion SL6 models. Not bright or showy, just simply content. This may be why the Keilidhs weren’t on many Americans “must have” lists. I found them quite pleasant, especially with the low ceiling in the living room. I tried a variety of piano music to try and get the tweeters to show some sense of strain, alas, nothing fazed these speakers.

I was determined to see if I could reduce the chestiness. For a final test. I took the Keilidhs out to the garage, setting them on some carpet and played my demo cd. The Dolly Parton issues disappeared, what was left was a wonderful musicality, with a sound stage of crisp instruments and just a hint of warmth. 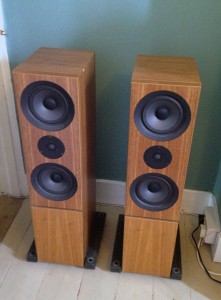 I pondered why the garage would be so special to bring out the best in these cherry beauties. Being a geography teacher the answer was only an image or two away. In Scotland, most flooring is hard surfaced (stone, concrete, hardwood) with area carpets. My home is typical North american with cut-pile carpeting above a pad and plywood, with a crawl space below. The Linns were using the natural acoustics to expand on their inherent characteristics.

Had I still lived in Colorado, or on a hillside with a basement, the Linn’s would still be there. The Keilidhs are a rare speaker, European in consistency, but with a warmth and liveliness of the best of the new world. If your in the market for a small tower, that you can support with quality wiring and a hard surface underlayment, skip some of the more famous big box names and look for a used set of Keilidhs, you won’t regret the time spent with these friendly towers.