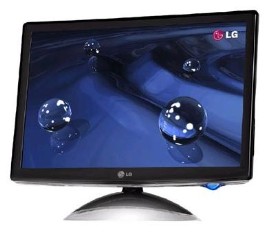 One of the many LG monitors – W2284F – that received a iF Award and was recently launched in Japan, has now been presented in the UK scene.

The 22-inch LCD monitor got the iF Product Design Awarn in 2008, and has all the features a true LCD monitor should have, like a 30,000 Digital Fine Contrast Ratio while watching movies. This feature alone makes it better than 80% of the monitors of the market, and it doesn’t stop there.

Other features on the LG W2248F include a response time of 2ms, a brightness level of 300 nits, and a resolution of 1680×1050. It boasts some LG technology, more specifically a picture enhancing chipset named F-Engine.

On the design side, the W2284F has a glossy black finish and a “soft” blue power button inspired, apparently, by a drop of morning dew.