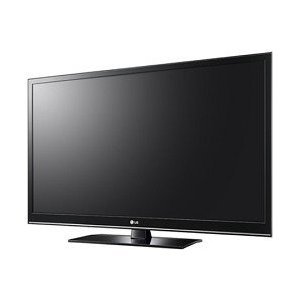 After yesterday’s rabbit punch in your wallet introduced you to something in the two grand range, let’s take a step back and give you a nice break with the LG 50PW350, a plasma television that will still pack some value, and do it in the three figure range.

The LG 50PW350 is a fifty inch 720p plasma television that offers a surprise feature–3D playback once you get all the components involved. It also offers a six hundred Hz refresh rate for reduced blurring, Intelligent Sensor to adjust brightness on the fly, Picture Wizard II to let you do the calibrating to your own needs, three AV modes to provide different settings based on your needs at the time, two ten watt speakers, a USB port, and three HDMI ports.

This one is, again, something of a mixed bag. The picture looks great, the sound not so much, but the addition of 3D is certainly an interesting one. However, 720p in a fifty inch screen will likely be noticeable unless you’re sitting a good distance away, so you may want to go the 1080p route if you’re looking for something in a bigger screen, like this. It’s something of a catch-22, really–bigger screens show resolution better, so getting a big screen 720p will look quite different from a big screen 1080p, but this one’s offering 3D, which is actually unusual–I don’t see a whole lot of 3D 720p hardware–but still worth a look.

Still though, considering that the folks out at Amazon are looking to get eight hundred and ten bucks for this, this isn’t a terrible experience, all things considered.

The LG 50PW350 will not be for everybody, but for everybody looking for a 3D experience in the sub thousand dollar range who’s prepared to accept some less than optimal features, you might do all right here.