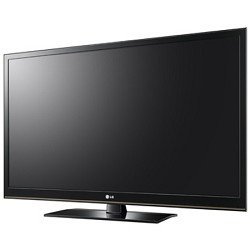 Today’s plasma television comes to us from the folks at LG, who have given us some fairly good stuff in the past and hopefully can continue on for some time. The LG 50PT350 is on the block today, but how will it fare?

The LG 50PT350 is a fifty inch 720p plasma television that offers a 600 Hz refresh rate, Intelligent Sensor technology to get the settings automatically optimized based on conditions in the room your television is in, Picture Wizard to help you do the calibrations yourself, two ten watt speakers with Infinite Surround, three HDMI inputs, a PC input, two USB ports, two component inputs, two composite inputs, an optical digital audio output, and an RF input.

Short on features, admittedly, but still–it’s a pretty decent setup. The picture is fair; with a combination of 720p video and a 600 Hz refresh rate, there’s good news and bad news there. The audio is passable, but nothing truly special. And there are certainly more than enough ports in both old and new gear to make most anyone happy, though this one will be behind the curve when it comes to streaming video. It’s good for today’s gear, and better for yesterday’s, though tomorrow may well have a problem on its hands.

And that’s not a good thing considering that you can find this for seven hundred nineteen dollars at two different places I found, which is quite a bit of cash for a television that won’t even pull off 1080p, though it’s a big enough screen so that’s something in its favor.

The end result is the LG 50PT350 isn’t a bad television by itself, but just can’t stack up well to other entrants in the field, which will do more but for less money. If you’re in the market, I suggest you start your search elsewhere.