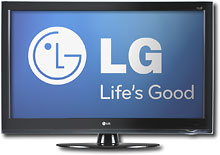 These days pricey almost universally equates with bad.  No one wants to shell out a nickel more for anything than they absolutely have to and with good reason.  People are paying down their debt, saving money, terrified of losing their jobs and all because we’re still neck deep in the worst recession anyone’s seen since the 1920s.  So in that vein, it’s not exactly surprising that people would be leery of paying too much, even for a great product like the LG 47LH40UA television.

The picture and sound both look (and sound) solid and commendable, and the controls are a fairly simple walk in the park.  Though the price is what’s likely to get some people balking–after all, this beauty does cost right around a thousand bucks at Best Buy.

So if you’re looking for a new television, don’t be afraid of that price tag–the LG 47LH40UA should be worth the money.