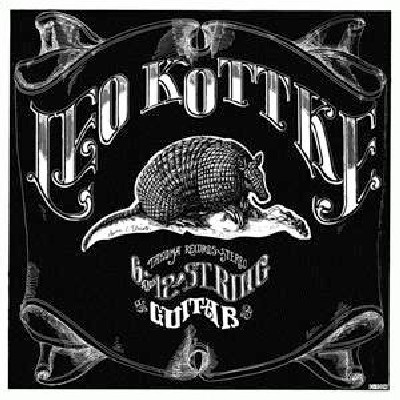 Leo Kottke is a talented and eclectic guy. Originally from Georgia, as a child the guitarist moved frequently around the U.S. with his family. It is perhaps this peripatetic existence that formed, or at least molded, his talent. And it is quite some talent… though more on that later.

6 and 12 String Guitar (an honest album title if there ever was one) was the 1969 album that put Kottke on the map. Also known as the Armadillo album (though credit must also be given to the ant pictured on the striking black and white album cover), this was not Kottke’s first effort—that would be 12 String Blues, issued earlier that same year. Nonetheless, it was 6 and 12 String Guitar that established Kottke’s reputation—and he was only in his mid-twenties at the time.

Originally issued by Takoma Records (the Santa Monica-based label of the noted fingerstyle guitarist John Fahey), this Classic Records reissue has been pressed on Classic’s new 200 gram “Clarity” vinyl, and offers 14 tracks featuring Kottke on a variety of guitars. All tracks save one were composed by Kottke (the exception is Jesu, Joy of Man’s Desiring).

This album, which has been described as “iconic” in its genre, is a masterclass in fingerpicking. In one great stroke, Kottke established a standard for technical and artistic excellence in this style of guitar composition and execution. His virtuosity resulted in meaningful danger as well: His picking style eventually resulted in tendon damage to his hand, which nearly ended his career. By abandoning fingerpicks in favor of fingertips, and using a more classical technical style, he was able to carry on.

In the 1969 Rolling Stone review of this album, Carl Brauer led off with the following: “With all the shit that has been released recently, it was a distinct pleasure to come across this album.” Now, I’d argue that a great deal of music coming out in 1969 was pretty good stuff, so this is high praise indeed. And it’s deserved. I’m a fan of the acoustic guitar, both solo (as we have here, with no other instruments and no vocals) and in small jazz groups (Charlie Byrd’s oeuvre is among my enduring favorites). The skill, the delicacy, the precision of Kottke’s playing is mind-blowing. How can someone possibly be so coordinated? And on top of it, he wrote the songs as well. Astonishing.

The lead-off track on the album, The Driving of the Year Nail, is an energetic, speedy introduction to Kottke’s capabilities. Other tracks such as the slide-influenced The Sailor’s Grave on the Prairie and Vaseline Machine Gun are particular standouts on an album where at some level every track is a standout.

This is an album that rewards careful listening. It’s not mellow background music. Kottke’s virtuosity demands to be noticed. Notes cascade like waterfalls, note upon note, without relenting. Put the book down, get comfortable in your chair and just listen.

And you’ll be happy that you listened, because what comes off this slab of vinyl sounds superb. The LP was mastered by Chris Bellman at Bernie Grundman Mastering, and will provide a daunting test of your system’s ability to resolve, and of its capacity to realistically reproduce midrange frequencies.

Classic Records has, in typical form, produced a top-quality LP. The “Clarity” vinyl is, in fact, translucent rather than transparent. On my copy (which arrived perfectly flat and flaw-free), surface noise was virtually non-existent: No pops or tics, and that “rushing” groove noise that exists on even the best LPs is as insignificant as I’ve ever heard it. I can’t say with authority that this vinyl formulation sounds meaningfully better than Classic’s own 200 gram black vinyl, but it is certainly no worse. And, of course, with its gold and black Takoma label it looks very cool on the turntable.

Packaging is excellent. This is a non-gatefold album with black and white art. The LP is enclosed in a plastic and rice paper sleeve and the cover comes in Classic’s newer Mylar sleeve. The liner notes are a hoot, from the selfdeprecating biography of Kottke (penned by the performer), to his comments on each of the tracks. Example from Jesu, Joy of Man’s Desiring: “Bach had twenty children because his organ didn’t have any stops.” Hmmm….

I don’t know how many copies of this album Classic has pressed, but I suggest that you haul yourself to your local record retailer (or to your computer) and become an owner. Even for those who aren’t particular fans of solo acoustic guitar, this is one album that is essential in a serious listener’s collection.