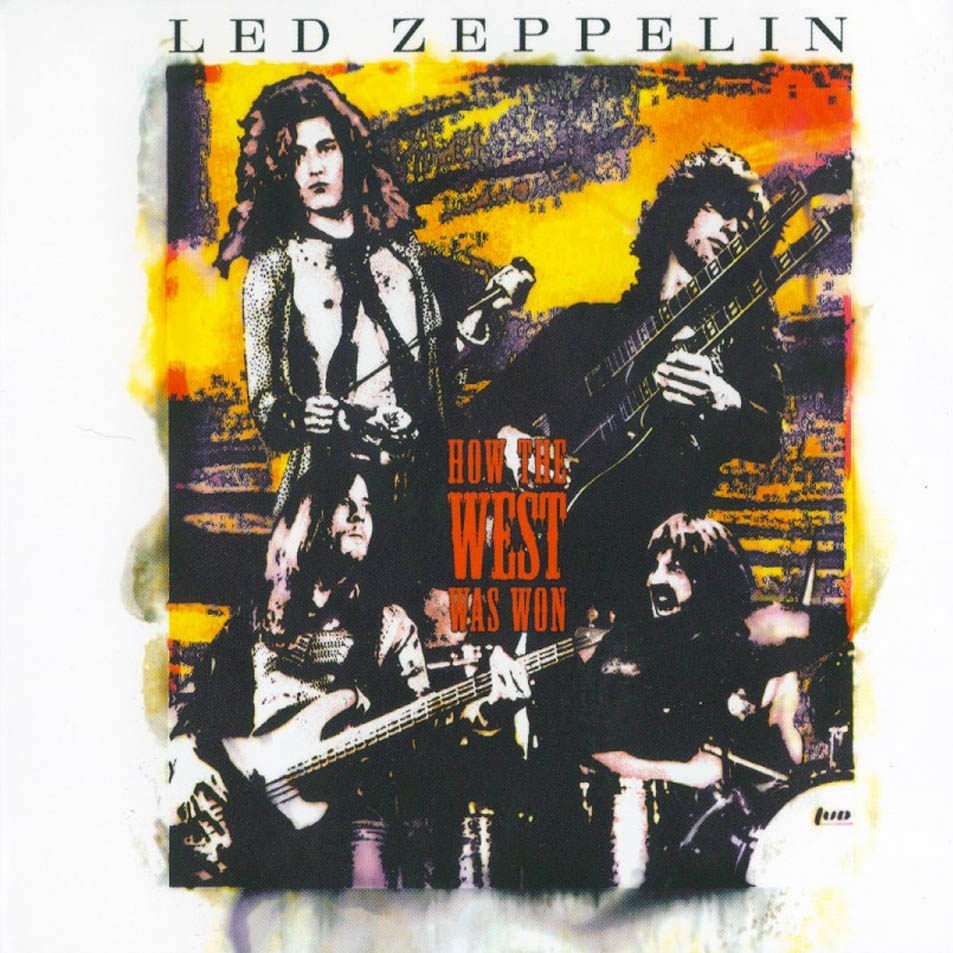 They say that you can’t make a silk purse out of a pig’s ear. Equally, you can’t make a state-of-the art jet airplane from a World War One Airship. That’s not to say a single derogatory word towards Led Zeppelin – or pig’s ears for that matter. It’s a fact, though, and one brought home to me highly conclusively after I had spent almost 24 hours listening to the DVD-Audio 5.1 Surround Sound version of the Led Zeppelin live compilation ‘How The West Was Won’, which will be released on 20th October in the UK and October 7th stateside. It doesn’t quite work and it’s a pity. Let’s talk about the recording and the concept first – not the DVD-Audio release. Don’t exit the page if you just clicked on this report for a DVD-A summary. I think, in view of what might be construed from my subsequent observations, it is right and proper that I overview the recording per se.

To begin at the beginning. It has been said that there are lesser university degree subjects than that of Led Zeppelin – and it’s true, I have children who can verify this. Millions of words have been written about their undisputed grandeur, the groupies, the posturing, the witchcraft, and the symbols – even the music is worthy of comment to some. And what music! We don’t have the room to discuss it all. In nine studio albums and the (justly) much maligned ‘Song Remains the Same’ live set, Led Zeppelin managed to squeeze more styles and skills into their songs than most bands would dare to dream of. But, without doubt, as powerful and as stimulating as Zeppelin’s recorded output clearly was, it was the stage performances that put them into the realm of untouchables. And at last this year, for the first time on disc (for we will discount the unfortunate ‘Song Remains the Same’) those who never heard them live could sup from the chalice of Gods and gain a sip of the exuberant elixir that was Led Zeppelin live.

‘How The West Was Won’, an all-new collection of Zeppelin in concert, originally released as a triple-disc CD, is a triumph – let me say that from the outset. Even the most half-hearted ZepHead could not fail to be absorbed by the quality of the recordings taken from material performed at gigs at the LA Forum and Long Beach Arena during the tour of June 1972. Jimmy Page confidently observed in the CD liner notes, “This is Led Zeppelin at its best and an illustration of How The West Was Won.” Difficult to argue with that.

A decent live album from Zeppelin was long overdue and it’s amazing it took so long. Apparently Led Zeppelin were the most bootlegged band of all time, with some 384 ‘official’ ones you can actually buy – in some safety now that the irascible Zeppelin Manager Peter Grant has gone to his grave, for he was ever given to thwacking people found to be in possession of a Zeppelin scam-disc. Zeppelin never released a UK single, hardly ever made TV appearances and went to extraordinary lengths to shun the press. From the beginning in 1968 – right up to Knebworth in 1979, the studio albums were secondary to live concerts. Zeppelin flourished through relentless flamboyant touring and naturally sharpened their act to the levels of a majestic, unassailable quality. The three compact discs manifested that with alacrity. The DVD-Audio disc would if we lived in a perfect world. But it doesn’t. More later.

As both concerts were recorded following the release of the band’s classic fourth album few favorites are omitted. From the opening ‘Immigrant Song’, which is introduced by the 14 second ‘LA Drone’ you know you’re in at the sharp end of Rock. The discs are crammed with moments of sheer joy, emotion, passion and, above all, magnificence. There are priceless performances of ‘Heartbreaker’, ‘Dazed and Confused’, ‘Rock and Roll’ and ‘Whole Lotta Love’. There are peerless performances of ‘Black Dog’, ‘Going to California’ and ‘That’s The Way’. And, pleasingly, the evergreen ‘Stairway to Heaven’, often unfairly mocked (one assumes for its ubiquity) receives one of its best ever presentations. Recorded during the Long Beach concert, Robert Plant is unnervingly accurate in his delivery, delightfully strident in his staging. The song needs no describing, but the build-up from ballad to ballistic is quite exhilarating – the best version you’ll ever hear.

But, obviously, not everyone will like this entire offering. Some may find Plant’s twittering and squealing (once capable of inducing audience orgasms – and we’re not just talking girls here) a trifle tiring – they’re certainly dated. And, although the blistering performance of John Bonham’s sticks and skins on the mighty drum-roll ‘Moby Dick’ is one of his finest, quite simply not everybody likes twenty-minute drum solos. But these are preferences rather than performance faults.

I was lucky enough to have seen Zeppelin live from very privileged positions from 1968 until the end. This honor – for it was indeed just that – will not be bestowed ever again (I fervently hope). For many Zeppelin admirers since 1980 this is the only way to hear Led Zeppelin at their peak. ‘How The West Was Won’ is an absolutely perfect example of unfettered raw brilliance. It firmly demonstrates why Led Zeppelin were, and still are, the greatest rock group ever. Buy it – because you know there will never be another band like them.

And so, to the 48kHz 24-bit DVD-Audio release. It differs from the 44.1kHz 16-bit CD version in that, apart from filling only two discs, you get a photo-gallery (an image accompanies each track) as well as some fairly commonplace DVD-Audio features. I noticed, rather to my amusement, that ‘Dazed And Confused’ lasts 2 minutes longer on the DVD-A than it does on the CD. The final track, ‘Bring It On Home’ lasts 3 minutes longer on the DVD-A. You can’t play the disc on a CD player, by the way, so that’s an extra 5 minutes of music on the DVD-A for those of you blessed of a parsimonious disposition!

More seriously, the first thing I am obliged to mention is the annoyingly poor packaging. The CD version is only marginally better, I fancy, but the DVD-Audio discs have to be prized from the crab-grips within the jewel-case with some mighty force to release them. Tut-tut, Atlantic.

And the DVD-A has a few more problems when placed in the disc tray for listening, I fear. It doesn’t suck, it just displeases. To challenge the DVD-A to its limit I auditioned the two DVD-Audio set on a Meridian 800 Series DVD-A System with digital speakers in a 5.1 surround array so, to be fair, we’re talking about 1970s recording techniques being asked to perform to 21st Century digital relay standards. Despite some diligent and without descending to sounding patronizing, well-meaning and, certainly proficient, modern mixing it doesn’t quite happen as it should. Nagging faults, if that’s the right word, come to light, such as the production, predominantly Page’s domain (forward and overloud, often discordant, guitars for example) with delicate work from John Paul Jones well to the rear, almost lost. Even some of Bonham’s drum-work – and this takes some believing – are a tad behind the scenes. The similar mix doesn’t help much. The CD sounds somehow clearer to my ears. I thought I’d leave further comment, to Stuart M. Robinson, who has also heard the disc, otherwise my review would be a little unusual for High Fidelity Review, in that I have chosen to concentrate on the content and detail of the release as it is. 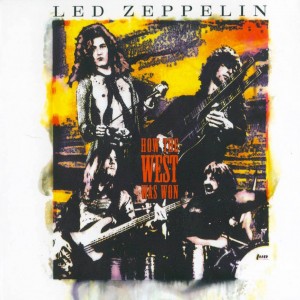 As I say, it’s not bad, by any manner of means and it brings home the often repeated axiom that Led Zeppelin were so good that rudimentary chrome tapes of their concerts, taken from a microphone tied to a broomstick held aloft at a live concert were worthy of a listen. Well, they probably were. But we’ve moved on. The Hammer of the Gods was not in the total Digital Domain methinks. I bet the vinyl pressings are wild. And, I wonder. Did anybody tape any of these gigs using a mike on a broomstick?

Of course, without my tongue in my cheek, I’m aware that both the L.A. and Long Beach gigs are available on bootleg CD (and thanks to those who are already pointing this out). I own a copy of ‘Burn Like A Candle’ (Los Angeles gig), along with some 320 other Zeppelin bootlegs on vinyl and CD but am reluctant to mention it… Maybe I still live in fear of Peter Grant. We never mentioned the ‘b’ word when he was around!

Led Zeppelin Video from How The West Was Won album