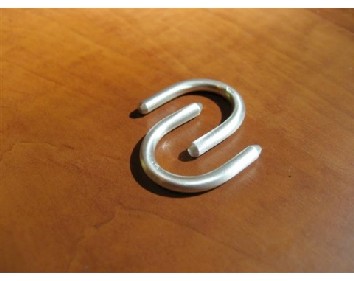 I have a soft spot to tweek experimentation, but not a blind faith. There are too many charlatans out there to accept claims at face value. But trying things out is ok, if it doesn’t work I get my money. Which leads me to my first rule of tweeking, never buy without a solid money-back guarantee.

When I stopped by our publisher’s home to pick up the Elemental design speakers, Mark handed me a set of pure silver LaJoie jumpers to give a try since I have a variety of used gear. My stock jumpers had long since disappeared from my Harman/Kardon 660 Integrated amplifier. I was naturally curious as to their ability to block out unwarranted noise. The SJ1’s fit perfectly, a nice tight connection, but not squeezing the two RCA female jacks together. I did a lot of classical listening before turning off the amplifier and installing the jumpers.

In my opinion noise level was reduced, strings and woodwinds had a slightly clearer presentation. Less hiss from the tweeters, which I was quite happy with to be honest as the HK 660 does seem to accentuate that frequency a bit more than my Yamaha C-840 receiver. I have no problem recommending the LaJoie silver jumpers, especially for those owners of the grand wood-sided/silver faced receiver of the late 1970’s, the improvement is worthy of the price.

For the three years I’ve been publishing A$$A, expoused the view that I’m a pretty healthy skeptic when it comes to tweaks. I have a hard time supporting such stuff when spending time finding a proper placement for speakers that has a much higher reward without costing anything but time. But still, from time to time I do get curious and want to know about certain accessories. Kurt Doslu at Echo Audio knows my feelings, and suggested to the maker of the LaJoie jumpers to send a sent a pair out to me for review. I’ve received audio items in all sorts of packages over the years, but this was the first time I’ve ever seen a wax sealed envelope straight from the Middle Ages.

The SJ1 silver jumpers are .999% (you get the point) pure silver, which is known by many to have terrific audio properties. The jumpers are hand made and can be molded to any size. That is good news for those who own equipment that manufacturers attempted to single out by creating unique distances between jacks.

With the equipment I had on hand I had but two testing options, first was placing the jumpers in the mm phono jack stage of my Adcom GFP 555 preamplifier. I’ll be honest, the GFP-555 is a very subdued preamp, something that I believe was designed on purpose to combat the slightly harsh sound that the Adcom GFA 555 amplifier can present. The only time I was convinced that a difference was present was while played an album during my review time with the Emerald Physics CS2 speakers. It was that tough to spot the improvement.

Later on, I pulled out my Harman/Kardon 680i receiver, a unit I bought in the past year off of eBay as a ‘celebration” of my years with the same model while in college. Like the Adcom, it has both MM/MC phono selector RCA jacks. I had a vague memory of RCA terminators coming with the unit for covering the unused set of jacks, but I could be wrong. On the receiver I was able to quickly notice a difference between the jacks being present or not. Detail was enhanced, with a greater richness in instrumentation especially the woodwinds.

For those of you looking for jumpers and want more out of your equipment without breaking the bank you could do far worse than dropping the $75 on the SJ1’s. They do work, just make sure to measure before you order.