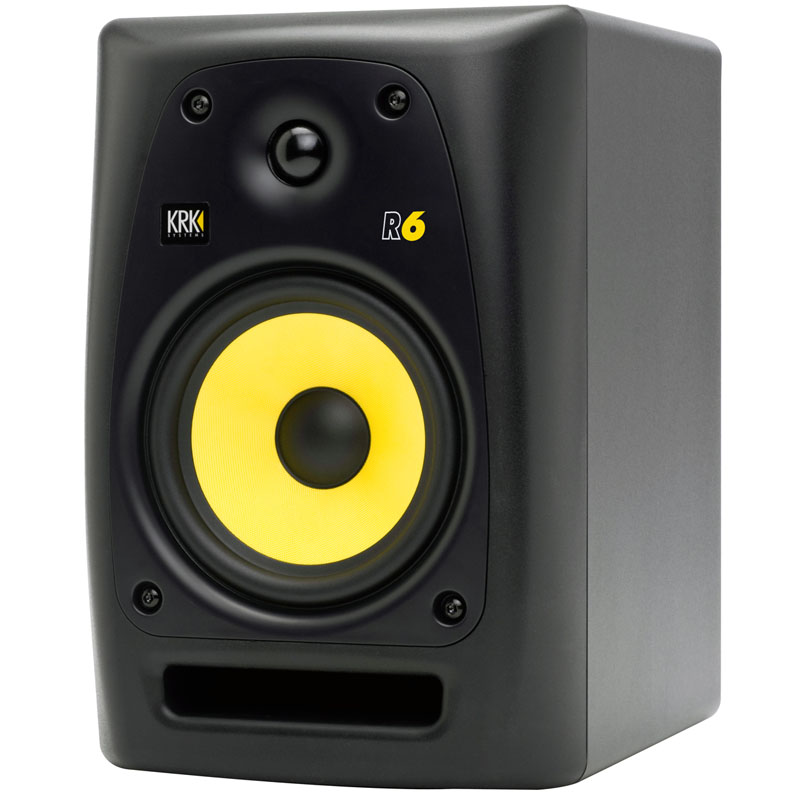 While almost driven to the brink of extinction by the overwhelming popularity of modern active (powered) nearfield studio monitors, passive (non-powered) models remain very useful mixing tools and the folks at KRK Systems, among other manufacturers, realize that. Thus KRK’s R6 Reference Monitor Speaker offers impressive performance at what I find is an incredible value — $150 each, street.

The KRK R6 is a two-way speaker featuring a one-inch neodymium soft dome tweeter and a six-inch glass aramid composite cone woofer, the latter of which features the yellow driver our industry directly associates with this manufacturer. Below the woofer resides the front-firing port, approximately the same width as the woofer and one inch tall; likely because of non-circular shape, the port does not “huff and puff” as some front-ported nearfields do under bass-heavy, high SPL performance conditions. Rear panel features are predictably spartan: only input connectors, two high-quality, five-way gold-plated binding posts.

While not as radically rounded as its upscale relatives — KRK’s VXT and Expose powered monitors — it does offer a curved front baffle design, which KRK claims to eliminate diffraction distortion. Also, the construction of the R6 is more of a traditional box style speaker in comparison to the unibody style of build in the VXT and Expose, with standard MDF comprising the sides and back of the cabinet. That said, the R6 is built to very high (above average) pro audio standards, especially considering the price point.

Over the span of several months, I incorporated the R6 into multiple environments: my standard studio monitoring setup next to my standard studio reference, a KRK VXT8 active nearfield pair; a location tracking setup, a makeshift control room alongside a ATC SCM16A active nearfield pair; and finally, into my home A/V system as the main stereo pair, powered by a consumer receiver/amplifier (Onkyo TX-8410).

The R6 seemed to share some familial characteristics with the VXT8, most notably in the fullness and extension of its low-end response and its frequency response; KRKs generally offer deep bass. The R6, however, when compared to the VXT8, provided slightly smeared vocal transients, less definition between midrange mix components, and simply a denser overall sound; the R6 was just a bit more pedestrian in its performance all the way around. When compared directly to the ATC monitors — as you would likely expect — these characteristics were further emphasized.

Overall, I found the R6s to be quite truthful in translating “the big picture” of mixes. They are very enjoyable recreational listening speakers and, I believe, incredibly useful in judging mixes. I made some key (and arguably crucial) mix decisions using the R6 in the home theater environment (doing some “real world” secondary listening) as well as A/B-ing R6 and VXT8 pairs in my studio setting. Mix elements that sounded unclear or less than defined to taste via R6 were re-addressed in final mix revisions, which in turn made them sound even better via VXT8, ATC, and everywhere else I heard the finals.

New applications of passive nearfield monitors in studio environments are rare, at least it seems that way from my observations. But old speakers eventually wear out, innovation in performance continually evolves, etc., and recordist/mixers with amplifiers they like and are comfortable with will likely need a new, good and affordable reference speaker somewhere, at some point. The R6 fits this bill: a great passive reference speaker at an even better price. It does “real world” beautifully, and more: not bad for a $150 passive speaker.