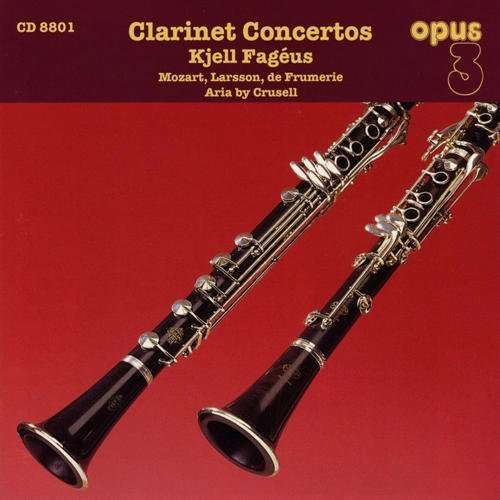 One of the hardest difficulties encountered in recordings of the late Brahms chamber works with clarinet is that of finding a soloist with the right temperament. Intense, virtuosic solo stars such as Richard Stolzman are very impressive, but sometimes their individuality is a roadblock to the necessary interaction with the other performers. On the other hand, an orchestral player too used to being restricted by the boundaries of large group playing can come off as not sympathetic enough to the constantly shifting moods of such pieces as the Clarinet Trio, Op.114 and the Clarinet Quintet, Op.115. Or else, he or she too plays the role of haughty star. Swedish clarinetist Kjell Fageus is well situated, however, having a declared preference for small ensemble playing, and his ability to communicate without dominating makes this release enjoyable.

Although it is lesser known (and less self-consciously “serious”), the Clarinet Trio in A minor is definitely the feature item on this recording. Although Fageus does not eliminate memories of the very special (and rare) Westminster recording from the early 1950’s by Leopold Wlach, he stands proud with a broadly lyrical performance. Indeed, it could be said that Fageus displays a clarinet tone that is not far from the legendary “somber silver” of Wlach, who was principal clarinet of the Vienna Philharmonic in the 1930’s. Like Wlach, Fageus knows where to push and where to hold back in Brahms, as such densely scored music can become wearing if performed too relentlessly. Best of all, Fageus comes close to matching the strange, elusive magic of Wlach’s rendering of the closing moments of the first movement of the Clarinet Trio, a passage of rising mists seen through the half-light of dusk. Matching Fageus in warmth and intensity are the noted cellist Mats Lidstrцm and the pianist Bengt Forsberg, famous as accompanist to star soprano Anne-Sopie von Otter.

For many listeners, though, the B minor Clarinet Quintet is the more important piece. For comparison, I went back and revisited two recordings: First, I reacquainted myself with the classic performance by Karl Leister and the Amadeus Quartet from the 1960’s on Deutsche Grammophon. Second, I examined the more recent BBC release by Ronald van Spaendonck and the Szymanowski Quartet. The Deutsche Grammophon recording was the first of three recordings of the piece made over the years by Karl Leister, who was principal clarinet of Herbert von Karajan’s Berlin Philharmonic at the time. I have not heard his later recordings of the piece, though I would like to. A performance, which would combine his suave technique with a more committed interaction among the players, would be a dream come true. But in the 1960’s, perhaps Leister was too excited about headlining the recording (as opposed to being just another soloist in Karajan’s virtuoso orchestra), and he tends to dominate the Amadeus Quartet, who are not consistently engaged throughout, although sparks do sporadically fly, such as in the gypsy cadenzas in the slow movement, where Leister passionately interacts with the quartet, while also displaying an ability to run the gradient from silky smooth tone to stern steel. The ending also has great impact, and the close-up recording helps, although it is a bit harsh in other places. The recent BBC release also has much going for it, including an impressive roster of young performers. But they have a tendency to lay it on a bit heavy-handedly, making their performance seem slower than it really is, though this applies more to the Szymanowski Quartet than to clarinetist Ronald van Spaendonck.

Turning to the recording at hand, Fageus is a very technically adept player, albeit without the breathtaking sheen of Leister. Not that this is necessarily a bad thing. Leister at times seems to regard the work as a vehicle for his remarkable technique, whereas Fageus quite rightly seems to be working from the inside of the music out, without drawing attention to his instrumental prowess. The peak of Fageus’s contribution is in the Adagio’s gypsy-influenced passages, where he reaches a burning intensity that is truly moving.

But there is also a sense of inequality in the Quintet performance. It does not feel as if Fageus makes any attempt to overshadow the players of the Talekvartetten, but that rather they tend to defer to him as a “first among equals”. It remains debatable how appropriate that approach is. Granted, the clarinet certainly stands out from the texture of the other instruments, all strings, and cannot possibly hope to just “blend in”. So the string players are forced to acknowledge the clarinet as a distinctive presence within the sound-world of Brahms’ piece. But the clarion cut of the instrument’s sound also means that it can make itself heard without any additional help from the strings. Therefore, it will dominate things unless the string players step up. The Talekvartetten, however, seems overly willing to underplay their parts in deference to Fageus, although this impression may be partially due to the live recording, which has the microphones slightly moved back, compared with the warm intimacy of the Trio recording. Suffering most of all from this lack of steel is the very end of the Quintet, where the sudden loud B minor chord lacks sufficient impact, not to mention the fact that its coming is rather spoiled by the noisy intake of breath by all the players right before it hits. And not least problematic of all is the Talekvartetten’s relentless vibrato. Fageus constantly changes the tone of his playing, whereas the string players firmly entrench themselves in a rather outmoded vibrato-laden approach, which becomes fatiguing as the work progresses (not that most other recordings are free of this approach, though). In isolation, the piece would earn a 70% performance rating, in comparison to the 90% I would award to the Trio in a minor.

Opus3 has made many impressive recordings over the years, many of which feature woodwind instruments. The A minor Trio recording here stands firmly in that tradition, with the multichannel options adding depth and presence to the natural warmth of the DSD recording. Fageus and Lidstrцm are to the front, left and right respectively, with Forsberg’s piano resounding richly behind them. Interestingly, the recording was made with only four channels: front left/right and surround left/right. The center channel and subwoofer channels were not utilized. Although I generally prefer to hear the center channel used, the omission here can be easily defended by pointing out how much the clarinet’s dominance would increase if its sound were more focused. The subwoofer is admittedly something that would not be used a great deal with music of this sort.

The live recording of the Clarinet Quintet, again in four channels, is rather less ideal. Perhaps because of its live provenance, the microphones seem to have been placed further back than is customary with Opus3, thus losing considerable warmth and intimacy, and somewhat emphasizing the strident tendencies of the Talekvartetten’s violinists. The sound is very affable to the viola, however, which rings richly in many passages. There is a natural concentration and flow to the performance, though, no doubt helped by the fact that the recording is an unedited ‘take’ of the live concert. Most remarkable of all is the rapt stillness of the Swedish audience, who erupt into noise only during the final ovation. Many listeners dislike applause on recordings, but I generally welcome it, as it helps define the sense of occasion. Quite specifically in the case of the multichannel tracks here, it helps define where you as home listener are in the hall: Center a few rows back, with people in front, around, and behind you. Otherwise, the surround information is very subtle, with no strong bounces coming from the surround speakers. In most parts of the piece, I wasn’t even aware that they were on until I went back and played the passages in their SACD stereo format, where they lose depth and shape, although they still feature a greater warmth and texture than in the hybrid stereo CD layer.