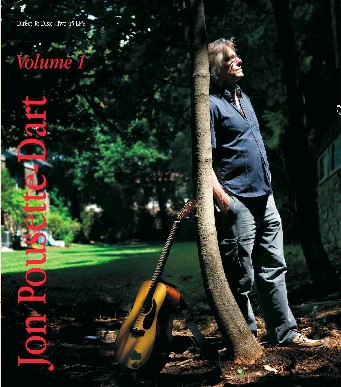 As are many, if not most, music enthusiasts, I’m a sucker for music that takes me back to my teen years. I’ll forego for the moment the rambling commentary on why this seems to be so, but I hope that the reader will understand, and even empathize, with this situation.

Walking directly out of my increasingly distant past comes this test pressing of Jon Pousette-Dart, performing eight tunes spread out over four 45 rpm sides. Back in the mid-seventies, when I was making the transition between high school and college, the Pousette-Dart Band was big on the campuses of the North East. Memories of the first rock concert I ever attended are indelibly impressed in my consciousness: Livingston Taylor opening for the Pousette-Dart Band at the Paradise on Commonwealth Avenue in Boston. A sadly truncated oeuvre of four studio albums released by Capitol from 1976 to 1980 is the only legacy of the band qua band: the self-titled debut album, Amnesia, Pousette-Dart Band 3 and Never Enough. (There was also a live album called The Pousette Dart Band Live at Sigma Sound, Philadelphia that was released between  Amnesia and “3”. It’s hard to find, but being a PDB completist, I’ve located a copy.)

Most people, as I later discovered, don’t know the band. I’ve tried and failed to describe their music as “soft rock” or “folk rock” or “kinda similar to the Eagles or Pure Prairie League”. Their sound was unique, and probably stemmed from their 1973 origins as a string band in Cambridge, Mass.

The purpose of this history lesson is to lead into the importance of the band’s eponymous leader, Jon Pousette-Dart, son of American abstract expressionist painter Richard Pousette-Dart. Pousette-Dart defined the sound of the band, and has continued to record and release albums since the band broke up in 1981. For this album, Pousette-Dart appears with his voice and acoustic guitar to record eight tracks on this very first catalog issue of DirectGrace Records.

Before discussing the LP, a few comments on DirectGrace are in order: The DirectGrace Project, initiated by Peter Ledermann, President of The SoundSmith, is dedicated to recording, producing and distributing high-end LPs with proceeds to benefit organizations fighting poverty and the abuse of children. DirectGrace sells the LPs and the John Herrick Jackson Memorial Foundation distributes funds to children’s charities. More information about this endeavor is available from the

There are currently six records available directly from the website. Current pricing is for test pressings; the “upgraded” final signed pressings are expected to range in price from $100 to $150…80% of which will be considered a charitable deduction for income tax purposes.

It’s a nice feeling to think that your purchase of an LP is helping vulnerable kids. It’s an even nicer feeling when you really enjoy what’s recorded on the LP. Let’s start with the technical side: This record was recorded direct-to-disk on a Neumann VMS 70 Lathe at the SoundSmith’s studios. Two AKG microphones were used, and there was no EQ or compression (nor any other equipment at all) in the signal path. Ledermann is credited as producer; engineers are Craig Dick and Emanuel Cregan. Direct-to-Disk mastering was done by Ledermann and Carl Rowatti (of Trutone) in the SoundSmith’s facility in August 2008.

It’s nice to be able to read in such detail about the recording and mastering details. Even nicer to listen to the result. There is a tremendous sense of intimacy on this LP, a real “you are there” feel that eliminates any sense of a veil between the listener and the performer. I’ve long felt that an orchestra resides inside every acoustic guitar, and this album is living proof of this. While Pousette-Dart’s voice has certainly had a few miles put on it since the heyday of PDB, it melds beautifully with his guitar. And the songs…

Whether or not you were a fan “back then”, these eight tunes should please. Three of the songs are from PDB’s Capitol albums: All Your Lonely Hours from Pousette-Dart Band, and County Line and Fall on Me from Amnesia. The remainder are from Pousette-Dart’s solo work. I’d be economical with the truth if I didn’t admit that the three PDB tracks are my favorites; the version of County Line is particularly wonderful. But this view is surely at least part-sentimental. The other tracks (particularly the gorgeous Waiting Game) are excellent as well. And as noted above, the superb sonics are a treat throughout.

DirectGrace warns that these test pressings may have “defects such as higher than normal groove noise, slight warps and such.” If the record is unplayable, they will replace it for you. In this case, I did notice more groove noise that you typically hear with really high-end audiophile vinyl. And both LPs had slight dish warps that made playing them on my Transcriptors turntable very challenging (no problem on the Linn, however). Bear in mind that the final production copies should not be thus afflicted.

The two LPs are packaged in a single-sleeve form factor, with attractive four color photography and graphics. The LPs are contained in vinyl-lined paper sleeves, and the entire package is contained in a re-sealable Mylar outer sleeve. It’s a nice package, if not quite at the level of the Classic Records or Music Matters reissues.

I’m delighted at the DirectGrace initiative, and hope that there are enough well-heeled vinylphiles out there to spring for the full-priced LPs. (Of course, some easy math reveals that if you are in the 33% tax bracket, the after-tax cost of a $100 DirectGrace record is actually $73.60…thank you Uncle Sam.) If this album is indicative of the care taken in creation and production of all of these albums, then it will be an auspicious start.