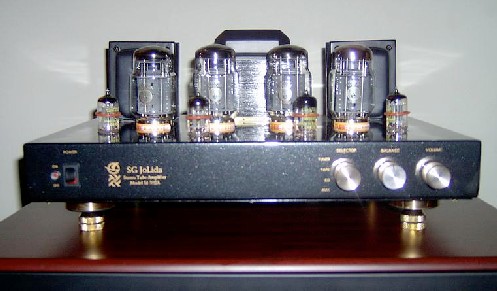 I just had to do it. You know what I mean – try some tube gear. I wanted to know what the fuss was all about. Was it hype or was it for real? There was only one way to find out. Besides, I thought those tubes looked cool anyway, so I took the plunge.

My first foray into tubes was a Jolida SJ502A (only cosmetically different than the 502B). I bought it because of the great price ($650 used) and good reviews. My previous system consisted of a Musical Fidelity A3CR preamp and Odyssey Stratos amp. Both of these components were replaced by the Jolida. At the time, I figured I was taking a big risk because I really enjoyed the Musical Fidelity and Odyssey Stratos, but I sold them and purchased the Jolida. I will admit, at the onset, that the Jolida in stock form, was a substantial sonic improvement over my previous solid state gear. And that’s saying a mouthful. At the time of purchase my system consisted of the following:

The aesthetics of the Jolida are either a “I love it” or “It sucks!” There’s no middle ground. It looks like a laboratory prop from the set of a 1949 Frankenstein movie. But that’s precisely what I found appealing about it. The industrial look may not bode well with your significant other, but once you turn it on, dim the lights, and play some mood music, she’ll forget about how you look (err, I meant she’ll forget about how the amp looks).

The moment I turned the Jolida on, my first thought was the room suddenly became too small for the music!!! I thought I had an expansive soundstage with my previous system, but the tubes had taken the concept of soundstage to a whole different dimension. As the name implies, it appears as though the sound was actually coming from a stage. The Jolida made my system sound more like a live performance.

The vocals were much, much more airy -like a singer should sound if you were hearing them perform it in a concert hall with great acoustics. Plain and simple, the Jolida sounded more like music than my previous system. The solid state gear I had, although extremely good, was a bit clinical and a tad harsh. I didn’t know it was harsh until I heard the Jolida. The tubes cleaned all of that up. There were songs that I used to skip because they were too bright, but with the Jolida, no song was off limits. Essentially, the Jolida created a zero fatigue factor.

Interestingly, when I turned the volume up very high, it didn’t sound harsh at all. The volume on the Jolida (60 wpc) went as high as my solid state Odyssey (150 wpc).

Since the Jolida does not have output jacks, I had my subwoofer connected to my CD player (it has two pairs of outputs!). This blew me away because I now had much more control over the bass. In fact, I had to turn it down a few clicks from its previous setting.

Many people say that tubes aren’t known for pumping out loads of bass. However, after owning the Jolida for two years, I’d say that the Jolida provided this bass-head with all the wonderfully clean bass I could want.

A couple of minor issues should be mentioned – the build quality was not high-end caliber. When I opened her up, I noticed the soldering was sloppy and some of the parts appeared inexpensive, and the volume knob is noisy. Since my particular amp was one of the initial production models, Jolida has made numerous improvements in this regard, including adding a higher quality volume pot.

Secondly, the detail was more pronounced on my previous system. However, this was a function of the tube complement. Once tubes were changed out to ElectroHarmonix 12AX7s and 12AT7s, and the power tubes were switched to EH KT88’s, the detail was phenomenal. After doing some tube rolling, I eventually settled on TungSol 6550’s, Groove Tube 12AX7M’s, and Mullard 12AT7s. This tube complement offered a laid back presentation for my taste in music – jazz and light vocals.

One of the nicest benefits of buying the Jolida was being able to sell my Musical Fidelity preamplifier and Odyssey amplifier. With those funds, I purchased the Jolida and had about $400 left in my pocket. Better sound for a better price. Gotta love it.

Let me just say that once I got my ears on the Jolida, I don’t plan on going back to solid state.