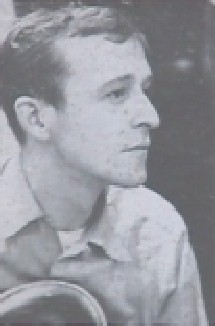 Jimmy Raney, one of the great unsung heroes of bebop jazz guitar was born in Louisville, KY, in 1927. He moved to Chicago in 1946, where he played as accompanist to piano player Max Miller. He also worked with Artie Shaw and Woody Herman before moving to New York City in the late 1940s. Here, he teamed up with tenor saxophone player Stan Getz, with whom he recorded extensively from 1951 to 1952. He replaced Tal Farlow in the Red Norvo Trio in 1953, and remained with him until some time in 1954. He worked in and around New York, including working in Broadway theater pit orchestras until he returned to Louisville in the 1960s.

While away from the jazz scene, Raney taught music, took a number of classes in music composition, and learned to play the cello. He had a very musical family, too. One son, Doug, grew into a fine jazz guitarist in his own right, who has lived in Europe for over 25 years. His other son, Jon, is a jazz pianist, who also maintains a blog site and forum.

In the 1970s, reinvigorated, Jimmy returned to the spotlight, recording for several labels, and touring extensively. He spent a lot of time in New York at the late, lamented Bradley’s, where he often played in duets with fellow jazz guitarist Attila Zoller. One such recording, though poor in quality, was available for a while from emusic.com. He continued to tour and record in the 1980s, often with his son, Doug, in Europe, though he hated to travel. Over a 30 year period, his hearing deteriorated due to Miniere’s Disease, often making him completely deaf. When the symptoms let up a bit, he was able to play, usually by sitting close to the bass, where he could feel the vibrations to help him keep time, though thankfully his own sense of time was superior. He was also often seen awkwardly putting his ear to the rim of his guitar to pick up the vibrations, to help him play, and even with these limitations, his recorded output was uniformly superb. His last recorded performance was on a tribute to Wes Montgomery CD, recorded in the early 1990s. Soon after, he suffered a devastating stroke, which left him in a vegetative state for several years, before finally passing in 1995.

That’s the chapter and verse bio of Raney, one of my all-time favorite players. I hope I will be able to convey his masterful playing in the rest of this blog.

The sides with tenor saxophone player Stan Getz in the early 1950s introduced to the world an extremely talented guitarist with superior bebop sensibilities. One of the things, to my mind, that distinguished Raney from many of the other early bebop players was his sense of time and space. He was unafraid to use musical rests to let the previous musical statement soak in more fully. He was capable of playing at a rapid clip when he needed to (almost a requirement with early bebop), but could also play ballads with equal skill and aplomb. While not necessarily the most skilled chordal player (though his chordal solos and comping had a very distinctive sound that I could easily recognize), he was able to use “the right chords” where they were needed, especially when “comping” with other musicians, but single-string solos were his main forte. His recordings with Norvo, while technically excellent, were, in my estimation, probably not the most satisfying for him. He was forced to play in a very different style than he was used to, as if Norvo pushed him to sound as much like Tal Farlow (the guitarist with whom the Red Norvo Trio achieved its greatest fame) as possible. Later recordings with Dick Garcia, Bob Brookmeyer, and others were much more satisfying. He could play light, melodic swinging pieces, all the way up to blisteringly fast bebop, often with a decidedly “outside” feel.

His 1970s recordings on the Xanadu label demonstrated he hadn’t lost anything, and in fact, was better than ever. Albums like Live in Tokyo, The Influence, and Solo also demonstrated his compositional skills as well as his technical chops. Like a lot of guitarists who found it difficult to convey exactly what they were looking for from other guitarists, Raney seemed to prefer to overdub himself as accompanist. His first album as leader, A, on Prestige, demonstrated this with skill and above all, musicality. “The Fugue” on his Solo album on Xanadu, while technically not a fugue, was a fascinating display of contrapuntal movement between two guitars (both Raney). He could play a tune in entirely different tempos, conveying a totally different “feel” when the mood or situation required. A great example of this was the tune “The End of a Love Affair”, which was done as a slow ballad on the Solo album, and on that last recording from the 1990s, Project G5: A Tribute to Wes Montgomery, was a blisteringly fast, swinging piece with guitar, organ, bass, and drums that was just breathtaking. All in all, a great way to go out. 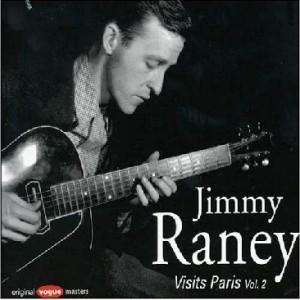 For you equipment junkies out there, he was most often seen in the late 40s and early 50s with a first-generation Gibson ES-150 (the so-called “Charlie Christian” model). In the 60s and 70s, he mostly played either a Gibson ES-175 or an ES-350. In his last years, he most often played a custom-built Höfner Attila Zoller model, a gift from Atilla, which his son Doug now owns.

His guitarist son, Doug, is very much his father’s son, and while Doug has developed his own voice, especially in more recent years, his father’s influence is certainly there. In fact, the first time I heard Doug, I thought it was Jimmy. I was on a bus in Bodø, Norway in about 1980 (long story…), and heard this wonderful duet, and had to have the record. The tune was still playing when the bus arrived at my destination. I raced out and went to my room, unearthed my radio, and caught the final notes, after which the announcer, in Norwegian, of course, announced the tune. Thankfully, I didn’t need a translator to understand Chet Baker and Doug Raney! A few years later, according to son Jon, Jimmy heard the same recording and thought he was playing. Jimmy and Doug recorded three or four albums together in the 1980s, on the Danish Steeplechase or the Dutch Criss Cross labels. All are uniformly excellent.

Jimmy Raney recordings, while a little hard to come by, are worth the searching. Amazon.com carries pretty much everything currently available on the Steeplechase, Criss Cross, Xanadu, Prestige, Roulette, and Vogue labels. There are only two downloads on Amazon.com. Emusic.com (DRM-free downloads) offers three albums from his Xanadu days, along with A from Prestige. If I had to choose from those, I’d go with A and The Influence. The iTunes Store has at current count, about 20 tunes. One of my favorite Jimmy and Doug Raney albums, Nardis, on the Steeplechase label, is on there. The one tune above all that I would pick from this album is “All God’s Children Got Rhythm, a perfect blend of bebop, swing, and delicious interplay between father and son. Also on the Nardis album is “There Will Never Be Another You”, though it may be a bit more “challenging” to a newer listener of bebop-style jazz, due to some of the dissonance and playing more “outside.” On that same album, the tune “What’s New” demonstrated Jim and Doug’s amazing interplay–especially when “trading fours” toward the end of the tune. Simply jaw-dropping.