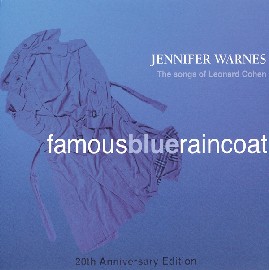 Jennifer Warnes is a singer of many talents, with a superb voice and decent range, and the ability to transcend many different genres of popular music. Most of us were introduced to her following the release of her country-inflected hit song Right Time of the Night. Other hits followed, often linked to film soundtracks, including It Goes Like it Goes from Norma Rae, Up Where We Belongfrom An Officer and a Gentleman and (I’ve Had) The Time of My Life from Dirty Dancing.

This album, released in 1987, is very different from all that. Covering a series of Leonard Cohen compositions, the feel is introspective and intelligent. That Warnes could interpret Joan of Arc as well as Up Where We Belong at their respective levels speaks well of her flexibility and ability to interpret.

This album is wonderful to listen to, but it is not easy listening. For one thing, with six 45 rpm sides, you’ll be jumping up every 10 or 12 minutes to swap sides. More importantly, Leonard Cohen is not a writer of trite, happy songs. Indeed, even his songs that are not outwardly negative speak from a melancholy mood. Famous Blue Raincoat, Joan of Arc, Coming Back to You, A Singer Must Die, Night Comes On…these songs all focus on some form of angst, of loneliness, of death and longing. So if you are seeking happy-clappy, seek it elsewhere. You won’t find it here.

What you will find in this album are superb, hurting performances of well-articulated grief…often tinged with real hope. And in this way, the album is both significant and welcome.

Warnes’s performances are solid. And what a pair of lungs: Listen to the final notes of the live version of Joan of Arc (side 6). Goodness, can that woman ever hold a note! In fact this cut, recorded live in Belgium in 1992, is my favorite track on the album, much preferred to the studio version on the album which is a duet with Cohen himself. While I’m a fan of Cohen’s songs, I’m not a fan of his voice and I feel that the duets are rather forced.

Sonically, this is a gorgeously produced LP, and was Cisco Music’s vinyl swansong. This is a real shame because Cisco had been reissuing some fantastic albums, beautifully produced and packaged. Mixing and engineering was handled by a veritable crowd of professionals. Remastering was handled by Bernie Grundman. I’ve heard some gentle sniping about the sound of the album (along the lines of “a bit hot on top”). To some degree it will depend on your system, but on mine (which is rather revealing, and which is particularly strong on reproduction of the female voice) I have no complaints. The sound is superb, aided, I imagine, by 45 rpm playback.

The pressing of these LPs is excellent. The vinyl emerged unmarred, flat and dead-quiet. Surface noise is an afterthought (Did I hear any? I can’t remember). Nothing to snipe at about the packaging of this box set either. The box is gorgeous and solid. The LPs themselves are packaged in those nifty light pink colored, heavy plastic innersleeves to which the Music Matters folks have moved for their Blue Note reissues (does this mean that the vinyl was pressed at RTI?). A 24 page full-color book accompanies the album, featuring photos, full lyrics and production and artistic credits.

This LP was always going to be in limited release (6,000 numbered copies), even before Cisco abandoned vinyl. I now see the album listed on internet merchants at prices meaningfully above the issue price. Even at $80.00 this probably wasn’t going to be an impulse purchase, but I can see the value in the package. At $100.00 plus, this album is quickly moving into the “collectable” stratosphere. If you’re dithering, I suggest that you take the plunge. Even if you never open the box, I’m willing to bet that you can sell it at a profit a year (or a month) from now. But opening it and playing it is so much more satisfying.