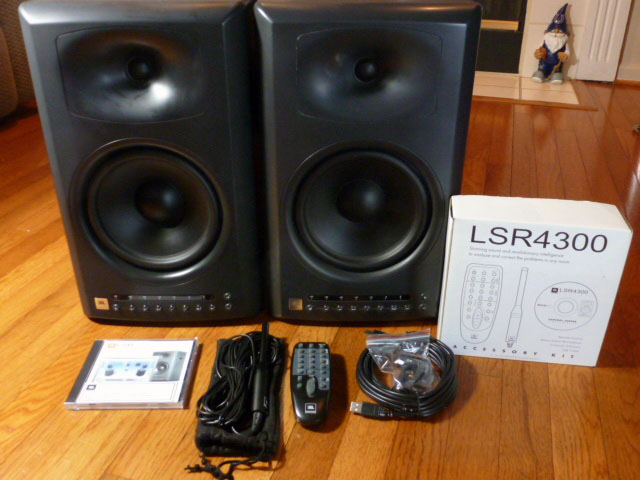 The new JBL LSR4328P powered studio monitors are designed for critical stereo and multichannel audio production applications that require exceptional spectral accuracy and high SPL capability. Since so much of today’s music production is completed in acoustically untreated rooms, the LSR4300 Series was developed to compensate for those environments. It is the first professional monitor that combines JBL’s Linear Spatial Reference technology and automated RMC (Room Mode Correction), an onboard system that automatically compensates for low frequency anomalies measured at the mix position.

JBL brings the LSR series to a broader market but keeps quality.

Note: The Bass Limit of the speaker is the sound pressure generated at 2 m. The figure of merit 10% distortion is used because operating characteristics of drivers (using DLC Design DUMAX) shows that when a speaker has reached the end of its linear operating range (BL product has fallen to 70% of the rest position value or the suspension compliance has increased by a factor of 4) the unit will still sound clean, but distortion increases exponentially with further drive.

There are three models included in the LSR4300 Series. The LSR4326P is a biamplified system with a 6-inch woofer and 1-inch dome tweeter; the LSR4328P biamplified system with an 8-inch woofer and 1-inch domed tweeter and the LSR4312SP is a 450 watt, powered 12-inch subwoofer. JBL designed the monitors for virtually any application, from simple stereo mixing to complex surround production. The LSR4300 Series systems can be configured with up to eight main speakers – in any desired mix of 6-inch and 8-inch models – and two subwoofers. The model I reviewed is the 32.5 pounds LSR 4328P. It measures 10.5 inches x 17.25 inches x 10.6 inches.

The monitors are equipped with AES/EBU digital inputs, S/PDIF digital inputs and balanced analog input with selectable +4 dBu /-10 dBV sensitivity. The biamplified design eliminates the need for external amplification and the front panel output meter displays the signal level. This meter has a variable brightness control, which is a nice feature since it can be a bit annoying after about five minutes. The monitors include low and high-frequency equalization with factory presets. These allow the response to be tailored to preference or to the acoustic conditions of the room. 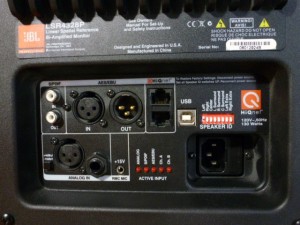 The A/D converters are 24-bit, 96kHz with 64X oversampling. The supported digital input sample rates are 96 kHz, 88.2 kHz, 48 kHz, 44.1 kHz and 32 kHz with a tolerance of ±3%. The RMC Microphone Input is a 1/8-inch tip-ring-sleeve, powered +15 volts on tip. The network connection is RJ45, and the network protocol is proprietary Harman HiQNet using RS485. Computer interface is via USB Type 1.

The speaker’s 8-inch woofer utilizes a powerful, shielded neodymium magnet that can be used in close proximity to CRT-type monitors with no interference. The transducer utilizes a copper-clad pole piece that improves high-frequency output by reducing voice coil inductance. A copper ribbon voice coil ensures high sensitivity, and a flux-shorting ring stabilizes the magnetic field in the gap, reducing distortion. A heat sink has been placed close to the magnetic gap in order to draw out heat as efficiently as possible. The cone is polymer-coated for uniformity of response over the woofer’s pass band.

The speaker’s high-frequency transducer has a treated silk dome diaphragm that produces a smooth and consistent sound. The transducer’s flat ribbon aluminum voice coil ensures low moving mass and enables it to achieve a response beyond 22 kHz. A light weight neodymium magnet structure with integral heat sinking, along with ferrofluid in the magnetic gap, enable the transducer to produce high peak output levels with minimal power compression. The magnet structure is integrally shielded, enabling the system to be used in proximity to CRT-type monitors with no interference. 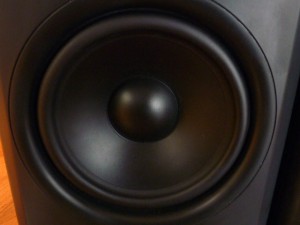 The LSR4328P incorporates two high power amplifiers that provide 150 watts of power to the low frequency transducer and 70 watts of power to the high frequency transducer. A precision digital dividing network, having high-order Linkwitz-Riley slope characteristics for smooth transition between transducers, results in exceptional imaging and lack of time smear. The circuitry also yields a tonal-artifact-free noise floor.

The LSR4300 Series utilizes the Harman HiQnet network protocol that allows centralized control of a multichannel system from any of the speaker’s front panels, from the wireless remote control, or by computer via a standard USB connection and LSR4300 Control Center Software. The network is configured using the supplied CAT-5 cable and by setting a DIP switch on each speaker. Harman HiQnet also enables synchronized RMC calibration of all speakers on the network. The Harman HiQnet network protocol enables system-wide control of level, EQ, input selection, and solo and the wireless remote control and LSR4300 Control Center Software enable control from the listening position.

The Automated RMC Room Mode Correction System compensates for standing waves that can produce a low-frequency resonance that gives a misleading impression of bass response at the listening position. The RMC automatically analyzes the frequency response of the speakers at the listening position and automatically applies a corrective filter to minimize low frequency resonance. When the calibration mic is connected and the RMC analysis is initiated, the LSR4300 RMC system applies a parametric filter at any of 73 frequencies (1/24th octave centers) between 20 Hz and 160 Hz with a variable Q from 1 (1.4 octave bandwidth) to 16 (1/11th octave bandwidth) with 3 dB to 12 dB of attenuation. During the RMC calibration process, speaker levels are trimmed in 0.25 dB increments, so all speakers in the system produce equal SPL at the mix position.

The LSR4300 accessory kit includes a wireless remote control, the LSR4300 Control Center Software, an RMC calibration microphone and clip, a USB cable, two AA batteries, and two network termination plugs. The Windows requirements for the LSR4300 Control Center Software are Windows 2000 or XP on a Pentium 3 500 MHz machine (1.0 GHz recommended). If running the software on a Macintosh, OSX 10.3 or later is required on a 466 MHz or faster machine. There must be 100 MB of hard drive space available, at least 128 MB RAM (512 MB recommended) and a USB port.

I have heard JBL’s mode correction monitors demonstrated at various trade shows. They always sounded good but those types of demonstrations don’t always translate into the real world. It’s hard to tell in five or ten minutes how much you are going to like the sound of a monitor after listening for 12 hours straight. After two weeks of use I can vouch that the JBL LSR 4328P monitors don’t disappoint. 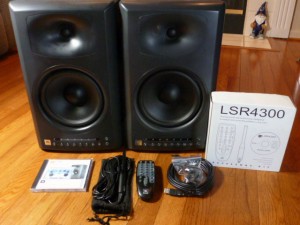 I put the monitors to use while mixing an album for Pennsylvania rocker B.E. Taylor and I found them to be extremely natural sounding with wonderful imaging and definition. They also have a neutral off-axis response that translates into greater clarity in the mix position. The monitors are loud enough to make most bands smile when they come into the control room to listen and I found that they have enough low-end information to adequately provide playback in most control rooms without the use of a sub.

I had a great experience using the Control Center Software to set the RMC System. I was amazed at the increased definition and clarity when the system was in place. I actually found myself getting quite a bit of enjoyment from running the application over and over comparing my results as I slightly adjusted the position of the monitors and the mix position. The RMC is built into the speakers so quickly setting up in a new studio doesn’t require the use of a computer. 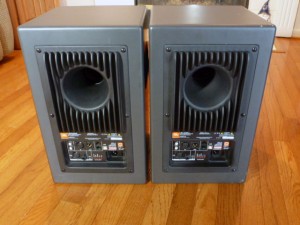 I only have one complaint with the LSR 4328P monitors. I have a Cambridge Soundworks Model 88 boom box in the corner of my control room that I use to reference my mixes. While I love the ability to use a wireless remote with the LSR monitors, every time I put it to use my boom box magically starts playing (at least the garage door doesn’t open).

Anyone looking for an exceptional sounding, full-bodied, self-powered closefield monitor that is easily and quickly adaptable to a wide variety of situations owes it to themselves to give the JBL LSR 4328Ps an audition.

Russ Long has done 5.1 DVD mixes for Allison Moorer and Mercy Me and is an in demand engineer for live sound recordings having multitracked live performances for Chris Tomlin, Lisa Loeb, Salvador, and Nichole Nordeman.

The 4328p is another terrific performing active speaker with basically flat on-axis performance and well controlled directivity. Aside from the curious blip in the top octave response on-axis falls within +/- 1.5 dB from 100 Hz to 9 kHz. The upper octave narrow notch is not present when the tweeter is measured with a closefield microphone so it is apparently a function of the front panel wave guide. The low and high frequency EQ controls work close to specification (the figures listed above refer to full cut and full boost of eight steps) and, perhaps more importantly, are remotely repeatable with the Presets and remote control. The remote functionality (mute, EQ, level control, input switching) will be useful in a variety of applications.

The RMC appears to work as specified. The one-button technique with supplied microphone and internally generated test signal makes it far easier to use than other approaches. I hunted around in my test room and found a microphone position where a 3-dB 108-209 Hz elevation centered at 145 Hz was evident and the RMC was able to compensate nearly exactly. Even better, when I repeated the measurement I got the same result. However because the speaker has limited low frequency capability (82 dB SPL @ 40 Hz) it will probably not be truly useful for room mode correction except in very small rooms and those with ceilings of 8 feet or lower. Further because it’s a cut-only parametric EQ it can’t deal with boundary cancellations.