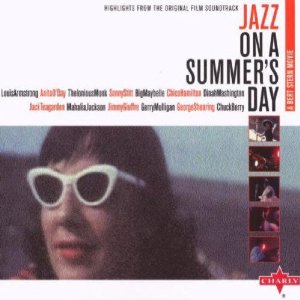 I was born too late. This is the only reasonable conclusion that I can reach. I missed the classic era of motorcars. I missed the opportunity to buy Manhattan real estate dirt cheap. And worst of all, I missed the 1950s jazz scene.
Yes, I know that some of the decade’s music is available in higher fidelity than ever before (evidence the Music Matters Blue Note reissues). And yes, I know that there is some excellent new jazz being composed and performed. But oh, to have been present at the 1958 Newport Jazz Festival! Sadly, at that point I was just a twinkle in my parents’ eyes. 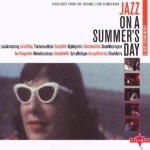 Fortunately for “youth” such as I, we have Jazz on a Summer’s Day. This documentary, filmed by the photographer Bert Stern in July 1958, was released in 1960. This film is neither a documentary, nor a “concert film”, though it contains elements of both. It is more an evocation of an era and the showcasing of some of the giants of jazz while they were still in their heyday. In this way the film is both intimate and breathtaking. Intimate because the film maker focuses, from time to time, on tiny vignettes: Children playing on a lawn. A musician playing the cello in a house. A man in a kitchen drinking beer. Breathtaking as well: Marvelous “you are there” shots of the 1958 America’s Cup challenger elimination series, which was underway at the time on the waters of Rhode Island sound. 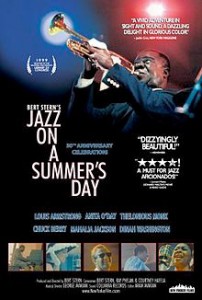 Then there is the music. And what music it is! Louis Armstrong. Monk. Dinah Washington. A stunning performance by Anita O’Day. And these are just a few of the headliners. Important to onboard is the phenomenal quality of all of the musicians playing alongside some of these marquee names. And then there’s Chuck Berry. Chuck Berry? Indeed. One of the characteristics of the Newport Jazz Festival has been its propensity to invite popular music names into the tent. I don’t know if 1958 was the first time this happened (the festival started in 1956), but eventually it was the reason for which the festival left Newport temporarily in the early seventies, as acts such as Led Zeppelin and the Allman Brothers Band (I’m not kidding) led to riots.
It would be wrong, however, to consider the music separately from Stern’s greater oeuvre. If all you want to do is listen to the music, perhaps best to buy the CD, which features some of the outstanding tracks from the movie: Dinah Washington singing “All of Me”, Anita O’Day’s takes on “Sweet Georgia Brown” and “Tea for Two”, and one of my favorites, The Chico Hamilton Quintet’s “Blue Sands”. Sound quality is only OK…after all, this was a live, outdoor performance recorded over 50 years ago, and for film rather than high fidelity reproduction. Nonetheless, the CD’s sound quality is more than adequate for transmitting these standout performances.

I come back to my original contention: The real point of this film is to watch it. The music infuses the film. The visuals render the music three-dimensional. The film is an impressionistic work of art, and is not to be missed. I watched the film at a screening, thought “Darling, where have you been my whole life?, then immediately bought several copies of the DVD for me and for a select group of good friends. Yes folks, it’s that good. Even if you are not a huge fan of jazz, you owe it to yourself to experience Jazz on a Summer’s Day.