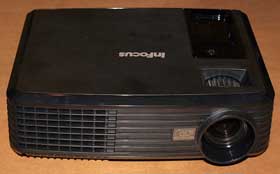 The Infocus X9 Home Theater Projector is specially designed for in family rooms, bonus rooms, and other less than optimal locations. The image projected is very bright—much brighter than most of the comparable competition can produce. Hard core HT enthusiasts may be disappointed with the black levels (although they are not bad, just not what a home theater elitist might like to see),  and a more advance HT buff might want to bit more in the way of image controls. But for someone who just wants a bright, crisp movie-quality visual at home for not a ton of money, the Infocus X9 will not disappoint.

The X9 is small and lightweight, and can be easily mounted to the ceiling. It can also double as an entry level business projector. The only big negative with the X9 is that the lack of grayscale calibration controls (it has no separate R, G, B colors) may turn off enthusiasts who really need to “tweak” the image on each separate application.  The InFocus X9 retails for just under $1100.