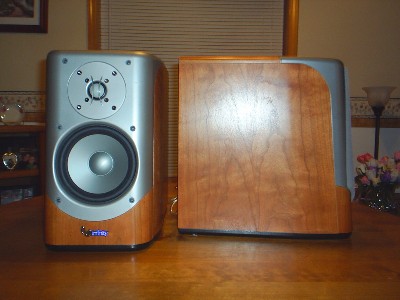 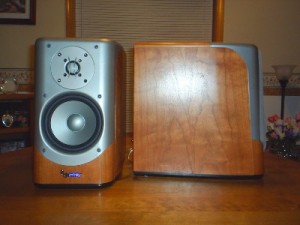 Infinity speakers have a love/hate relationship with audio fans. The IRS and Intermezzo series have had a tremendous amount of critical success over the years. The original Kappa’s have a loyal and dedicated fan base. This is due to the higher quality of engineering and an honest desire to improve upon previous performance standards.

A few years back Infinity decided to reintroduce the Kappa line with a whole new lineage. The speakers would be born and bred of Danish design with simple, rounded lines meshed with a pewter-colored plastic front panel. The look is different, yet clean and pleasant to most eyes. The form actually makes the speakers look bigger than they actually are. This is from the rounded, almost bullet-like shape of the box. The build quality is exceptional and the real cherry veneer on the models I reviewed were impeccable.

Infinity says the following about their drivers:

“Working collaboration with metallurgy specialists, the resourceful Infinity transducers engineers identified a special combination of materials that exhibit a remarkably useful set of mechanical properties. Infinity’s new Ceramic Metal Matrix Diaphragms are much stiffer than standard metal diaphragms, moving the natural resonances upwards in frequency. At the same time, CMMD cones have more damping than metal cones, making this an excellent cone material for all transducers: woofers, midranges and tweeters.”

What all this means is that an aluminum center has a specialized ceramic/metal covering creating a driver the “dramatically” reduces distortion.

The pair I reviewed had only a few hours of activity on them, so a thorough break-in period was needed. A combination of music and white noise was played thru them constantly for the better part of two weeks. The rather stiff cones finally did loosen up somewhat, but not to level I’ve experienced with other speakers. Even at moderate to higher volumes the driver cone barely moved. This was my first indication that either the Kappa 200’s craved power beyond the listed 100 wpc maximum, or the CMMD cone design was a very stiff composite.

True to Infinity’s word, the CMMD cones do reduce distortion. The music coming forth was clean. What distortion I did hear came from the sources I was using, not the speakers themselves. True to it’s old-world birth the Kappa 200’s do not sound like a typical Infinity, or American speaker for that matter. The sound is very European, laid back with emphasis on neutrality. With certain music this can be quite pleasant, such as light symphonies and the infamous office music.

The Kappa 200’s were setup in my living room (approximately 18’ x 12’). The speakers were placed on 24 inch metal stands approximately twenty four inches from both the side and back walls after much shuffling. Connection was the poor man’s bi-wiring. It should be noted that the Kappa’s binding posts are arranged in a four across pattern instead the standard two-over-two. Both 14 gauge and heavy original Monster cable were used as interconnects. No appreciable difference was heard, unlike the Linn Keilidhs reviewing in the January.

To be fair, I tried the Kappa 200’s with both my Harman Kardon AVR 75 receiver and the Adcom GFA 535. My immediate impression was clouded by a rainstorm that masked the musicality of the speakers. I tried again the next day, the sound only improved slightly. It seemed as though a heavy curtain was placed between the speakers and my chair. The HK just didn’t have the power to create any life whatsoever. Even with its high current capability, the performance just didn’t exist. Nothing more need be written. 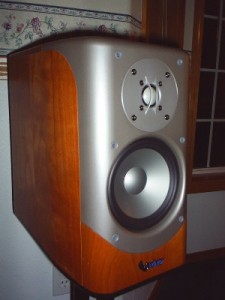 The Adcom, true to its design, did push the Kappa’s but not into being forward, but a soundstage was created. It went out just a few feet then up from the speaker placement and backwards rather than toward the listener. This “come to me” sound may be easy to listen to, but left me emotionally unsatisfied. However, opposite of Infinity’s heritage, rock music lacked energy. The Who’s masterpiece “Quadrophenia” lacks the emotion that makes the recording so powerful. I never felt drawn into the music. One could try to say that my “American ear” wasn’t prepared for the nuances of European sound, but that isn’t the case. I spent fifteen wonderful years savoring the sound of my trusted Celestion SL6si’s.

This is not to say the music produced by the Kappa 200’s was bad. Acoustic guitars had a smooth quality, with a slight warmness. Piano music came across with a natural decay of key strikes. What was fascinating was how the foot petal was placed low and to the left of center, yet the vocals placed themselves actually back from the speakers a good foot and a half. This reverse soundstage beckoned me to lean forward in my chair and walk between the speakers. The result was both confusing and pleasant in that there were no “dead zones”. If this were a workout room with a number of machines the Kappa’s might have worked quite well.

“The Kappa 200’s performance for me may explain why this model is such a rare find in the US and Canada. It’s characteristics I bet left many potential customers confused. Longtime Infinity Kappa fans must have felt puzzled, if not abandoned by the drastic change in sound. It is so very, very different. If you are interested in this series of speakers (the Kappa’s also come in a 400 and 600 models) make sure to audition them in your own home. I didn’t before buying. Now they inhabit the list of equipment I used to own.