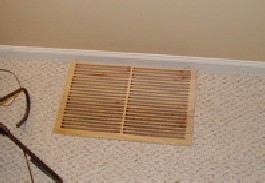 “Honey, I am going to cut a hole in the family room floor” …I said to my wife after deciding to design, build, and install an Infinite Baffle (IB) subwoofer system for my vintage audio system.

I first started toying with the idea of adding a subwoofer to my family room system after the restoration of my Sansui AU-717 integrated amplifier, Sansui TU-717 tuner, and JBL L96 10” three-way speakers. I really wanted the system to produce the full 20-20,000 Hz audio spectrum or better, and the L96’s would only get me down to 30 Hz or so.

My quest for 20Hz-or-better began by looking at “on-floor” subwoofers before I discovered the IB concept. I researched Velodyne, DIY kits, and other brands and listened to alot of units in stores. A local high-end store near my home offers a generous demo program so I brought home a used Velodyne HGS-12 to test. Once I placed the unit in the room I realized it was gigantic! My wife laughed as she saw me wrestling it into various positions and asked “what in the world are you doing now?”. The sound was OK but it was not nearly as uni-directional as many manufacturers claim subwoofers to be and it sounded like it bottomed-out a couple of times, which alarmed me. So not coming close to meeting the Wife Acceptance Factor (WAF) and the lackluster audio, in my application at least, meant it had to go back to the store. I came across an “under-floor” Boston Acoustics model on their web site that intrigued me because it fit between floor joists and vented its output into the room through a HVAC-type vent, if you will. “Slick-looking concept”, I thought, but its price point and mandatory amplifier made me cross it off the list. 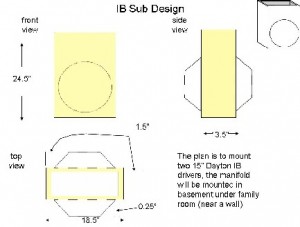 As a regular member of Audiokarma.org I posted my query for input from the experts there and sure enough someone posted a link to the web site called The Cult of the Infinitely Baffled. I was amused and amazed at the lengths some of these guys (I believe they are all guys) go to in their quest for room shaking bass response. I also leaned that IB subs are very musical, which was my main motivation here with movies being secondary, whereas different off-the–shelf subs vary greatly in their capacity to cleanly and accurately reproduce musical bass.

After I received a cautiously positive response from my wife, which I immediately interpreted as an endorsement, I snapped into action. Many of the projects in “The Cult”’s website use plate amps but I wanted to keep the system mostly vintage and power the sub using a vintage amp. This involved getting a decent amp and some kind of crossover to filter and adjust the level of the input. I got lucky and snagged a near-mint Sansui BA-F1 amp on eBay and replaced all the electrolytic caps in it to freshen it up. I researched a product from Outlaw Audio called the ICBM-1 bass manager which I decided would work for the pre-stage into the BA-F1. I also settled on the reasonably affordable Dayton 15” IB subs made specifically for this application.

Next was the design and construction of the cabinet. Since all of these design are customdesigned due to the fact that most applications are unique, I had to do a lot of walking around my basement looking for acceptable locations and taking a lot of measurements. I remeasured the locations both upstairs and downstairs, drew-up the plans for the cabinet and audio, and headed to Home Depot for a couple sheets of oriented strand board and mediumdensity fiberboard. 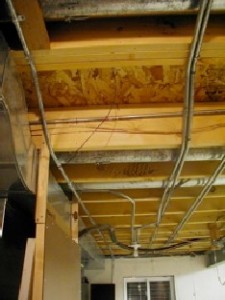 All the materials for the cabinet are ¾” and heavy-duty. I cut the pieces on my table saw and assembled most of the cabinet in an afternoon. The cabinet is constructed of oriented strand board covered with the MDF…so the walls are 1 ½” thick! The next day I had to measure, mark, and cut the holes for the cabinet which took quite a while because I did that with a jig saw…well actually two jig saws as I burned out the motor of the first one. 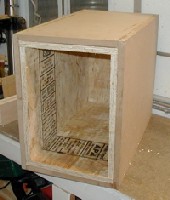 Next came the fun part, at least for my kids anyway, which was cutting the hole on the floor! Before I could do this though, I had to re-route one electrical line supplying a light fixture.

Once this was completed I again measured multiple times and set forth with the Sawzall. The cut was perfect. Mounting the cabinet was a bit more challenging because the thing weighed about 75 pounds without the subwoofers mounted! I had to use a small floor jack propped on top of a ladder to inch the cabinet into place against the sub floor of the family room. Once this was accomplished I used various “L” brackets and a boss made of two-by-fours to secure it to the floor between the joist space. 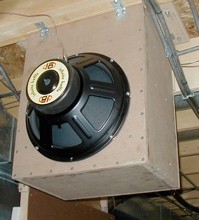 At this point I was about four days into the project and could begin to see light at the end of the tunnel. I screwed on the two 15” drivers, ran all the wiring and connected it to the main system. I had to construct the grille, that covers the opening in the floor, from a piece of solid ¾” solid oak plank. I used my router to miter slots so that it looked like a slightly oversized vent. After a coat of stain and poly urethane it looked like it was meant to be there…right next to my favorite chair. 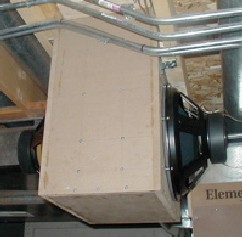 Now it was “GO” time and the results were excellent! After hearing the results of this project, I don’t know how I lived without it until now. This thing moves some serious air! Even at very low volume you can feel the punch of bass. The Outlaw ICBM which is really intended for seven channel systems, worked exactly as I had intended it to. You can dial-in the desired level with a lot of flexibility. It has both crossover frequency capability and signal level controls. The Sansui BA-F1 has plenty of power, at 110 1970 RMS Sansui watts per channel, to drive the below 40 Hz frequencies. Running movies, such as War of the Worlds, through the system is simply amazing. The scene when the clouds are gathering and the lightning strikes are snapping literally shakes the entire floor. IB subs, though are extremely musical and well engineered recording sound fabulous.