At this week’s IFA show in Berlin, Philips officials provided an update on the SACD format and its progress in the European market. In addition, they revealed plans for the development of Car SACD players by a partnership between Philips and Harman International as well as updated SACD sales figures for the Hybrid Multichannel SACD edition of Pink Floyd’s classic album The Dark Side of the Moon.

More SACD Titles and Dark Side of the Moon SACD Sales
During the IFA trade show in Berlin, Philips officials hosted an SACD Industry Update for the European market. They noted that this year has seen more SACD releases in Europe from both internationally known artists as well as recording stars in the European market. This has included the European releases of the catalogs of both the Police and Peter Gabriel on Hybrid SACD as well as local artists such as French group Era and Dutch group Blof.

Blof recently decided to release its new album only as a Hybrid Super Audio CD. They were quoted as saying

«Listen to our album on a Super Audio CD player and you’re right there in the studio with us. The music is stunningly clear – it grabs you by the throat and won’t let you go.”

The result of this increased SACD release activity is that there are now over 1,300 Super Audio CD titles available worldwide from more than 100 record companies that are now producing SACD discs. According to Philips, in the European market, SACDs are being issued by 4 of the record industry’s 5 largest firms (Universal Music, Sony Music Entertainment, EMI/Virgin and BMG).

In the European market, there are now 867 SACD titles available. Of those, Philips says that more than 70 percent of these are Hybrid SACD discs that are playable on SACD, CD and SACD compatible DVD Video players. They also note that most of the new SACD titles coming out in 2003 include Surround Sound SACD and Stereo SACD mixes. The result of this increased Surround Sound activity is that around 50 percent of all SACDs now feature multichannel mixes.

“With CD sales showing a worrying downwards trend across Europe, Super Audio CD provides a welcome boost for our future business. It is still relatively early days for the format, but its outstanding multi-channel capabilities linked with the CD compatibility of the hybrid disc creates a compelling customer proposition that appeals to all kinds of music lovers from classical to pop and rock.”

Included in the upcoming releases are Sting’s new Sacred Love album which is due in Europe on SACD on September 22nd, a week before it’s release in the U.S. Universal Music International plans to make Sacred Love available in Europe initially only on Hybrid SACD with a conventional CD release to follow later.

Key albums planned for SACD include Electric Warrior by T. Rex and six titles from Oscar Peterson’s Exclusively For My Friends series. Turning to European artists, Universal will release SACDs by Moya Brennan, Ronan Keating, Texas and Sweden’s rock group The Cardigans. Some of the key SACDs planned for European market release include:

To promote Universal Music International’s SACD plans, Sony Europe, Philips and Universal are planning a joint marketing campaign to provide awareness of these releases. The campaign will feature «personal statements» from major artists with Universal SACD releases such as Sting encouraging consumers to «Send Your Sound Into the Future».

Philips and Harman International Work on Car SACD Player Systems
The big news at IFA 2003 is that Philips and Harman International are working on a joint development project to bring Surround Sound SACD reproduction to the car entertainment market. In the project, Philips will provide its SACD expertise as well as its experience in developing key SACD «modules and components» while Harman will use their system integration expertise to «optimize SACD reproduction in the vehicle environment». The end product of the project will be «a range of high performance factory installed Infotainment Systems which integrate SACD-Technology to multiple vehicle manufacturers, worldwide.»

“This development brings the new Super Audio sonic experience in the car. The automotive market is now ready to experience the next generation in sound quality, and we believe that SACD, with its surround sound and superior audio technology, is the most logical solution to that need. An additional benefit of SACD for the in car market is its familiar, CD-like operation, with no need for exceptional investments and no potentially distracting user interfaces”.

«As the automotive industries leading provider of high performance, brand-name OEM sound systems, we continue to develop and introduce the best available technology to maximize in car musical enjoyment. Because of its high-fidelity, and discreet multi-channel source format as well as its compatibility with today’s CD market and its easy, intuitive operation, Super Audio CD is ideally matched to the demands of the in car environment”.

SACD Hardware Sales in Europe
Turning to SACD players and systems, Philips officials report that the European «installed base» of SACD hardware has doubled from 1 Million to 2 Million players over the last 8 months. A key to this growth is the availability of «more than 65 Super Audio CD models from 28 manufacturers». Additional audio firms are expected to reveal plans to introduce SACD players to the market before years end.

Sony Europe officials reported that the «retail take up of Super Audio CD currently stands at around 90 per cent» in Europe. They also noted that in the European market «during a prescribed period, sales of Super Audio CD players exceeded DVD-Audio by a factor of four to one».

As in the United States market, the best selling group of SACD products are the so-called Home Theater In A Box Systems that offer both SACD and DVD Video playback along with amplification and speakers in a single package. Sony Europe has now added Super Audio CD playback into all of its «DAV Series» Home Theater In A Box systems.

Jos Bruins of Philips added that

“For the last 20 years, CD has served the market tremendously well and whatever replaces it must offer the consumer a considerably enhanced proposition. It must respect consumers’ investment in CD music and offer significant added value in terms of multi-channel home entertainment. As CD’s developers, Philips and Sony recognize this. Super Audio CD has taken many years to develop and now we are beginning to see the fruit of our labors in terms of a rapidly evolving business in Europe. We believe that Super Audio CD will reinvigorate the entire music industry in Europe. Not just the consumer electronics sector – it offers the same potential to the music recording industry and retail sector as well.” 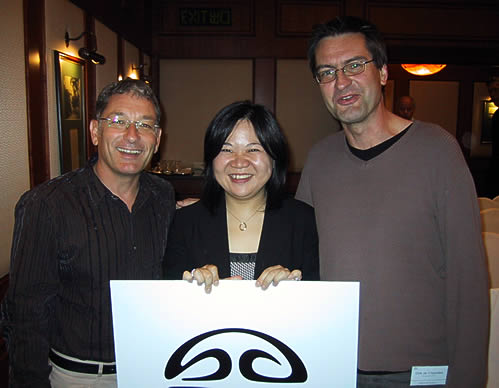