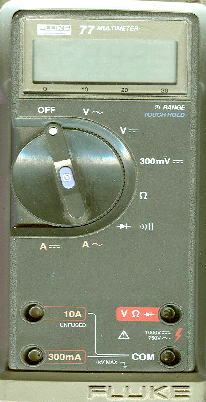 Enough To Get By.

You need to know how to use a VOM so that you can do simple chores like setting the DC offset at the speaker outputs of your amp, checking/setting the bias current on the pc board of your amp (somewhat scary, but otherwise simple), and checking to see if that solder connection you just made is really a connection. We’ll use a Fluke 77 VOM for illustrative purposes; there are a lot of Flukes around that look like this one, and a lot more VOMs that work like it. Plus, it’s easy to see the controls, and this is the VOM I have. This VOM is auto-ranging. If yours isn’t, it has more positions around the selector knob; no big deal, you’re just more apt to see the out-of-range message in the LCD window. The sine wave symbol after the V(olts) and the A(mps) indicates AC positions. The horseshoe symbol represents Ohms. Some VOMs have a selector knob for choosing ranges, and another one to read volts, milliamps, or Ohms. I don’t know if all VOMs make you move the non-common lead to a different jack to check current rather than volts/Ohms; this one does. I think this way is safer. The Fluke also has the capability to measure current up to 10 amps when connected in series with the circuit. I can’t think of a use you will have for this in DIY audio work, and it’s possible to ‘smoke’ the meter using it that way, because it isn’t fuse protected there. 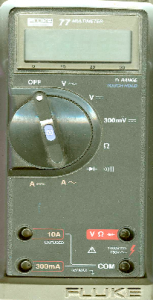 Lets examine how to check continuity/ resistance. If you have a populated pc board you can get at, good. Otherwise we can make do with your body. No harm should come of it. The first thing you have to do before checking resistance is to make sure that the device has NO POWER going to it. You can’t check resistance in a powered circuit, but you can blow the meter’s fuse, which is annoying, or zap yourself, which is also at least annoying. Unplug the device; that’s safer than relying on the position of its power switch. Plug the black lead into the COM(mon) jack on the VOM, and the red lead into the volt/ ohm jack. It doesn’t really make a difference now, but when you’re checking DC volts or milliamps it does, so you may as well get used to it. Move the selector knob from the OFF to the Ohms position. When the meter finishes its self-test and battery check, the window will show 0.L and the bar graph will extend all the way to the right. M (Ohms) will appear on the right side of the window. That’s lack of continuity. Now take a probe in each hand and squeeze it with your fingers. You’ll see a reading, probably some decimal part of a megohm. Touch the two probes together and the widow will change to show some small value, probably 1 or 2 tenths of an Ohm. If you have that populated, NOT POWERED pc board, you can play with checking resistances across various sub-circuits. It will give you practice placing the probes where you want them to be; that becomes important when you are checking voltage in a poweredup circuit.

It’s easy to find a voltage source you can use a wall outlet. Set the VOM’s selector knob to V-AC (sine wave symbol); plug the red lead into the volts/ohms jack. Insert a probe into each, ah, prong-hole of the wall outlet and the meter will display the voltage that’s there. What we really want to see though is DC volts and milli-amps. I thought about taking you directly to setting DC-offset and bias current in an amplifier here, but that makes me nervous. You really ought to get more practice with those probes; sticking one in the wrong place could mess up your amp. So, how about using a wall-wart? That’s what some folks call those little plastic-cased power supplies you plug directly into a wall outlet. You want one that outputs DC and is rated at not more than 300 mA. We need to cut the cord, but when you’re done it can be reattached and will work good-as-new.

OK. With the wall-wart NOT plugged into the wall, cut the output cable 3 or 4 inches from it’s free end. Strip an inch of outer covering from the end of each piece; since this is a DC power supply, one of the wires revealed ought to be insulated in red. Strip a half-inch of insulation from each wire. Bend the wires that are connected to the wall-wart away from each other (to avoid shorting them together in the next step). Now we are ready to read DC voltage. Set your VOM to Volts DC. Place a wooden bench (or whatever is non-conductive and handy) near the wall outlet; rest the cable on it, and plug in the wall-wart. Touch the black lead of your VOM to the black wire and the red lead to the red wire. You should see a reading in volts. Now swap the leads; you should see the same reading, except that now there is a minus sign before it. You probably noticed that it isn’t all that easy to get and hold a good connection between probe and wire. Remember that, and you won’t accept faulty readings later. To read current, we need to connect one of the wires back to the plug, leaving the other wire disconnected. Unplug the wall-wart first. It doesn’t matter which color, just be sure it’s red to red or black to black. Twist the wires together tightly and wrap electrical tape around it. Bend the two unconnected wires away from each other. Now plug in the unit the wall-wart is meant to supply, and the wall-wart back into the wall. If the unit has an on-switch, turn it on. Set the selector knob on the VOM to Amps DC, and move the red lead to the milli-amps jack. Touch the probes to the wire ends. If you have a good connection you will see a reading in milli-amps. Note that what you are doing here is connecting the VOM is series with the load. When you’re done with this experiment, connect those two wires together, and wrap some electrical tape around the pair and the outside covering; good as new, right? Next time (if there is one), I’ll go over setting DC-offset and bias current.