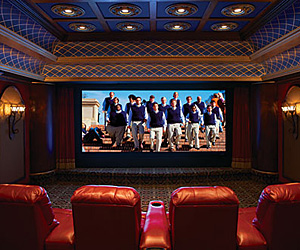 Letting its owners enjoy brilliant 1080p resolution images, Houston Home Theater gives them a serious sound control. Designed in such a way that its front aerial speakers and subwoofers remain hidden behind the transparent micro perforated screen, this home theater system comes is equipped with a set of six Triad speakers and two rear columns for surround sound.

This over-the-top Houston Theater has it all. “I wanted to build a space in my home that was almost a fantasy land,” says the proud owner. “You can step into this, and suddenly you feel you are not in the home but in an old opera house.” “This space was going to be located directly over the master bedroom suite, says Dennis Erskine, CEO of Design Cinema Privee. “Thus, sound isolation became a critical component of our design.”

Its12-foot wide Stewart Filmscreen CineCurve Screen and Runco top-of-the-line 3-chip 1080p DLP projector fitted with an anamorphic lens allows its owners to see the superior CinemaScope pictures in perfect 2.35:1 aspect ratios. Ever since the Houston’s have got this theater they are getting more and more friend visits.