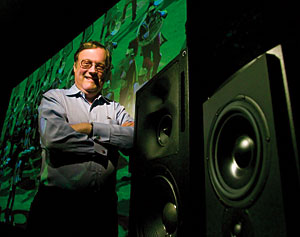 In his Surround 2003 seminar, Tom Holman of TMH Corporation gave an interesting, anecdote-laden account of the history of surround sound recording, a “drama in five acts, we hope with a happy ending.” Holman went back to the roots of stereo recording to find the events that led to the first recordings in surround sound. As Holman pointed out, it all goes back to Bell Labs’ initial experiments with stereo recording in the early 1930’s. Their initial brainstorming proposed that a recording system be developed with an “infinite” number of microphones deployed in front of the musicians, with just as many playback speakers as there were original microphones, deployed in an identical curtain in front of the playback listener. They soon discovered that phantom imaging adequately cut down the “infinite” number of channels originally posited, and set up a live test transmission over the then unheard-of bandwidth of 15kHz telephone lines in three-channel stereo from the Philadelphia Orchestra conducted by Leopold Stokowski at the Academy of Music in Philadelphia, to a listening room that Bell Labs set up in a theater in Washington, D.C. This deployment of the three channels was identical to the front array of a modern surround system, with right, left, and center channels. Although this relay was successful, an efficient playback system for three-channel recordings eluded the Bell engineers at the time, and the concept was shelved.

A few years later, Stokowski had a chance meeting with Walt Disney in a restaurant in Hollywood, where they hatched the idea of a motion picture cartoon that featured classical music, a project that was to become ‘Fantasia’. Stokowski was intrigued, and insisted that Disney’s engineers contact Bell Labs to find a way to make use of their experimental stereophonic recording system in the film. When Disney’s engineers confirmed that this was possible, Disney challenged them with an additional inspiration which hit him when thinking about the ‘Flight of the Bumblebee’ segment of the film: Wouldn’t it be great to have the musical sound of the bumblebee flying all around the audience instead of just in front of them? According to Holman,

“Insofar as we know, Walt Disney is the inventor of surround sound.”

Many techniques and pieces of equipment were invented for the ‘Fantasia’ project, including overdubbing. The technique and end result were dubbed “Fantasound.” Disney’s original concept was also remarkably close to the current surround setup: right front, center front, left front, right rear, and left rear, lacking only a modern subwoofer channel. The recordings on the film soundtrack, though, where only three channel, with the rear channels being “steered in” electronically where desired, such as in the chorus entry in the ‘Ave Maria’ section of the film. The requirements of outfitting theaters to use Fantasound were, not surprisingly, a large drawback. Disney sent a “road show” out with all the equipment to demonstrate Fantasound in New York, Los Angeles, and a few other places, but it didn’t receive wide enough exposure to catch on. As World War II began, the equipment was retired until Josef Stalin’s government in the Soviet Union expressed an interest in using it for soviet films, which he hoped to elevate as the new art of the people, replacing the traditional central role of religion in Russian society. As the U.S.S.R. and the U.S. were allies during the war, an agreement was made and the equipment was loaded onto a ship and sent to Europe – but somewhere in the North Atlantic, the ship met a German U-boat which torpedoed it, sending Fantasound down to the bottom of the ocean, where it presumably still rests today.

“Thus the end of the first act – our hero dies an ignoble death,”

After the war, there was an explosion of new technologies, including television. To combat the huge dip in movie attendance, around 1950, Twentieth Century Fox resurrected the concept of “Cinemascope” for wide screen presentation of films. They included stereophonic sound as part of the package, here in a four-channel deployment (left, center, right, and one mono surround channel). Other cinematic surround modes were also tried, but the expense of prints, competing formats, and the inability of the new technologies to recapture the television audience led to the demise of usage of surround sound in film, thus bringing the second act to a close.

The third act, Holman continued, arose from the hi-fi hobbyist movement, which flowered in the Fifties and peaked in the Seventies. The taste for higher quality sound led to frustration with the phantom-stereo imaging of two-channel sound. The first problem was the precedence effect, which is heard if you move around the room between a pair of stereo speakers – the apparent image moves with you, very unlike the way a genuine sound continues to radiate from where it was actually made by the musical instrument or singer. The other problem is that this creates a frequency response problem, with certain frequencies being cancelled out, causing an unbalancing ripple effect throughout the audible spectrum known as “comb filtering”. As Holman pointed out, the rush into Quadraphonic sound in the 1970’s was not sufficiently thought out in terms of psychoacoustics, let alone in terms of playback technology. It was an attempt to create surround sound without fixing the basic problems of front stereo imaging. Playback problems and competing formats further guaranteed the failure of Quadraphonic sound.

Not surprisingly, Holman cited Dolby’s pioneering of theatrical applications of surround sound technology as Act Four of the surround sound story, with the esthetic use of the technology in the legendary film ‘Stars Wars’ as the point where surround sound finally caught everyone’s attention. He pointed out how small print in the original contract guaranteed that all prints of the film would include Dolby Surround sound, a fact that helped encourage theaters to update their sound systems, as this was not always the case with prints in the past. He also pointed out how the right and left side channels of their six-channel array were used for low-channel effects, thus introducing an early equivalent of today’s “.1” subwoofer channel. Holman amusingly pointed out that the “.1” of “5.1 multichannel” is more a marketing concept than a reality. Considering the percentage of bandwidth actually needed for low channel effects, he said that it could more accurately be described as “5.005 surround sound”.

We are now in act five of the multichannel drama, where it is hoped that surround sound will live happily ever after – or move on to future sequels. Holman pointed out that the current standard is a compromise based on the idea of achieving surround-sound with as few channels as possible, due to the size limitations of film. Many have said that additional rear and side channels would improve imaging and panning, but Holman admitted that detailed charts of extensive audio testing by Swedish Radio indicate the rapid drop-off in directional and frequency perception in human hearing to the side and rear. The human ears are forward-focused, and are not especially perceptive to discrete image focusing behind the head. The point impressed is that the main leap in multichannel recording has been made. It can be altered or tweaked in the future for improvements, but the largest leap in perception for the home listener is from two-channel stereo, to the current 5.1 surround sound, but Holman stopped short of embracing the current technology as a long-term plateau.

Holman commented that researchers have determined that it would take a minimum of “tens of thousands” of recorded channels to accurately reproduce a listening environment. Holman instead suggests a maximum increase to 10.2 channels – “for now.” This array would add left-front-wide and right-front-wide channels at 60 degrees from the listener, a center rear channel, and left and right front high channels to break the vertical plane. The additional sub channel would be to create a greater sense of headroom on the low frequency effects, making it possible, for instance, to very accurately recreate the sense of space and pressure one feels when suddenly entering an otherwise silent cathedral. In closing, Holman noted that there is no limit on how much surround sound can be improved by the addition of further channels, but he pointed out,

“the more we add, the more confused people will get, and they already think we’re a bit crazy!”