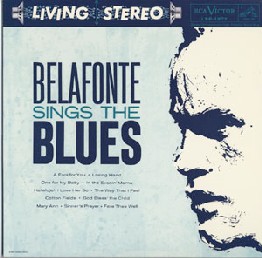 OK, first things first: This isn’t really a blues album. At least, not in the sense of a Muddy Waters, or even an Eric Clapton blues interpretation. It’s a mix of some blues songs and some old standards, nicely accompanied and featuring the super-smooth voice of Harry Belafonte.

Back in 1958 when this LP was released by RCA (then available in both mono and Living Stereo—it would prove to be Belafonte’s first stereo release), Belafonte was riding high on his calypso wave. To some degree, the typecasting of the singer as a singer of songs such as the “Banana Boat Song” and “Day-O” must have contributed to his desire to release something a bit more down tempo and “serious”. I’ve read, but can’t confirm, that Belafonte Sings the Blues was the singer’s favorite album…perhaps precisely because it was a break from the usual fare.

This LP is a Classic Records reissue, which had gone out of print some time ago. The company has recently repressed the album, and it merits a listen. While not pure blues by any stretch of the imagination, it is probably what middle America was willing to accept in 1958: Smooth, middle-of-the-road music, performed with sensitive and skillful arrangements by a known singer with a really outstanding voice.

I don’t mean—at all—to damn with faint praise: This album sung by Perry Como would have been artistically disastrous, though probably not financially disastrous. As far as he could take it, Belafonte interpreted “the blues” in a style that was not too far off center, but at the same time not plain-vanilla. The performance exudes artistic merit as well as a kind of bravery: I can imagine the pressure to continue releasing songs in the vein of Calypso and Jump Up Calypso, and I’m happy that Belafonte went in a different direction.

This LP sounds phenomenal, a credit to the original recording engineer, RCA’s foresightedness, and a super mastering by Classic Records. While the mix is relatively hard right and left with some center, the realism of the recording is phenomenal. Some instrument entries made me jump; they were that realistic.

The pressing that I received was flawless in every way, as was the jacket art, as I have come to expect from this label.

For those of you who were weaned on Belafonte’s calypso sound, or who—more recently—have acquired either the original RCA issue or the Classic Records reissue of Belafonte at Carnegie Hall, Belafonte Sings the Blues is a worth-while purchase. The performances are sublime, the treatment is tuneful and respectful, and the physical medium is of the highest quality.