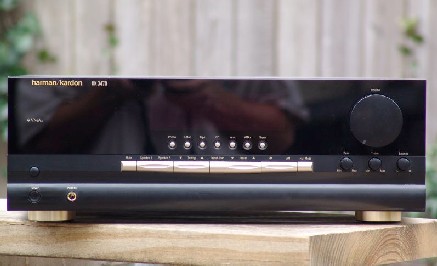 Every once in awhile, it’s good therapy to cleanse the audiophile spirit by suspending routine high end explorations and pay homage to affordable components of yore that truly got the fundamentals of music reproduction right. One of the first major stepping stones in my foray into audio was the Harman Kardon 3470 stereo receiver. Found on the shelves of Circuit City, this product carried little street cred and nearly zero hi-fi appeal. After all, what self-respecting audiophile would dare entertain the idea of bringing home a receiver so accessible that even the next door neighbor can stop by Circuit City and pick one up before grabbing some take-out? How plebian!

While the thought of owning such common electronics is enough to repulse any high brow aficionado, it would be a mistake to assume that every mass-produced component is inherently incapable of producing solid stereo performance. This holds especially true when you enter Harman Kardon into the equation, a company that retains one of the longest standing histories in American Hi-Fi. Famous for pioneering the world’s first stereo receiver back in 1958, Harman Kardon has maintained a long tradition of offering affordable, sturdy, and reliable audio components. Even in today’s multi-channel receiver-driven market, Harman Kardon continues to offer a look and sound that are arguably a level above its direct competitors.

Dishing out a respectable 100wpc, the model 3470 hit the scene as the most powerful receiver released by Harman Kardon. The foundation of its high current bandwidth rests on the hefty iron core transformer. At the time, there was no other accessible stereo in its respective market that could boast of similar power and high current capacity.

Power was not the only priority invested into the 3470. The Harman design team also focused on offering a receiver would be both easy to use and flexible enough to integrate into the modern lifestyle. Its simple interface packed a lot of features: five inputs, a subwoofer output, a pre-out, a main-in, a phono input, a tape monitor loop, along with a wideband AM/FM stereo tuner, programmable remote control, 1/4th headphone out, two separate speaker terminal outputs for A/B selection, and tone controls. The 3470 also comes with Vmax, a proprietary circuit that was designed to create ambient effects that mimic a concert hall or theater when activated.

The whole design is anchored with sleek, modern, cosmetic flair. While most other competing products stocked on neighboring shelves retain a curb appeal that is pedestrian at best, Harman Kardon tugs at our inner feng shui by offering nice contrasting colors with just the right amount of ambient light against a reflective dark glass façade. It is a look that un-bashfully screams; “I am a luxury item.”

I purchased the 3470 just prior to coming down with the audiophile disease. At the time, all I was looking for was an affordable, good-sounding all-in-one solution to replace my set of bulky Carver and AMC separates. I knew this move was an ambitious stretch. My audio buddies assured me that going back to a receiver would be a step down in the audio food chain. I decided to soldier on anyway. The combination of curiosity, a generous trial period, and a bit of hope was too much to resist. Cutting right to the chase, the HK won me over and the aforementioned separates were sent packing.

The 3470 has been active duty ever since then, often serving as a secondary amplifier for the PC rig or playing the occasional critical back-up role whenever the main system is in transition. No matter the situation, the HK has given me solid and reliable performance. Looking back, I can’t think of any other single piece of electronics I’ve owned that has truly given me my money’s worth in the same way the HK has.

What the Harman Kardon 3470 does so right is the very thing a number of many high-priced esoteric pieces completely miss out on, maintaining the integrity of musical reproduction. No matter what the music, this receiver never fails to keep it engaging and interesting. What it lacks in refinement, linearity and ultra resolution is made up for by surprisingly good pace, rhythm, and timing. 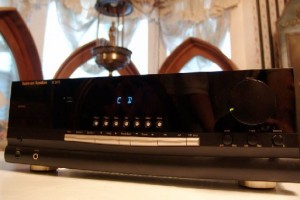 To make it clear, this is not a product aimed for top to bottom neutrality. Instead, it is a product of distinction, coloring the sonic landscape with mid-range bloom. No matter what the music or recording, you can expect the 3470 to dote upon the signal a bit of spice and warmth. It ain’t for the linear crowd.

Yet, when you get right down to it, the 3470 is capable of more than its modest pedigree would suggest. It’s nicely detailed, never missing the fundamental details of a recording. Sure, it may take you a bit more effort to decipher the faint sounds of footsteps and laughter in Pink Floyd’s “Dark Side of the Moon” – but they’ll still be there. The 3470 is also capable of rendering a good soundstage. While it may not match the sharp precision of pricier integrated amplifiers, it nonetheless creates a respectably wide, deep, and defined sound-stage. Most mass market stereo equipment is only capable of amassing an indistinct wall of sound. By pleasant contrast, the 3470 is able to place performers into distinct space without mucking up the rest of the imaging.

The most distinct sonic fingerprint of the 3470 is a warm midrange presentation. It’s full. It’s rich. It’s engaging. Surprisingly, it does not sacrifice a damning degree of detail or speed. While the midrange response is not as fast or precise as linear transistor amplifiers with high damping factors, it’s not as overtly fat and slow (some call it romantic) as your garden variety SET amplifiers.

The bass takes on the same general character of the midrange, keeping true to a strong and harmonically rich presentation. Once again, the focus is not on extracting every last detail on the disc, nor is it focused on transparency or precision. It is about delivering enough of the goods to keep up with complex bass riffs, all the while giving off a character that will never fail to deliver good scale and impact. It’s about making any kind of music enjoyable. Some may find the bass to sound a bit lazy. To these ears, it is what it is, full and engaging.

You could say that the treble is the only part of the 3470’s presentation that hovers near neutral territory. Competing Onkyo products tend to have a sharp and aggressive high end. Denon receivers from that period were often soft and rolled off. The 3470 hits a happy middle ground between the two, giving you enough bite and sizzle, all the while keeping it tame enough so you can sit back and enjoy less-than-perfect recordings. Could the highs be more resolute, extended, and refined? Absolutely, but then we’d be talking about a different product in a different price class. 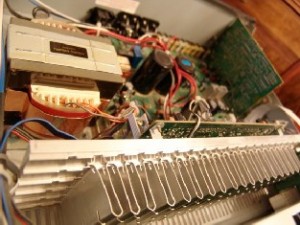 Phono Input: Sorry vinyl lovers, I’ve got nothing to report. I used the phono stage once, and that was a long time ago on a cheap Fisher turntable.
Headphone Output: Every now and then I hook up my Grado SR-60s to the HK. The headphone section takes on the same sonic traits as the HK, a warm sound with copious amounts of current. VMax: Absolute garbage. It is nothing more than a wave of convoluted distortion. I’d rather stick freshly sharpened pencils into my ears than listen to anything through the VMax setting. Subwoofer Output: I believe the frequencies sent from this output are cut off at 80Hz. It functions fine and sounds full, if not a touch over done. Tone Controls: The tone controls do a good job at attenuating the main frequency bands. Adjust to your heart’s content. Remote Control: Good styling, but I found it to be unnecessarily complex and oversized. AM/FM Tuner: It had zero trouble tracking and picking up stations. The reception was clear in most circumstances.

If you own, or plan on owning a Harman Kardon stereo receiver, please consider swapping out the stock metal jumpers between the main-in and pre-out with a set of decent interconnects, preferably those using a silver conductor. Doing so should yield very positive and worthwhile gains in performance.

At the end of the day, it’s only fair to judge the Harman Kardon 3470 based on the merits of what it is and who it was designed for. This was not a product designed to sit next to exclusive hi-fi gear in a small mom and pop showroom. It was designed to appeal towards a large audience that wanted a simple, affordable, well-built, high-quality stereo solution. For such humble aspirations, I feel the 3470 warrants recognition and praise for both its in-class technical achievements and its sheer ability to capture what alludes a number of expensive high end components, musical flow.

Considering what the 3470 averages for on eBay, taking the plunge should be a no-brainer – especially if you are a high school or college student looking for a sleek, powerful, good sounding starter amp. The 3470 is also a wonderful choice for the frugal audio enthusiast looking to piece together a decent sounding system for minimal investment.

This is Sean signing off – with a tip of the hat to team Harman Kardon for a job well done.