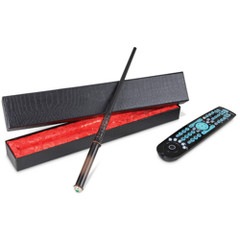 Isn’t that cool and fun controlling your TV or music player just by waving hands from your bed. And at times it’s really frustrating when you miss the remote control to reduce the volume while you need to attend an important call. But now the Magic wand remote control has made it very easy for you. A magic wand is the one that will allow you to control the home appliances with bare hands.

A magic wand that controls the electronic devices has been introduced by Hammacher Schlemmer, the longest running catalogue of America. Magic wands adds more fun than ever in controlling the devices such as TV, DVD, and most of the home appliances that uses a remote for controlling. The General Manager of Hammacher Schlemmer Fred Berns said "This remote control wand will awe and amuse family and friends as you master the TV, DVD, and other devices".

The magic wand remote control works on sensing the motion of the user and turns it into commands to the electronic devices, before that the magic wand has to read the device’s actual remote control to learn its controls. Once the remote and the wand are synchronized the wand is now ready to use. Just wave up your hand and the volume in your music players goes up, just show a gesture like stop and the music stops.