I admit it I like things that serve more than one purpose. The kitchen chair that serves as a step stool, my Swiss Army knife, 4-door pickups, and of course the smart phone. I even have a bit of a soft spot for vintage stereo receivers. With that declaration in place, I was honestly intrigued about the opportunity to review the Grant Fidelity TubeDAC-11 as two years ago (issue 55, July 2010) I reviewed the previous model, the TubeDAC-09.

The TubeDAC-11 is not a refresh; it’s a whole new piece of gear. The external layout both front and back is new. The case is very solid and a bit heavier than one might expect. All edges are rounded and the screws ﬁt tight. The review unit came in the brushed aluminum face (brushed black is available), with the left front face left rather clean with only the logo along with the POWER and DIGITAL red indicator lights. Next, is the INPUT select knob with a heavy feel and definitive click for each of the ﬁve inputs: LINE A, LINE B, S/PDIF, OPT, and USB. Traveling farther along to the right, the standard headphone input and ﬁnally, the volume knob.

Turning to the rear the layout is logical, something this engineer deeply appreciates. Along the left side are the three outputs: LINE OUT, TUBE OUT, and DAC OUT. The ﬁrst two’s output is variable (6v RMS max), controlled by the volume control. The DAC output is ﬁxed (2v RMS max) for those planning on using the unit as a solid state DAC. After a bit of room to separate the sections come the INPUT B, INPUT A, S/PDIF, OPTICAL, and USB. A vertical POWER toggle switch and a switchable 115/230v power cord socket ﬁnish the tour. FYI, the switch is set to 230v!

One thing I have noticed in the past few years is the improvement with interior layouts of audio gear. Starting with circuit boards and ending with the wiring the TubeDAC-11 is much neater than its older sibling. The circuit board is actually larger, allowing for more room, and the wiring over the board has disappeared. Accessibility to the 6n11 tube no longer requires delicate maneuvering. A toroidal transformer power supply is now used. To run the D/A conversion the TubeDAC-11 uses the Cirrus Logic CS4398 chip. 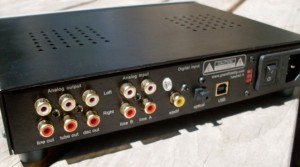 One thing I’ve always appreciated about Grant Fidelity, Aperion Audio, and Audioengine is that not only are the necessary cables/wires, etc. provided, but the complimentary ones as well. In the case of the TubeDAC-11 that meant ﬁnding the not only the power cord and USB cables, but the optical as well. Before listening I hooked up the TubeDAC-11 to the Wadia i170 iPod dock using the S/PDIF output to send the direct digital signal to the DAC. The 160gig iPod ﬁles are all in lossless format. I began with just casual listening for three days while I worked on a business project. When not in use I let the unit continue playing thru my Sennheiser HD650 headphones. After some 75 hours of burn-in I began the review process.

For the ﬁrst couple of days I used the standard headphone jack that meant getting only solid-state output. Since my own DAC is solid state I felt this was the fairest starting point. Immediately, I was struck by how dark/silent the back ground is presented with the TubeDAC-11. Remember the ﬁrst time you heard a cd being played after growing up with cheap sounding vinyl or cassette players? That’s the best description I can give. But in no way can it be described as sterile, the instruments and vocals all had naturalness, though with a bit of edge on hotter recordings, much like my Cambridge DAC.

Late spring here in the Pacific Northwest weather-wise is a smorgasbord; rain and sun intermingle on an hourly rate. Music choices that seem ﬁvng one moment are casted off as quickly as the sun parts the clouds and visa verse. One artist that seems to always ﬁt this mosh pit of meteorology is Mark Knopfler, especially his album Sailing to Philadelphia. The opening track “What It Is Now” with its extended cymbals near the end conﬁrmed that the TubeDAC-11 goes to the cliff edge to gather the farthest reaches of high frequencies 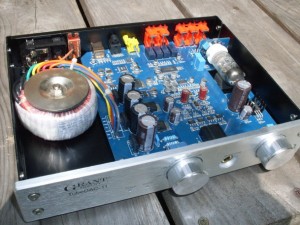 After a week of playing a wide variety of artists I grabbed my RCA to headphone interconnect of respectable quality and began listening via the 6n11 tube buffer stage output with ADA4075-2 opamps. I prepped myself for an obvious increase in noise and thicker sound. The TubeDAC-11 gave me another surprise, only the absolute vaguest hint of lower signal to noise, and just enough rounding of the sound ﬁeld edge to cool those few hot recordings. After switching the headphone jack back and forth a few times I was sold, the tube output to the HD650 was the future listening route via the cans. The shimmering edge that effects many solid state DAC’s was gone, yet the transients didn’t became heavy or slow. The sound did warm; Neil Young’s vocals in track after track of Harvest Moon retained that subtle hint of nasalness. The vocals in “Natural Beauty” recorded live have a sweetness that belies his age at the time of the recording. The xylophone that weaves itself in and out of the song is placed back but presents unmistakable warmth all the while the harmonica’s metallic sharpness comes out as several feet in front, just where it should be on stage.

Looking back upon my notes regarding the TubeDAC-09, I called that DAC aggressive and made for rock and roll. The TubeDAC-11 is a completely different beast altogether. Its signature is more universal, it doesn’t create a characteristic instead it presents a comfortable performance. The recording is allowed to stand on it’s own. Todd Rundgren’s Second Wind live* (*on the stage at The Palace of Fine Arts in San Francisco) cd isn’t the most three dimensional live recording, but it’s as clean sounding as one can get. The TubeDAC-11 conveys this truth accurately especially in “Who’s Sorry Nowti” The silence is eerily quiet at approximately 3:45 seconds when the lyrics end and the synthesizer kicks back in. The track “Kindness” with its transitions from simple to complex with plenty of synthesizer and occasional heavy percussion takes advantage of the “live” performance best. Where the TubeDAC-11 shows it’s worth as a top notch DAC/headphone amp combo comes during full blast rocker “Public Servant”. The Topping TP-31 struggled to maintain distinction between instruments. The TubeDAC-11 had no such qualms; guitars, cymbals and synthesizer were distinct even with the more two-dimensional sound.

With the TubeDAC-11 running into a Mini-Watt N3 SET amplifier and 1980’s Klipsch speakers at a college buddy’s home on a Sunday, I preferred the SS output of the DAC into tubes rather than the tube/tube sound. Too much rounding of edges, the acoustic guitar and cymbals lacked definition. Going back to Knopfler’s Sailing to Philadelphia with the solid-state output the title track gave proper detail to the compliment of Knopfler and James Taylor’s guest vocals. If a tube amplifier is your power source take a good listen with both outputs to ﬁnd what best works for you.

In this case, too much tube sweetness did exist.

In comparing the TubeDAC-11 to my Cambridge DACMagic the results were a bit of a revelation. Using the USB outputs from my laptop I placed both units into my main system of the Cambridge 640 integrated and Swan 2.1 SE speakers and level matched. The source was the Cambridge Azur 640A cdp. The DACMagic created a slightly wider soundstage and handled large orchestra music with a bit more detail. The TubeDAC-11 in SS output came oﬀ a bit crisper on the top end, but surprisingly was the quieter of the two with less ambient noise. Switching over to the tube output, the TubeDAC-11 became the more musical of the two DAC’s. The added warmth more than compensated for the slight loss of resolution.

Five years ago if you told me that the engineering quality of budget DACs would improve this much I would have responded with all sorts of factoids about commoditization. But something good has happened, sound quality has somehow managed to gain some footing. Maybe it’s because of small companies pushing the standard-­‐bearers. Whatever the case, budget audiophiles should be grateful. What Grant Fidelity has created with its Chinese manufacturer is a standout unit. For just $350, the TubeDAC-11 is a not-­‐to-­‐be-­‐missed audio bargain. The capability as a DAC, headphone amplifier, and traditional preamp with both tube and SS output makes it a must–keep unit. The question is where do I use it, work office, or home office?