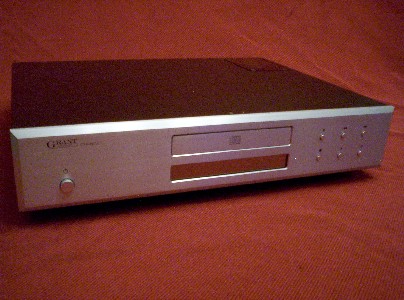 The Grant Fidelity CD-327A is a high quality CD player that is manufactured in China for Grant Fidelity which is based in Canada. Grant Fidelity is headed by Ian Grant a Senior Systems Designer and Engineer with an extensive multifaceted background in construction, audio, mechanical design and project management. Although Grant Fidelity is only one of his many endeavors, this company is an outgrowth of his love of music as recording engineer and musician. Grant was also a member of the AES and NAMM and has worked extensively to develop new music technologies with Seer Systems using advanced Midi Technology. The list of Ian’s accomplishments goes on and on, suffice it to say that Ian Grant is entering into the high end audio field in the same way that he does everything else with an all out effort.

After talking to Ian Grant regarding his line of audio products, it became apparent to me that these were designed for the music lover and the audiophile alike. For instance his approach to marketing is somewhat different than most, Ian is developing a grass roots demonstrator network. Individuals can purchase a demonstrator package of equipment for a modest investment and sell Grant Fidelity products to the music lovers in their locality from home. Not that he eschews the standard hi-fi dealer Ian just believes that the more folks hear his products on a personal level the greater success he and his dealers will have. This is quite a novel approach now days when many dealers don’t even want to take the time to do an adequate demonstration. One dealer I know won’t even demonstrate entry level products if they are available on the internet, he just carries the line so customers will have a local option to make a purchase if they so desire.

I selected the Grant Fidelity CD-327A for review from the demonstrator package the Ian sent me to examine. It was hard choosing which product to review since they are all well built and offer excellent value for the dollar. I settled on the CD-327A CD player due to my belief that the there is a lack of well built CD players at the sub $1000.00 price point.

Since Grant has heavily embraced modern technology one would think that his products would use new technology and they do including a custom designed 192khz / 24 bit high end DAC. But, in fact Grant Fidelity has also embraced old technology, the vacuum tube for the for the same reason most guitar players have, the vacuum tube in a properly designed audio circuit just sounds better than solid state. Grant Fidelity is all about good sound and that means utilizing the best technology for the application. Accordingly the Grant Fidelity CD-327 it uses two Philips 12AX7 vacuum tubes in the analog output stage to improve the sound of the digital source.

I have an agreement with my wife regarding audio gear. If I keep my gear out of the living room, she doesn’t really care what it looks like. The Grant Fidelity CD-327A is one piece of gear that really looks nice and shouldn’t be hidden away. The 22 pound 17” W X 13” D X 4” H enclosure is made from heavy gauge black painted steel, the brushed silver aluminum faceplate is beautifully beveled and finished especially for a $829.00 USD product. The front of the player has push buttons for power on/off, drawer open/close, play, pause, stop and track forward/ reverse. The rear apron has high quality gold plated RCA outputs for the right and left channels, an IEC power cord socket and a coax out for connection to an outboard DAC. Access to the two 12AX7 Philips analog output tubes is made via a small acrylic cover on the rear right hand side of the top cover. In addition the unit is supplied with a solid full function remote and IEC power cord. Another note, the factory packaging is excellent, the CD player is completely surrounded with durable foam padding and then double boxed for safety. None of the items I received had a scratch from shipping damage.

Since this unit was fresh out of the box, I initially set it up in my bedroom system to break it in before doing any critical listening. The factory manual sent with my unit was written in Chinese and since my Chinese is a bit rusty I wasn’t able to review it for set up instructions. Regardless even without instructions I was able to set the CD-327A up and have it running after just a few minutes. My bedroom system consists of a S.E.T Audio Baby Sophia tube integrated amplifier, an Oppo DV-970HD and a pair of Triangle Stella or Usher S-520 two way speakers mounted on 24” high lead and sand filled Plateau speaker stands. The listening position is situated so that my ears are about 7 feet back from the front plane of the speakers. I have the speakers pulled out from the wall 12” and separated by 6’. For purposes of this evaluation I used a 1 meter pair of Discovery Plus Four interconnects between the CD player and the Baby Sophia integrated.

After set-up, right out of the box it was apparent that this is an extremely nice sounding player. There is a 20 second delay after turning on the unit to allow the tubes to warm up and then the player operates normally. I played background music for the better part of a week before comparing the CD-327A to the Oppo DV-970HD. I consider the Oppo to be a nice sounding player for the money but the CD-327A is much more musical, and smoother even without much break-in. I listened to Modern Cool by Patricia Barber one of my favorite modern jazz CDs. While listening to “You & The Night & The Music” track number 3 from the disc, Barber’s vocals were front and center the notes from the piano floated in space filling the soundstage. The bass was solid and percussion was tight and rhythmic. You could really hear the texture and passion in Barber’s voice. The Oppo by comparison was lean, bright and slightly grainy. Small details such as the hand stroked conga drums were politely ignored. Compared to the Oppo, the Grant Fidelity conveyed a warmer, liquid and more detailed presentation. 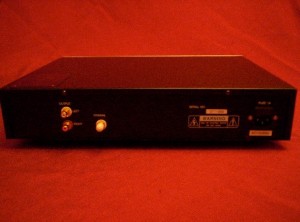 After a couple of weeks in my bedroom system I decided to try the Grant Fidelity CD-327A in my reference system. My reference CD player is a Primare CD 30.2; I was curious to see how the Grant Fidelity would perform in comparison when playing through my Audio Research SP15 vacuum tube preamplifier and Conrad Johnson MV60SE vacuum tube amplifier. The connections for both the Primare CD 30.2 and the CD-327A to my preamp were made using Discovery Essence Interconnects. The connection between my preamp and amp was accomplished via a 1 meter pair of Discovery Plus Four Interconnects, while the speaker cable I used was Discovery Essential Speaker Cable. For this evaluation I decided to use my Paradigm S2 Monitors secured with DAP Fun Tak, to the top of 24 inch high, lead and sand filled Target speaker stands. The speakers are situated 38 inches from the back wall, 8 feet apart and toed in on axis to the listening position which puts my ears 8 feet back from the front plane of the speakers.

What became apparent immediately was how good the Grant Fidelity CD-327A really is. I played “The Look of Love” by Diana Krall in its entirety on both CD players and was really impressed with how musical the CD-327A sounded. It gave up some dynamic energy and bass heft when compared the Primare but it sounded quite smooth and warm. It in no way had the hard, bright sound that is often present in CD players under the $1000.00 mark. What really impressed me was how close the two players were in performance. The Grant Fidelity did an excellent job of fleshing out the details, the brush strokes on the snare drum, the breathy sound of Krall’s voice were all placed within a wide and deep soundstage. Yes the Primare sounded richer providing a more dynamic and lively sound but it should, it cost 3 times the price of the Grant Fidelity CD-327A.

I put the Norah Jones CD Come Away With Me in the CD-327A and played track number 1 “I Don’t Know Why”. The CD-327A did a remarkable job of articulating the fine details of Jone’s voice and her performance on the piano. The bass, guitar and drums were presented in a smooth coherent manner that is usually not found at this price point. I noticed that in particular the acoustic guitar was rendered in a most realistic manner. When I played the “Painter Song” track number 10 from the same disc, the guitarist seemed to be sitting right in front of me. The combination of this fine recording and the Grant Fidelity CD-327A was an intoxicating combination. In contrast the Primare CD 30.2 provided a bigger, bolder sonic picture and was perhaps a bit more detailed.

The dynamic contrast between the two CD players was most evident while playing rock music. When I played “Texas Flood” the title track on the Texas Flood CD by Stevie Ray Vaughan and Double Trouble, the bass and percussive impact was superior while playing the Primare CD 30.2. You could “feel” the notes as Vaughan squeezed every drop of sound from his guitar. The Grant Fidelity CD-327A in contrast reproduced every note, drum beat and bass line in an accurate fashion but with a little less visceral impact.

During my time listening to the CD-327A, I never felt as though I was making compromises, which is a rare thing in audio. What it lacks compared to the more expensive gear is some dynamic impact and the large deep soundstage. Beautifully crafted audio gear that is this detailed and smooth sounding used to be extremely expensive. Ian Grant has lowered the price of admission bringing the Grant Audio CD-327A to a price point that we can all afford. I can honestly say that this CD player is the best I have heard anywhere near this price point and should satisfy the most discriminating listener. If you are looking for a CD player anywhere near this price point the Grant Fidelity CD-327A should be on your short list to audition. Well done Ian!

from aﬀordableaudio,  By  Todd Arthur