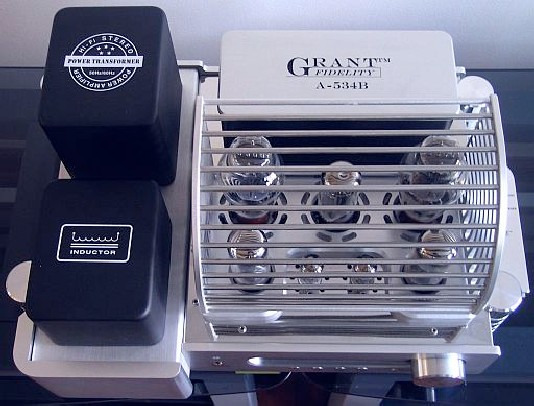 Peas and carrots, beer and pizza, cheese and burger, some things just go together. The Grant Fidelity A534B tube amp sounds so good with women vocalists that it is just like peas and carrots. Rated at 10 watts, using EL34 driver tubes in conjunction with a pair of 300B output tubes, this is obviously not a head banger’s amp. But it reaches the sublime with female vocalists of all types. But I am getting ahead of myself here.

The $1979.00 Grant Fidelity A-534B integrated tube amplifier is a hefty 60lb amplifier made in China for Grant Fidelity. The brushed aluminum faceplate contains a large volume knob, a digital display, 4 touchsensitive buttons for input selection and a jack for the headphone output. The power button is on the left hand side of the unit and when pushed into the “on” position, it illuminates the blue power “on” indicator light on the faceplate. Once the amp is warmed up and ready to go, the blue turns to green. The rear of the unit is contains four pairs of gold plated RCA input jacks for line level inputs in addition to high-quality 5-way binding posts for the speaker connections. The amp has provisions for connecting to either the 4 or 8 ohm taps on the output transformers. Additionally, there is an IEC power cord connection and a voltage selector switch for either 230V or 115V, depending on your locality. There is a large tube cage that can be placed over the tubes to keep prying fingers and pet noses from getting burned. The unit also comes with a sturdy metal full-function remote.

The Grant Fidelity A-534B is shipped well-packaged, and comes with 2 Shuguang 300B output tubes, 2 Shuguang EL34B driver tubes, 2 Shugang Chinese 12AX7s, and 1 Electro Harmonix 5U4GB rectifier tube. I used the Grant Fidelity PC-1.5 power cord sent by Ian Grant along with the amplifier. It is a nice upgrade compared with the stock cord and definitely improves the bass response. Since the amp is self-biasing, it is really a plug and play unit. Just install the vacuum tubes, make your speaker and input connections, select the correct voltage, plug it in, and you are ready to power up. Aesthetically, I prefer the amp without the tube cage. All listening took place with the amp devoid of said appendage.

Since every audio component sounds better after break-in, I used the A-534B in a system with the Oppo DV970HD universal disc player and a pair of Triangle Stella ES speakers for several weeks prior to doing any critical listening. I was very diligent in setting the system up using the same care and consideration that I would with other top-of-the-line components. I secured the Triangle speakers on top of 24” lead shot and sand filled Plateau speaker stands using DAP “funtak.” I placed the speakers in the same locations I use for my reference Paradigm S2 speakers, 53” out from the rear wall and 12” out from the side walls, angled in on axis to the listening position. I also made sure to utilize a good quality interconnect between the A-534B and the Oppo, in this case a pair of Eichmann Express Six with silver bullet RCA plugs. Additionally, I used a pair of Zebra Cables ZC-SP14DBI bi-wire speaker cables between the amp and the Triangle speakers. All listening took place in my well damped 18’L X 13’W X 7’ 6”’H basement listening room where I keep my reference system.

When it came to listening, I compared the Grant Fidelity A-534B to my Sophia Electric Baby 10 watt integrated and discovered that they had some strong similarities. Both tube amplifiers just sounded right with the women of jazz: Billie Holiday, Sarah Vaughn and Diana Krall all sounded warm, intimate and inviting when played through these amplifiers. The Sophia Electric Baby sounded more crisp and forward, while the Grant Fidelity A-534B sounded more romantic and relaxed, as if the highs were just a bit more recessed. I suspect that the 300B output tube employed in the A-534B was the reason for the romance, if you will. Originally produced by Western Electric to boost long distance telephone calls, it has been an audiophile mainstay for those favoring the SET (single ended triode) sound for 50+ years. 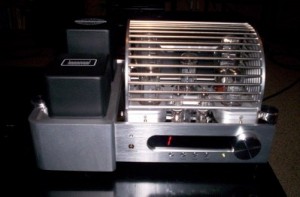 I inserted Miles Davis’ Kind of Blue CD into the Oppo’s drawer and gave it a spin. On track one, “So What,” both amplifiers gave an excellent presentation providing a good sense of space and air around the instruments. The Grant Fidelity A-534B had an edge in bass response over the Baby Sophia and Miles’ trumpet sounded smooth and distinguished. Coltrane’s tenor and Adderley’s alto sax were clearly distinguishable from one another while playing through both amps, but the Baby Sophia provided a slightly brighter sonic picture of the performance. The Grant Fidelity A-534B was more dynamic and sounded more powerful than the Baby Sophia despite the fact that they are both rated at 10 watts.

Next, I swapped out the speakers and the CD player, using my reference Paradigm S2 monitors and Primare D30.2 CD player for the remaining listening sessions. I then decided to play Bob Marley and the Wailers, from their compilation disc, Legend. Track fifteen, “Jamming,” had great pace and rhythm, its bass and percussive elements clear and concise. Marley’s voice blended nicely with the background singers, keyboards and the guitars without becoming too diffuse. You could really enjoy the music without feeling you were missing something. Yes, dynamically the Grant Fidelity had limitations with just 10 watts on tap, as the sound did become compressed when the amp was pushed, but overall it was very musical and involving.

As I said earlier, with women’s vocals the Grant Fidelity provided a beautiful and romantic presentation. I played one of my favorite tracks off of Diana Krall’s CD, Lovescenes, track two, “Peel me grape,” and just as with my reference system, the air around the piano and Diana’s vocals was clearly disseminated. Krall’s husky, sultry voice was warm and inviting, although with a softer attack compared to my reference Audio Research SP16 preamp and Conrad Johnson MV60SE amplifier. Again, the difference really came down to the warm liquid sound of the 300B output tube, which will just bathe you with its outstanding midrange.

Next I played “You Wreck Me,” the fourth track off of Tom Petty’s Wildflowers. The guitar and percussion are strong, rhythmic and loud on this somewhat bright recording, which can sound etched and grainy when played through inexpensive solid state gear. The Grant Fidelity A-534B rendered the performance coherently, with no loss of detail. Yet at the same time it honed the rough edges and kept the dynamics of the song alive. If you like to listen late into the night on your headphones, you will not be disappointed by the A-534B, because the headphone output is driven by the 300B output tubes, not a separate solid state circuit like most amplifiers at this price point. The sound was excellent and I probably needed to use finer headphones than my Grado SR60s to really appreciate its finer subtleties.

Does the Grant Fidelity have any weakness? Like everything made by human hands there are tradeoffs. Those audiophiles used to killer bass and power might not enjoy the nuanced sound brought forth by the 300B power tubes. Additionally, the Grant Fidelity is not as quiet at idle as the Sophia Electric Baby Sophia or my reference Conrad Johnson MV60SE. There is just a hint of 60HZ hum from the speakers up close that I don’t hear from the other amps. It is so slight, in fact, I hate to mention it, but in the interest of full disclosure it is a difference I noticed. 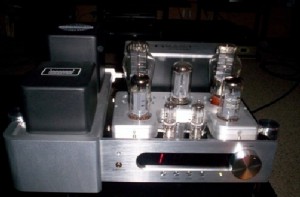 The GF A-534B was well-constructed and easy to set-up and use. I especially liked the way it drove my Paradigm S2s or Triangle Stella ES monitors to very reasonable volume levels in my listening room. With its deep and wide soundstage and smooth midrange, I would recommend this amp to music lovers of all types, but especially those who love acoustic jazz, chamber music, and women vocalists. I enjoyed my time with the Grant Fidelity A-534B immensely. It is truly a fun amp for those who like the sound and glow of the 300B vacuum tubes without the normal tube amp hassle.