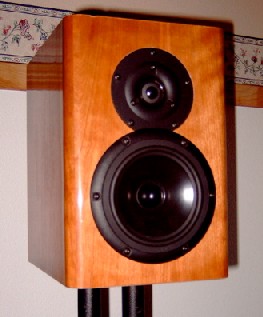 DIY stereo has come a long way from the Heath Kit soldering projects that one’s slightly off center neighbor used to build in his basement during the long winters. Nowadays, some of the best audio performance at bargain basement prices comes from various DIY companies that have bloomed with the Internet age. Speaker specific companies are no exception to this the age of commerce. Arguably, the best of this breed is GR-Research, out of Texas. Co-founder and it’s driving force Danny Richie, has developed a line of speakers that now satisfies virtually any design style. Over the years, his speakers have won accolades for pushing past the basics, and truly offering his customers audiophile quality at a price that would make Ebenezer Scrooge proud. 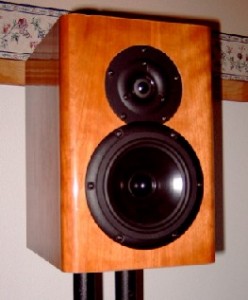 I first became aware of GR-Research last fall when I spotted the company thread on the stereo board Internet site.  I was looking into an MTM design and since I enjoy staining wood, it seemed like a natural match to poke around the board. What I found was a dedicated following that can best be described as a ferverent group equal to Apple Computer in it’s 1970’s days. But was most impressive was how quickly Danny Richie himself posted replies to any inquiry. As my fancy to MTM drifted off I filed away GR-Research and went on my merry way. When the brainstorm hit to start Affordable$$Audio, I knew that GR-Research had to be a part of an early issue. A couple of emails back and forth and a pair of his bookshelf AV-1’s were on its way.

The AV-1 is a small two-way bookshelf, using a 5-¼ inch driver and a one-inch silk dome tweeter. In emails with Danny Richie, he explained how he only accepts components that truly meet his rigid specification/testing requirements. Which means that he selects the sub components to meet his design. 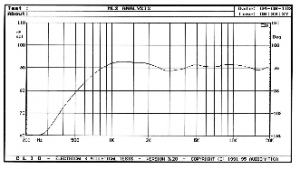 Above is the graph for the GR-T2 tweeter, while below is the frequency response graph for the M-130 woofer. Notice is taken to how smooth booth performance curves are throughout the sound spectrum. 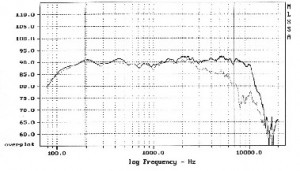 Unlike many mass-market speakers where all the attention is paid to the drivers, the AV-1’s crossover is made up of the same high-quality components. It should be noted that GR-Research allows for those who demand the absolute best the opportunity to upgrade to Sonic Caps. The speakers I demo’d had every upgrade offered. For the DIYer’s, Danny Ritchie’s diagrams are visual so there is no need to sign up for an electricians course.

The cabinet is made of ¾ MDF with rounded corners on all four sides. The top and bottom are flat. This simple design allows for the easy attachment of the flexible veneer of the owners choice. The interior option can include adding sound dampening material. The test speakers came with Blackhole 5 material to absorb any standing waves. This explains why the knuckle wrap test gives off the sound of a solid piece of wood. GR-Research offers a wide variety of pre-constructed options that meet the ability level of virtually any DIYer. Or, you can buy them fully assembled. The test models were finished in a cherry veneer with a medium stain. A nice touch is the embedded magnets that makes grill attachment a never worry proposition.

During my first week with the AV-1’s, they were placed approximately 3 feet from the sidewalls, but just 6 inches
from the rear wall. This allowed Frazier, my large greyhound/shepherd mix access to the front bay window that lies between the speakers. All my listening in this position was just casual, mostly while grading papers, etc. It was quite obvious that the positioning wasn’t optimal as the AV-1’s though pleasant sounding, were quite average. On a Saturday evening while the wife was out, and Frazier sleeping, I began playing with the back wall positioning. I finally settled on 23 inches from the rear wall with a slight toe-in. I hooked up my trusty Adcom GFA-535 amp and Harman Kardon PL-8450 cd player. For starters I connected the speakers with standard 16-gauge speaker wire. The sound improved dramatically. Three-dimensionality made its appearance bringing with it a nice, but slightly narrow sound stage. Yet, I still felt as if the AV-1’s were still being shy about what they could do.

After a quick break to change speaker cabling to Monster cable, the AV-1’s bloomed. A definitive deep end appeared, that I believe went much deeper than the 55Hz stated by GR- Research. The Blackhole material kept the low end to a very pleasant thump rather than an endless rumble. The soundstage broadened. No longer did I need to stay in my chair to catch the best sound. The AV-1’s, much like the Totem Dreamcatchers, displaying an excellent dispersion of mid and high frequencies. The harmonica in James Taylor’s “Little More Time With You” drifted into every corner of the room. The xylophone in the title track of Steely Dan’s “Aja” could be placed in the same spot of the sound stage from a variety of seated and standing positions to the same spot off the left speaker. 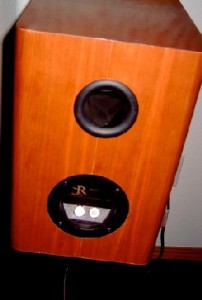 For the rock n roll enthusiasts, the AV-1’s will surprise you. During “Skate Away” by Dire Straits the bass pounded, and the speakers disappeared altogether. All that was left was the band, playing like I remembered from a tour stop at Arizona State in 1986. To make sure this sound wasn’t a one-song surprise, I played “Gaia” from James Taylor’s Hourglass cd. During the song there is a passage of a bass drum and bass guitar that hits me like a sledgehammer. The AV-1’s brought out its true sound, a slightly distant rumbling thunderclap, something I had only heard on a pair of Sonas Faber Cremona Auditors.

While playing light jazz, the AV-1’s exhibit a slightly sweet, melodic comfortability. Instruments nicely layer on top of one another without crowding out the previous front sound. “On the Heights” from Images Finesse cd demonstrates this stacking perfectly. Unlike most big brand bookshelves, the AV-1’s don’t exaggerate higher frequency piano notes. Normally, after a few piano songs I feel the urge to move about, instead I stayed in my seat. This naturalness led to a rather pleasant Sunday afternoon nap.

During a midweek run of classical music, the AV-1’s demonstrated the tight, punchy base I enjoy so much. The bass drum and tympanies of Aaron Copland’s “Fanfare for the Common Man”, hit hard and quickly dispersed leaving me leaning forward awaiting the next attack by the same instruments. Later in that same Telarc cd “Buckaroo Holiday” majestically popped from various points around the room with its playful interaction between individual instruments. All the while the melody coming forth from the speakers traveled the space in a warm cascading tone.

Imperfections you say? Only one, acoustic guitars did seem to stress the cabinet on a few songs. But, I believe this is more due to the speaker placement compromise I chose. Plan on spending quite some time finding the optimum placement. In addition, the AV-1’s do need to be played with using several different types of music to find the listeners own acoustical sweet spot.

The GR Research AV-1’s can be described in two words, SNEAKY SMOOTH. Since the drivers perform so evenly across the frequency spectrum, very little exaggeration occurs, therefore, I found myself suddenly realizing I was lost in the music. Papers weren’t being graded; novel pages lay opened to where I had stopped reading several minutes earlier. The pleasure of drifting away into the music is the essence of why I loved audio equipment so much and the AV-1’s took me there several times.

The AV-1’s are a wonderful example of the marriage of technology, computer testing and quality. If you have the desire to build it yourself, or just want to try something out of the standard retail mainstream give these understated speakers a try. For the money, they outdo B&W DM602 and Paradigm Studio 20, the speaker sound GR-Research was originally trying to emulate.