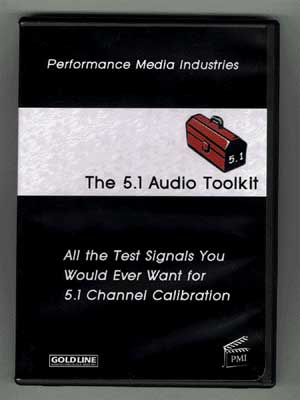 You can’t believe the number of times in the last few years that I’ve been asked for a DVD that had the proper test tones to calibrate either a studio or a home theater. While it’s fairly routine and easy to find some test tones in the studio, the home theater is a different story. Sure you can bring a signal generator with you, but it’s not so easy to patch things into a receiver that’s installed into a piece of furniture. But that was before the Audio Toolkit, a DVD-Video disc that gives you, as the package says, All the test signals you would ever want for 5.1 channel calibration.

The 5.1 Audio Toolkit was developed by Anthony Grimani, president of Performance Media Industries and a veteran of Dolby and THX. The disc is manufactured and distributed by Gold Line, which is a perfect adjunct to their extensive line of hardware test gear. The Audio Toolkit comes with no special instructions, since all you need is right on the disc itself.

The Audio Toolkit is broken down into seven Titles or chapters, each with a specific application. Title 1 is dedicated to acoustic test signals, and contains 82 tests that run the gamut from narrow band pink noise level tests to polarity checks to crossover polarity tests, 1/3 octave pink noise, and even gated noise for RT-60 measurements. Not only were these tests laid out in a logical fashion for quick calibration of a 6-channel 5.1 system, but there’s also a provision for the latest 7-channel THX Surround EX as well.

Title 2 revolves around electrical test signals with 11 tests primarily made up of sine waves and sweep tones.

The third title is just for listening tests and contains a variety of 5.1 Dolby Digital musical selections ranging from classical to big band to even some hard-core industrial. Also included in this section are three Dolby trailers that contain the only video on the disc. Not only did these cuts sound great, they had the added ability to easily exercise the surround system to its limits if required.

Title 6 provides various tutorials for using the disc to set up your system. This gives you a basic guide for calibrating your system via SPL measurement, frequency response, and speaker polarity. Also included are methods for performing subwoofer crossover polarity checks and octave and 1/3 octave frequency response calibration. Although the tutorials skew toward home theater usage, the information (as well as the tests) is easily adapted to the studio as well.

Title 7 is actually entitled Title 0.1 and subtitled A Whole Lotta Bass. This section has a single test consisting of a 115 dB swept sine wave that’s intended to verify the performance of the system’s subwoofer.
Titles 4 and 5 are advertisements for Gold Line and PMI products and services, and while that might seem a bit self-serving, they’re actually quite helpful and interesting. I learned a lot about the products of a company that I discovered I knew little about (Gold Line) and got some interesting background on the developer of the disc (PMI) as well.

This is a well thought out disc that delivers what it promises. It’s not long on glitz and slickness, but that’s what I really like about it. It’s simple and to the point, and enables you to get the calibration job done both quickly and easily while providing the ability for more complex adjustments if required.