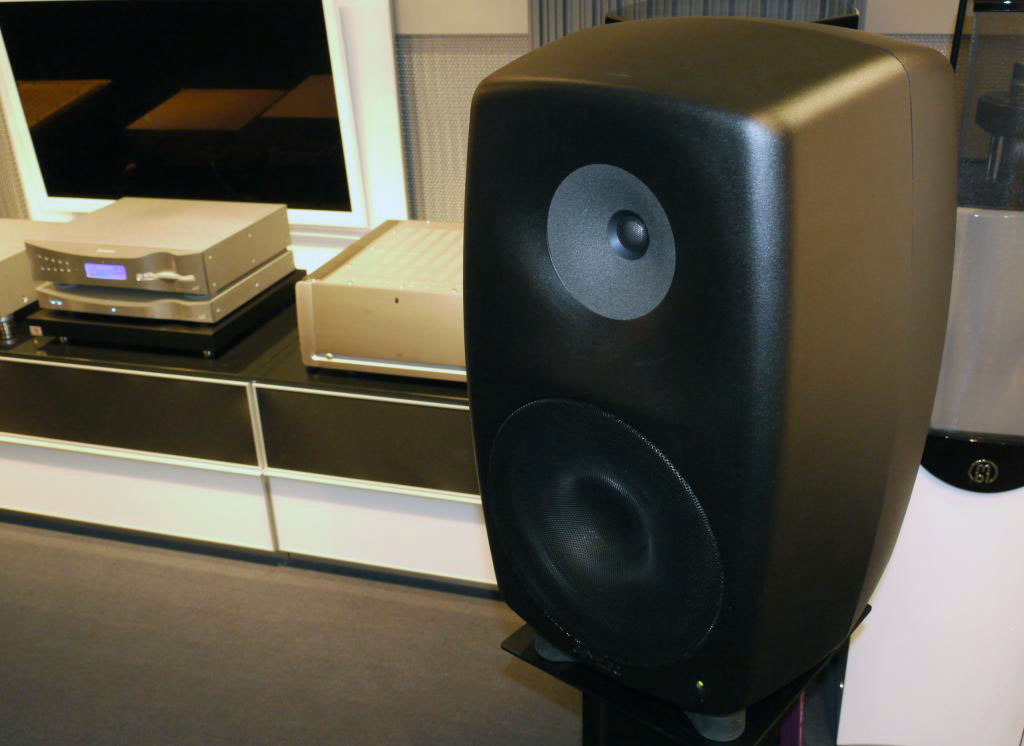 Genelec has been gradually adding models and features to its 8000 series of professional powered studio monitor loudspeakers since the line was introduced in 2004. Until now, each of the models was a two-way device.

As with all of the 8000 models, the 8260A employs a cast-aluminum “Minimum Diffraction Enclosure” with rounded edges and corners. The 8000 line cabinet surfaces form a “Directivity Control Waveguide” (DCW) for MF/HF dispersion control. With no room in a smaller baffle for separate HF and MF waveguides, Genelec took the innovative step of coaxially mounting the 3/4-inch metal dome tweeter within a midrange driver—the curved, flexible surface of the 5-inch midrange diaphragm being precisely specified to become an integral part of the midrange/tweeter DCW, the curve of the chassis face beyond the MF driver, continuing the DCW seamlessly for the MF.

While past LF/HF coaxial designs have been spot-on in producing a time-coherent wavefront, the woofer cone as HF waveguide, with the potential for substantial cone movement depending upon source and volume, gives the HF waveguide a changing surface that can modulate the HF signal. Genelec’s development of its “Minimum Diffraction Coaxial” (MDC) driver mitigates this effect and provides the coherency and imaging benefits of a coaxial point source at the critical frequencies.

The 8260A is physically the largest model in the 8000 line. It weighs in at 60.5 lbs and just over 23 inches tall (with the integral Iso-Pod isolation foot mounted). It is a “hoss” to move around, though a removable rear handle helps a lot. The 8260A houses a 150 W LF amplifier (for the 10-inch woofer) and a pair of 120 W amps for the MF and HF. Genelec’s specs state: “Maximum peak acoustic output per pair with music material ≥ 123 dB SPL @ 1m.” In short, they get plenty loud for near- and mid-field applications.

All of the Genelec 8200 models incorporate digital and analog inputs, network control and integral DSP (there is no 8060A analog only version). Genelec has achieved remarkable frequency response performance with the 8000 series, and the 8260A is no exception. The free-field response is rated at 29 Hz – 21 kHz (± 1 dB), and Genelec is known for publishing reliable specs. 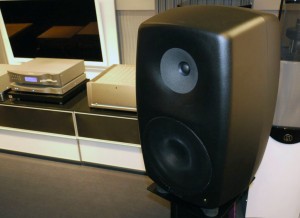 Regardless of how great a speaker system is, when it’s put into a given listening environment, the two will interact. Genelec’s DSP speaker line employs the company’s GLM (Genelec Loudspeaker Manager) and AutoCal software for remote computer control and automated loudspeaker/room analysis. In the 8260A, AutoCal computes the adjustment coefficients for two HF and two LF shelving filters and six fully parametric notch filters. As noted in previous Genelec DSP system reviews, AutoCal is intelligently designed, finessing filter settings and calculating interactions of each section for the maximum benefit with the least aggressive processing. The crossover filters are also separately developed within the DSP at 3 kHz on the MF/HF divide and at 490 Hz at the LF/MF border.

I’ll confess to beginning a review of Genelec monitors with an expectation that I’ll be impressed. Past experiences, brief trade show exposure to the 8260As and having talked to the Genelec team along the path of the 8260A’s development, fostered great anticipation. I let AutoCal work its magic and listened near continuously for days. The 8260s exceeded my expectations and then some.

I liken adding the MF driver to the 8260A’s design to adding a third player to a two-person volleyball team. The players there already are still doing their jobs, but the extra set of hands lightens their load allowing them to perform at a higher level. This can only happen when the players are well suited to one another, equally capable and well integrated, as is the case in with the individual components in the overall 8260A design.

The 10-inch woofer with Genelec’s cabinet efficiencies makes for a tremendous, but not hyped, low end. The LF extension is substantial and few would demand a subwoofer. Midrange detail is rich, fully fleshing out the LF overtones. Even though the MF/HF crossover is at the same point as other 8000 series models with 3/4-inch tweeters, the clarity of the HF seemed enhanced by the midrange support below crossover (compared to the 8020As that normally sit on the corners of my desk).

Transient response is excellent with a natural percussiveness. Vocals are eminently satisfying, sitting right in the proper pocket; reverb tails are detailed and full. Vertically, horizontally and in depth, imaging is spot-on. The performance of the Genelec 8260As feels effortless and natural.

The price for all this performance is substantial, but top performers command top dollar, and leading-edge design has its cost. If you are ready for a monitor experience without compromise, you need to lend a pair of ears to the Genelec 8260As.