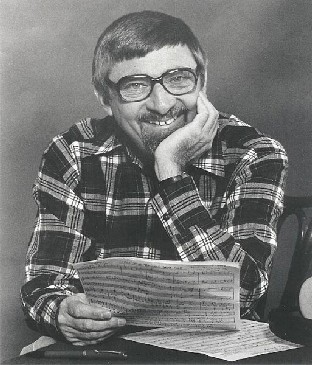 Gene Puerling died a  at age 78, and sadly, most obituary editors of newspapers around the nation chose to ignore this event. It’s unfortunate, because Gene’s work in vocal arrangements and performing was admired and outright copied by many.

Born in Milwaukee, Wisconsin in 1929, to a very musical family, he had little or no formal training, but went to work at 17 and never looked back.

In 1953 at age 24, he formed the vocal group, the Hi-Lo’s, and over the next eleven years, recorded 13 albums of intricately arranged tunes with wild and unpredictable harmonies. The other members of the Hi-Lo’s included Don Shelton, Clark Burroughs (who could hit G above high C), and Bob Morse, who replaced baritone Bob Strasen after several grueling years on the road. They were quite popular in and around the Los Angeles area, but were not getting needed exposure and record sales. They got their big break in 1956, when they became regular cast members on Rosemary Clooney’s variety show (several kinescopes of these performances are available on YouTube). Soon after, they became the “voice” of Hertz Rent-a-Car.
Remember the harmonized vocals “Let Hertz Put You in the Driver’s Seat”, as the man descended from the sky and was plopped into a Hertz convertible? That was the Hi-Lo’s. Another record label switch, this time to Columbia, along with the TV exposure brought them their long-desired fame, but fame is fleeting, and by 1962, they were without a record contract, when Frank Sinatra picked them up for his new Reprise label. The two or three albums they recorded for Reprise sadly flopped, in spite of critical praise. They broke up in 1964. They got back together for two German-produced albums on the MPS label in the late 70s, and toured occasionally for another 14 years. They might have done more together, but Gene was quite busy with another group, the Singers Unlimited. 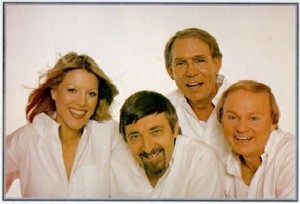 The Singers Unlimited, consisting of Puerling, baritone Len Dresslar (the voice of the Jolly Green Giant for many years), female vocalist Bonnie Herman (sang on more commercials than you could count, like State Farm “And Like a Good Neighbor”, Schlitz Beer “There’s Just One Word For Beer”, McDonalds, and many more), and former Hi-Lo Don Shelton, was formed in 1967. They got together to do work on radio and TV commercials, but before long, they started doing records, too.

From their first album, Christmas, in 1972, it was clear the Singers Unlimited were something different, and they continued for another 13 albums, through the early 1980s. Puerling, working with German record producer, engineer, and owner of the MPS record label, Hans Georg Brunner-Schwer, used the best recording technology of the time to layer voice upon voice, transforming the four voices into as many as 20 or 30 or more. They recorded in a rather odd way at the time for most of their sessions. The instrumentalists, including at various times jazz pianist Oscar Peterson, accordionist Art Van Damme, arrangers Robert Farnon, Pat Williams, and Rob McConnell’s Boss Brass, recorded their parts separately, usually in the U.S. or the U.K. When those tracks were laid down, the Singers Unlimited traveled to Villingen, Germany, where they would spend a few weeks putting down their vocal tracks, and then came the mixing, remixing, re-recording, etc., until the record was finished. They also recorded three acapella albums. In the mid-1990s, a seven CD retrospective, Magic Voices, was released by MPS, containing all but their Christmas album, which is still available separately, and still sells well enough that it remains in the catalog. They briefly got together in 1993 to appear on a Gloria Estefan Christmas album, at the request of famed producer Phil Ramone. They never performed publicly, because it was impossible to reproduce what they did in the recording studio, and the members felt it would be a let-down to their fans.

Puerling was nominated for 14 Grammy awards, and finally received one for his arrangement of “A Nightingale Sang in Berkeley Square”, as sung by the Manhattan Transfer, in 1982. The group broke up in the early 1980s as other independent projects took up more of each of the four members’ time. Gene resumed writing arrangements for other vocalists, and taught at vocal and vocal arranging workshops, and helped mentor other vocal groups including Take 6. He will be missed by his fans and peers alike.