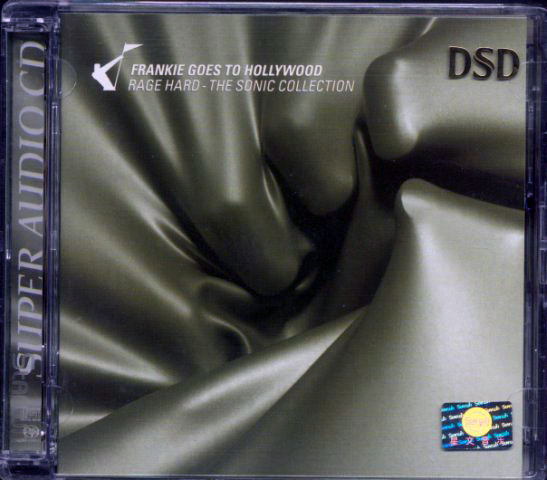 Regardless of the format involved, when it comes to multi-channel re-mixes, discs appear to fall into one of three categories.

There’s the live, ambient recording, usually with little surround content other than the sound of the venue. There are those discs whose surround channels have been created using nothing more than a studio ‘DSP’ matrix, which may turn out to be less effective than domestic schemes such as Pro Logic II Music or Logic 7 Music. Finally, we have the minority group, those titles that have benefited from an artistic, skilfully designed surround re-mix that actually heightens one’s enjoyment of the music.

Frankie Goes to Hollywood’s ‘Rage Hard – The Sonic Collection’, a greatest hits album of sorts, falls squarely into the latter category. It comes to SACD in the form of a hybrid disc; there are DSD and Red-book 44.1kHz PCM two-channel tracks, alongside an outstanding 3/2.1 multi-channel mix created by Dan Vickers and Iain Roberton.

Frankie Goes to Hollywood was born out of the late 1970’s and early 80’s, and although they only actually released two original albums, the band was responsible for many great records, particularly ‘The Power of Love’, one of the finest and emotive ‘pop’ ballads ever performed. Undoubtedly, Frankie Goes To Hollywood’s success was largely down to the band’s front man, Holly Johnson and his unique voice, producer Trevor Horn, whose mastery of the modern ‘pop’ record is hard to surpass (as is evident by this re-release), inspired marketing – remember the ‘Frankie Say…’ T-shirt slogans – and more than a smattering of precisely placed smut; it’s amazing what a banned homoerotic video and mildly pornographic disc artwork can do for one’s exposure. The band’s life-span was surprisingly short however – lasting little more than two years – and ended in acrimony as Johnson and Horn’s record company, ZTT, fought over the rights to the group’s music and name, Johnson eventually prevailing.

Leaving all the courtroom drama behind, this disc contains all of Frankie Goes To Hollywood’s major hits, amongst them ‘Relax’, the first single, which stayed at number one for five weeks in 1983, ‘Two Tribes’ and ‘The Power of Love’ two more number one singles. Then there are the unusual cover versions; ‘Born to Run’, (Do You Know the Way to…) ‘San Jose’ and ‘Ferry ‘Cross the Mersey’, originally recorded by Bruce Springsteen, Dionne Warwick and Gerry and the Pacemakers respectively. This makes for an odd mix, as it did when the album ‘Welcome to the Pleasuredome’ was released; one minute there’s a thumping dance beat, the next a gentle, straightforward song. But perhaps that’s part of the group’s charm?

In fidelity terms, ‘Rage Hard – The Sonic Collection’ is certainly a winner. Unlike so many ‘pop’ and rock SACD discs, the high frequency component is clean and bright, free of any warbling or undue noise. Another plus is that there is bass-a-plenty, sometimes with startling depth and force. ‘Maximum Joy’ is one of the quieter tracks, but the LFE content is phenomenal, you’ll need to tie your sub-woofer to the floor to prevent it walking across the room. It’s not booming or flabby bass either – if your sub is up to the task you’ll hear fast, dynamic and tightly integrated punch. It’s actually rather tricky to find fault with any particular element, but ‘Rage Hard’ (the track, not the album) does tread a fine line between cacophonous and messy, while the guitars of ‘Born to Run’ are just a tad harsh, exasperated by the track’s volume, which appears to be a few decibels higher than that of the remainder of the disc.

As good as the stereo SACD layer might sound, and the 44.1kHz PCM for that matter, as you may have already surmised, the real draw is the multi-channel mix. There are so many highlights it’s difficult to try to single out just a few, but here goes anyway.

‘Two Tribes’ opens with distant air raid sirens, adding depth and atmosphere to the piece, likewise the eeriness of ‘The World is My Oyster’, synthesisers circle the room in a clockwise direction during ‘Maximum Joy’, ‘Warriors of the Wasteland’ features a drum machine discretely placed into the centre channel while ‘San Jose’ uses the multi-channel pallet to create a spacious, airy sonic landscape.

The two standout tracks are ‘War’ and ‘Welcome to the Pleasuredome’. In the former, which begins with a Regan impersonator who you could swear is in the same room, Vickers and Roberton have placed the sung vocal elements into all four corners of the room, side-to-side, for and aft, creating a virtual questions and answers session between channels. Front L/R: “War, what is it good for? ” centre: “Absolutely” surrounds: “Nothing! ”. Fabulous.

The real killer track is ‘Welcome to the Pleasuredome’, all thirteen minutes, forty-four seconds of it. The piece begins with the sounds of a jungle, twittering birds and distant wood nymphs bathing, punctuated by circling fireworks. It then breaks into the recognisable thumping bass-line, but the vocal hook is far from familiar; “Hoo-Ha, Hoo-ha” is now broken into four parts and follows a front left to right, rear left to right path. Just as you think the time has come for a gradual fade and break, there is a sudden resurgence around the seven-minute mark and a rising and falling chord discretely placed into the centre that draws your attention back into the music. There are panning guitars, subtle harmonicas, drifting synthesisers…

Rather than being obvious ‘ping-pong’ events, all of the above are fully befitting of the context in which they’re used. At no point does a surround event prove to be distracting – which is an especially commendable accomplishment given just how much use is made of the surrounds, centre and LFE – they combine to create a vibrant and exciting music-listening experience.

There is of course, ample use of all five channels throughout, but the mixing philosophy does differ from track-to-track. ‘Relax’ makes copious use of the centre channel, anchoring Holly Johnson’s voice in the middle of the soundstage whereas ‘Ferry ‘Cross the Mersey’ features a phantom L/R vocal and only sparse use of the surrounds but incorporates thunderous low-frequency rumbles.

The only oddity to surface as a result of this review was the uneven running times of the three different audio options. The two-channel SACD track runs 1:06.41, whereas the two-channel CD layer runs 1:06:39. Not much of a difference there, but for some reason that isn’t apparent when making direct comparisons, at 1:04.47 the multi-channel SACD track is considerably shorter than the other two. Answers on a postcard…

To summarise: if you’d forgotten just what polished music Frankie Goes to Hollywood produced in the 80’s, then it’s certainly worth re-discovering the group. This disc’s fidelity is excellent, which is unusual for a ‘pop’ SACD title, and on top of all that you have a fantastic tour-de-force of a multi-channel mix – ‘Welcome to the Thunderdome’ alone is worth the price of admission. It’s a win, win, win situation.