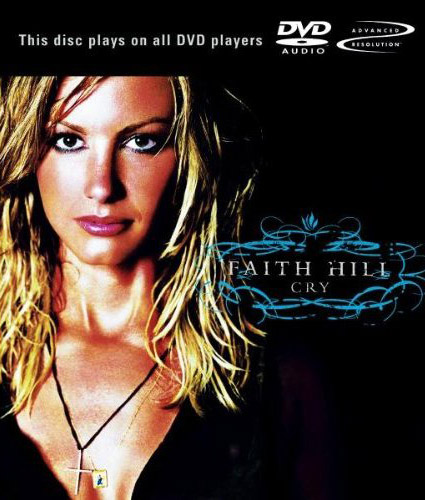 Faith Hill is one of the new breed of ‘country’ music stars, an artist who has successfully crossed over to the mainstream and become one of the world’s most recognisable female singers. Comparisons have been made to Shania Twain, perhaps because both women ooze sex appeal, but fan of Shania that I am, even I have to acknowledge Hill’s superior vocal talents.

‘This Kiss’ was the song that raised Faith Hill’s international profile and moved her out from the country and western pigeonhole, but she was placed firmly on my radar screen thanks to a rendition of the American national anthem at Super Bowl XXXIV. It never ceases to amaze me how many artists trot out to sing (or play) the ‘Star Spangled Banner’ only to murder it with performances that one feels should end with either their head exploding or the ground opening up to save them from further embarrassment. Who can forget the dire efforts of Cheryl Ladd, Kathie Lee Gifford and Cher, yet here was a woman who could sing, really sing, hit all the right notes and just happened to look like an angel. Such was the impact of this performance, not just on me but everyone else it seems, that Warner Bros. ended up releasing it as a single later that year as radio stations across America had naughtily been playing a version recorded directly from the TV telecast.

‘Cry’ is not a one-off disc from an esoteric artist who nobody has ever heard of, it is Faith Hill’s fifth studio album (all previous works multi-platinum) and follow-up to 1999’s runaway success ‘Breathe’, which won three Grammy® awards, and as such an important DVD-Audio release. ‘Cry’ is not groundbreaking, but is a sassy album, a mixture of power ballads, upbeat numbers and the occasional more experimental track, ‘I Think I Will’ for example. You’ll need a microscope to find any obvious country influences, although they are there if you look hard enough. This disc is more about strings and drum tracks. There are some classy vocals from Hill who is once again on top form and there’s little to criticise, although if I were forced to, I’d have to point a finger at the backing vocalists used upon some tracks. They have a hard, raucous edge to their voices which means they don’t gel well with Faith’s own style. Think if you will, of it as a mixture of sandpaper and silk.

Both the DVD-Audio and CD versions of ‘Cry’ became available within a few days of each other, and when the high-resolution disc surfaced on November 5th the CD-DA was at number two in the Billboard 200 chart (number one the previous week) and also number one in the Billboard country music chart. The DVD-Audio and CD versions are identically priced, so what does the former have that will appeal to the masses and lure them away from the evil Compact Disc? Well, leaving aside the potential of high-resolution and multi-channel since neither are high priority for the average listener, Warner clearly decided to use Faith’s knockout visage to entice customers to the format. Building upon the ‘wet-look’ cover artwork, added bonuses include the full-length video for ‘Cry’, some interesting studio sessions, a short sequence from a recent photo session and a conversation with Faith herself. See our disc captures for the visual treats in store. Sure, all the clips could have been longer for my liking, but they’re miles better than nothing, which is what the CD-DA has to offer in the way of sweeteners. Completing the collection of extras there are web links for computer DVD drives and a list of disc credits.

So what do we have so far? Let’s see… great singer, powerful songs and adequate supplementary materials. All of this is enough to keep Joe Sixpack happy for sure, but what about you and I, the more demanding listener? We get to choose between 448kb/s Dolby Digital and 1509.7kb/s DTS, or over on the DVD-Audio layer 3/2.1 24-bit 96kHz MLP and a dedicated two-channel 24-bit 96kHz track.

For that all-important multi-channel mix, up to the plate steps ‘legendary’ engineer Elliot Scheiner… who promptly drops his bat, trips on his shoelaces and falls headlong into the bleachers. What Scheiner has created is a deconstructive mix, one that takes a carefully crafted recording and renders it almost unrecognisable.

Scheiner has repositioned instruments so that they fall clumsily from the soundstage and then, by tinkering with the relative levels of the elements that remain, has created a disjointed, messy muddle which pales in comparison alongside the original finely honed two-channel version, in which all components are tightly integrated and perfectly balanced.

Undoubtedly the worst sin of the multi-channel re-mix is that Faith doesn’t sound like, well, Faith! Her vocals have a different tonal quality to that of the two-channel version, appearing to have some midrange bloom, which makes her sound unnaturally nasal and congested. There are times when one can clearly discern the processing that has been applied, the opening of the title track being a prime example. Listen to the lush, intimate vocal of the two-channel version and then compare it to the reverb-soaked, EQ’d multi-channel mix and one is in for a nasty shock.

Comparing the two-channel and multi-channel mixes really isn’t a good idea at all, in fact it’s a depressing exercise. Unfortunately such comparisons also happen to be my job and as such are unavoidable, but I will go on record as having suffered, literally, through the entire multi-channel experience, harsh, as that may seem.

Take the opening track; the up beat ‘Free’ for starters. In the two-channel mix a hi-hat is placed half-right and it is used to emphasise the half-beat. In the surround mix it has almost completely disappeared, replaced by a far-too-loud percussion ‘shaker’ that draws one’s attention to left surround. Previously subtle elements such as the rhythm acoustic guitar are also far too forward in the mix and Hill’s vocal sounds dry and thin.

As is the case throughout the album, for the title track Faith’s voice has been mixed as a phantom L/R image, but there is some centre content, who knows why, which only goes to blur the phantom image and add unnecessary comb filtering artefacts, which are likely to change the timbre of her vocals yet further in systems without perfect time alignment. None of this applies to the two-channel mix where one feels one is standing face-to-face with the performer.

The sexy ‘Beautiful’ was a perfect opportunity to use a hard centre, at least in part, for the track features a number of spoken passages. Again, Scheiner has lazily decided to use an out-of-phase phantom L/R image that fails dismally when pitted against the true two-channel mix. I also feel Hill’s dynamic range has been squashed somewhat and there is less visceral impact from the bass of the surround version. Adding further to my pain, the backing singers I wasn’t too keen on to begin with now blare out from the surround channels.

Thankfully Warner Bros. has saved us from this pain by providing a dedicated 96kHz 24-bit version of the original two-channel mix, and boy am I grateful. The two-channel is an outstanding production, rich, lush, deeply textured and presents Faith without wanton ‘artistic’ distortion. The fidelity is acceptable too, but not really outstanding, it’s about par for the course for modern ‘pop’ records. The DVD-Audio version does outperform the CD in some regards (the crashing cymbals, of ‘One’ for example, sound muddled at 44.1kHz) but not by a huge margin.

If you want my advice, you should buy the DVD-Audio disc because you get to see video of Faith in all her glory, but put a stake through the heart of its multi-channel mix and listen exclusively to the two-channel. If you really want surround, then pass it through a Dolby Pro Logic II or Logic 7 matrix because, although this shouldn’t ever be the case, the ‘guesswork’ results from both matrices are vastly superior to Mr. Scheiner’s deliberate concoction.

Oddly enough, the two-channel option on the DVD-Video layer is not PCM but 448kb/s 2/0.0 Dolby Digital. Sure it’s a high bitrate but this is still an undesirable choice on the part of Warner Bros. when disc space is not at a premium. The disc does begin immediately upon insertion into either a DVD-Video or DVD-Audio player, so at least one doesn’t have to fumble around with on-screen menus and the straightforward toggling between available audio formats by simply pressing the ‘Audio’ button on your remote control is a welcome addition.

I’m still going to recommend ‘Cry’, despite the horrible multi-channel mix, simply because of Faith Hill’s performance and the availability of a high-resolution, dedicated stereo version. However, I do feel this DVD-Audio disc represents an opportunity wasted. Had the multi-channel mix been created with care and attention, given the strength of the material and Faith Hill’s popularity the title would have been a “must buy”, rather than one that leaves nagging doubts over how the general public will perceive music in surround.