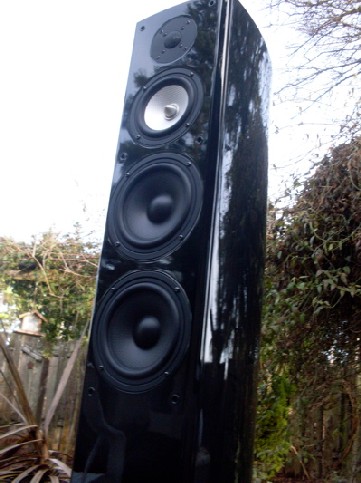 Like all other forms of information during the dawn of the 21st century, the best way to get noticed is to go viral on the Internet. It’s no different in audio, once the forums start buzzing it’s like watching a hurricane develop off the west coast of Africa. Each day the buzz grows and develops a life of its own. This past fall EMP Tek, a new company with roots tied to RBH Sound came out with their Impression Series E5Ti mini-tower at the jaw-dropping introductory bargain amount of just $400 a pair. The price alone virtually guaranteed buzz, but add on the beautiful high gloss red burl veneer and the viral activity began. Of course the initial energy could only last a short time, to get to the next level sales and new owner posts needed to happen. It didn’t take long for the positive comments to be listed online.

I first heard of the EMP Tek E5Ti in a conversation with A$$As founder after he had a chance to hear them at the Oregon Coast GTG in October. The E5Ti in an afternoon comparison listening session easily bested a very well known Canadian Internet direct model of similar stature by overwhelming vote according to the dozen or so that sat for the comparison. All this information intrigued me enough to agree to take on the review.

The EMP Tek E5Ti weren’t the only boxes to arrive from the manufacturer as next month I’ll have the matching E5Bi monitor, and the E5Ci center channel reviews. I was quite excited to see the Red Burl veneer. However, disappointment temporarily reigned when I saw the “Black Ash” label on all the boxes. Over the years I’ve found that manufacturers just didn’t put much effort into properly finishing black ash or virtually identical black oak grain pattern. The paint or stain was usually poorly applied and lacked sheen, or in worst-case scenario you ended up with a smeared ebony black stain. Therefore, I was absolutely thrilled to see that EMP Tek had taken the time to use a high gloss clear coat on top of the black. The grain shows off as metallic silver threads. It actually truly is stunning, especially in sunlight. Hopefully, the rest of the industry will take notice.

The E5Ti uses the now popular tear-drop design, extremely similar to the Polk Audio RTiA design of a few years. All the edges are slightly rounded. The grill extends down from the top front covering all but the bottom six inches or so. The drivers include a 1” inch fabric dome tweeter behind a wire mesh grill, a 5.25” inch aluminized mid driver, and a pair of 6.5”inch poly matrix bass drivers. A rear port is placed on the bottom of the back panel just below the dual set of binding posts. If one looks close enough the sticker warns the owner against biamping. Personally, at this price range bi-wiring/amping is a rare occurrence, I would rather see a single pair of higher quality posts, as the sample pair failed to grip my banana plugs securely. To EMP Tek’s credit all future manufacturing runs of the E5Ti will include just a single pair of posts. 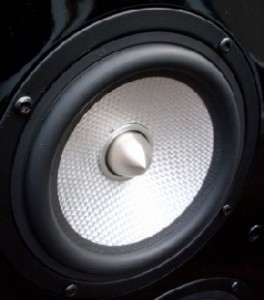 Cabinet construction consists of ½ inch MDF, a bit surprising given the size of the cabinet as competitors focus on 3/4 inch, and one in particular, uses a full 1 inch. Of course the goal is to create a solid cabinet within the production price point. To stiffen the cabinet the tweeter and mid drivers are compartmentalized and cross rib is used between the two bass drivers. Ample sound deadening material is used for the tweeter and midrange driver, a lesser amount for the two bass drivers. A series of knuckle rap tests yields a slightly plastic hollow sound. I foresee a select number of owners adding additional material including Black Hole to further reduce various cabinet resonances.

All four drivers are set flush to the non-veneered 1 inch thick front panel that sits against the top and sides with an exposed groove. Two small counter sunk screws are barely visible, at the bottom front. The mid and bass drivers fit perfectly flush, but both tweeters sat a bit lopsided. With modern CNC cutting this is a bit puzzling, but a minor issue to be fair. Beyond the tweeter mounting, fit and finish was excellent. EMP Tek provides four non-spiked “points” with a small ball-bearing tip, instead of a two piece-spike and cup for use on hardwood floors.

I spent about 30 minutes finding a suitable position in my great room (14ft x 21 ft x 16ft vault) for the E5Ti’s, placed some 30 inches from the back wall and 7 feet apart. After some twisting back and forth I settled on no toe-in, a position I found offered the best overall sound between on and off axis listening. The “points’ were then attached.

The E5Ti’s are a 6 Ohm nominal speaker, the manufacturer recommends amplification of at least 50wpc. Before those of you with lower-powered gear become disappointed, the E5Ti’s paired extremely well with my 60wpc Cambridge 540v2 integrated amplifier. I found the E5Ti’s to have an easy-going North American sound. Translated it means smooth with a couple of light boosts at certain frequency sweet spots. This was quite apparent while listening to a William Ackerman cd I had recently scored from a garage sale for all of 25 cents. The bass rise was subtle, but pleasant none-the-less. The middle and lower acoustic guitar notes were very natural and presented themselves with a bit of tube warmth in “The Bricklayers Beautiful Daughter”, though no such glass components were in use. I did detect a bit of harshness in an upper string chord in the track “Ventana”, though no such edginess could be heard in the flute of the ear-pleasing song “Visiting”. 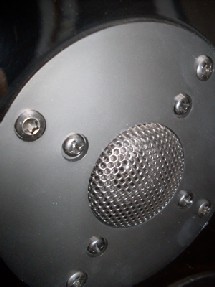 Turning to rock music, I find Cold Play’s Viva La Vida disc with its dynamics and background details an interesting test for speakers. The opening track “Life In Technicolor” does push the E5Ti tweeter to its limits. The same can be said for “Lost!” with the synthesized organ holding notes for several counts. Bass detail is good at the very bottom end. The E5Ti’s won’t kick one back in their seat, but the notes are discernable. The most impressive track from the disc for the E5Ti’s is “42”, the synthesized string about a minute into the song pulled me forward to hear more.

If there is one definite criticism I have with the E5Ti is the lack of a defined soundstage in regards to instrument placement. With only a few exceptions I couldn’t pinpoint a specific location for a particular instrument. I went back and spent a good couple of hours adjusting the speaker placement, with no luck. In comparison to the Paradigm Monitor 7 at $700 pair, or the Aperion 4T at $650, the E5Ti would finish third with my ears. But once again, we are talking about a speaker that can be purchased new for just $500. With some tweaking that I’m sure is already going on, that gap may already be narrowing.

With our electrical energy needs ever expanding, I’m of the opinion that more and more budget receivers and integrated amps will go class D in the next few years. With this in mind I first tried out the E5Ti’s with the feisty 25wpc Gizmo amp from Tweak City Audio. Seeing the potential I borrowed an Underwood Modified PS Audio Trio C100 integrated class D from A$$A’s founder. That confirmed it for me, the E5Ti is definitely class D friendly. The dry undertones that many speakers present with class D chip amps I didn’t detect with the E5Ti’s. The sound was very consistent, if not a little cleaner than with the Cambridge 540v2. 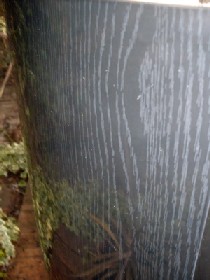 One of the questions I’ve received recently is something that rarely gets discussed in reviews of speakers, “Are these speakers apartment friendly?” Since the E5Ti’s are not overly heavy, I carried them upstairs to a spare room and set them up with PS Audio integrated and my iPod. The goal was to see just how much bass boom could be detected downstairs with the speakers output at about 80db. While the listening room had a pleasant bottom end with a bit of aggressiveness. Downstairs the rumble was ever so slight, and I’m a bit of a fanatic about hearing any boom. Therefore, I happily proclaim the E5Ti to be very apartment friendly as long as one doesn’t go overboard. But if the need arises, invite the neighbors over when cranking the tunes.

The EMP Tek E5Ti is a budget mini-tower that looks and performs above its price point. It’s the kind of speaker that frustrates the hell out of longstanding companies like Infinity and Polk in that it beats up on their similarly priced budget models. The simple reason is that the designers actually cared enough to make it truly sound better than it’s price-point, rather than just meeting it. Combining the E5Ti with a class D integrated, or solid state receiver, along with the Emotiva ERC-1 cdp, and for $1200 the listener has put together a very worthy two-channel budget system. 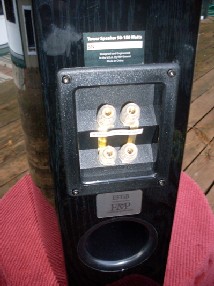 We’d like to thank Dan Nielsen for a great review of our E5Ti Tower Speakers. We’re pleased that Dan agrees that we’ve designed these speakers to perform well above their price point. We’d like to stress that this trait is pretty typical of EMP Tek speakers as we always strive to have the performance exceed the price point of our products. We’re also happy that Dan enjoys the gloss black finish. The decision to send Dan the gloss black ash speakers rather than the gloss red burl finish was difficult, but we felt it necessary to show A$$A’s listeners how beautiful the gloss black ash finish really is. Thanks again to Dan and to A$$A for everything. Daren Egan, EMP Tek