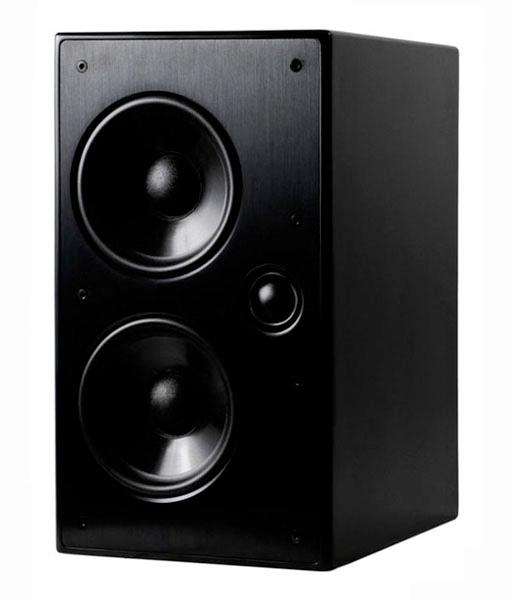 Everyone you meet changes your life in some way. Some people make small changes that last only moments and others make changes that last a lifetime. I never guessed that the pretty blonde I met in a small coffee house would someday be my wife, just like I never guessed that friendly coworker would suck me into a hobby that could take over my life. Well the coworker has passed now but this crazy hobby lives on. I came to this hobby sort of through the back door. Starting with a nice pair of speakers that grew in to a spectacular home theater. My first lesson in audio (taught by said coworker) was that there isn’t another piece of equipment that the listener actually hears other then the loudspeakers. With that in mind I’ve always been picky about loudspeakers.

When I was asked to review the Emotiva home theater speaker set, to say I was a bit skeptical would be an understatement. In my mind a home theater speakers need to move air to be realistic. I couldn’t see how 3 small MTMs using only 5.5” mids in the front could convincingly portray a true theater environment. But I tried to keep an open mind while I waited for the boxes to arrive. In actuality I was excited to see what all the Emotiva buzz was about.

Boy did the boxes ever arrive. The front three speakers were packaged in a single box weighing in at a whopping 63 pounds. The UPS guy was glad to have that delivery done! Each speaker was in an individual box inside of the Goliath shipping carton, making the speakers double boxed of sorts. As I began to open the smaller boxes it became apparent I was dealing with a company committed to setting the standard for value speakers. Each speaker was delicately placed in beautiful soft black felt bags, each with a nicely tied bow on top. Now it was starting to feel like Christmas had indeed come early. This packaging was a huge step up from the other bargain speakers I have reviewed. The weight was unexpected as well, at around 20 pounds per speaker my back was feeling it after moving this entire set of speakers around just a few times.

I really wanted to get these hooked up and playing, unfortunately at this point I was presented with a genuine A$$A problem. My home theater consists of 2 floor standers with bookshelf speakers for the rears. With the Emotiva delivery, now I have 2 speakers that wouldn’t be much use to me if they were placed directly on the floor. Even cheap stands from Best Buy would run me 60-80 bucks that the “Financial Coordinator” was not going to approve by any stretch of the imagination. I didn’t want to disassemble my two-channel system for those stands. It also somehow didn’t seem right to use $500 worth of stands under $400 worth of speakers. In the end I built a pair of DIY stands that were written about in a recent issue. Feel free to check out that review, but the stands were definitely worth the time and money invested. 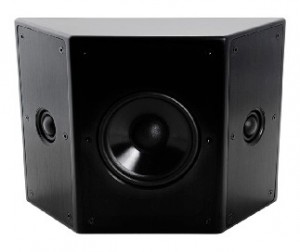 Now to put the project together in the family room, and fire it all up! I had to recalibrate my Sony 3ES receiver to the new speaker system. Once that was done surprisingly; I was immediately impressed with the total package. I haven’t mentioned it yet but the rear channels are Dipole/Bipole speakers, meaning they each have a tweeter that points to the left and right with a midrange driver firing to the front. There is a switch on the back of these speakers to select either Dipole or Bipole operation. The design had a definite advantage over my bookshelf rear channels, especially for the people not blessed enough to sit in the sweet spot! The mentioned switch also makes integration a breeze, why doesn’t everyone do something like this?

The setup configuration I changed on the receiver was to set the front 3 speakers to small, and changed the crossover point to 100htz. This gave the sub-woofer a much bigger job then it was used to but it was more then up to the task. Now I was expecting to begin a long break in period. As expected the tweeters were a bit to bright right off the bat, and the midrange was somewhat muddy other then that they didn’t sound bad at all right out of the box! Surprisingly this process only took about 30 hours of play. When you track your TV/Movies and Music time, it is remarkable how fast 30 hours can fly by!

The speakers from Emotiva have their own unique set of toggle switches to control various aspects of the sound. Each of them has a variable crossover for the tweeter at 0db -2db and +2db. This really comes in handy for dialing in the right sound for a specific system and room. The ERM-1 also has a boundary compensation setting to rectify sound issues derived from being too close to a wall or ceiling. The ERD-1 has a bipole/dipole selection making this speaker ideal as either a rear or side surround, this setting also makes vertical or horizontal mounting an option. I give Emotiva very high marks for included wall mounting plates for these excellent and versatile speakers. 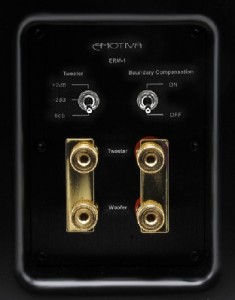 After the short break-in period was over I put in The Aviator to watch the Beverly Hills crash scene. When those big engines fired up I immediately lost all doubt about those 5.25” drivers. Please keep in mind that I am using a 12” Dayton Titanic sub to handle the hardest work. If you attempt this demonstration without a good sub you certainly wouldn’t be as impressed. I transitioned to the final battle in the Lord of the Rings, Return of the King movie. The Dynamics were everything I expected and then some. For surround imagining I used Harry Potter and the Goblet of Fire, dragon egg task. I like this scene for imaging because there is so much going on around the entire soundstage and not all of the sounds are expected to evenly transition between channels. This is where those Dipole rear channels really strutted their stuff. The surround image was more convincing across most of the room, where my traditional setup isn’t as convincing outside of the sweet spot. This is a system that seems to be made for movies. While there wasn’t the last bit of clarity and all of the hard-hitting power had to come from the sub, these bargain speakers did an exceptional job in their chosen arena.

I am first and foremost a music lover, so I also put the Emotiva set through several hours of music listening. Some in my home theater using my Cambridge Audio 540D and DVD-A disks, but also 2 channel with the Roku Soundbridge M1000. These speakers are pretty good with two channel music, but the bass isn’t as well compensated during musical passages as it is with movies. It is harder for a big sub to transition at 100htz in subtle music then in exploding theater situations. The most obvious issues were with Classical and Jazz piano. The midrange was sweet, but even after working with the phase and crossover points the mid-bass range transition wasn’t as accurate as I’m used to with the larger 6.5” midwoofer based MTMs I usually use. The Pop and Classic Rock recordings sounded very convincing though.

The high frequency control was great with the variable crossover. For those who love to tweak their sound the 3 way tweeter crossover can provide hours of entertainment. I found that the 0dB setting worked best for music and the +2dB a bit better for movies and TV. The beauty is that you’re not stuck with what was designed and may or may not fit your system. The switches can be changed at will. I always muted the amp before changing the setting just to be safe. I have a CD player that is hyper accurate, I don’t dig it out much because it is so bright that I usually get a headache in no time. To put the variable crossover to the ultimate test I dug out my Sony CDP-CA22ES. With the tweeter set to -2dB it was a very listen-able experience, although still a bit fatiguing. Please note this was not a negative reflection on these speakers, there is a reason this player lives on the top shelf of my son’s closet. My detest of the shrill noise made by this player destined it to be out of my system the moment it was purchased. Overall I liked the two-channel representation of the Emotiva ERM-1 speakers. It wasn’t until I put my LJM system back in for reference and reset everything to my original configurations that I truly realized the differences. The larger speakers did have deeper and more accurate bass through out the lower midrange, but the front two speakers cost more then the entire Emotiva 5 speaker set. To say is was an unfair comparison would be a very large understatement. 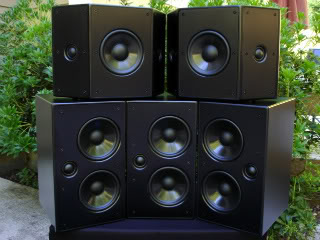 These Emotiva loudspeakers, like the people I have met in this journey, have changed my perceptions a great deal in the months that I have had them. My skepticism about smaller drivers was assuaged a bit by the sealed boxes. Although I will be sending these back I the sound was defiantly good enough to make these keepers. I would have thought I would be recommending these for a smaller theater room, but I have had no problems with them in my 16X20 room. Emotiva now has some larger options available for people who feel that they truly need that extra bit, but for the money these are really all just about anyone would need. I recommend anyone in the market for a smaller home theater speaker system give these a shot, you will very likely find you you have also brought a new positive experience in to your life.