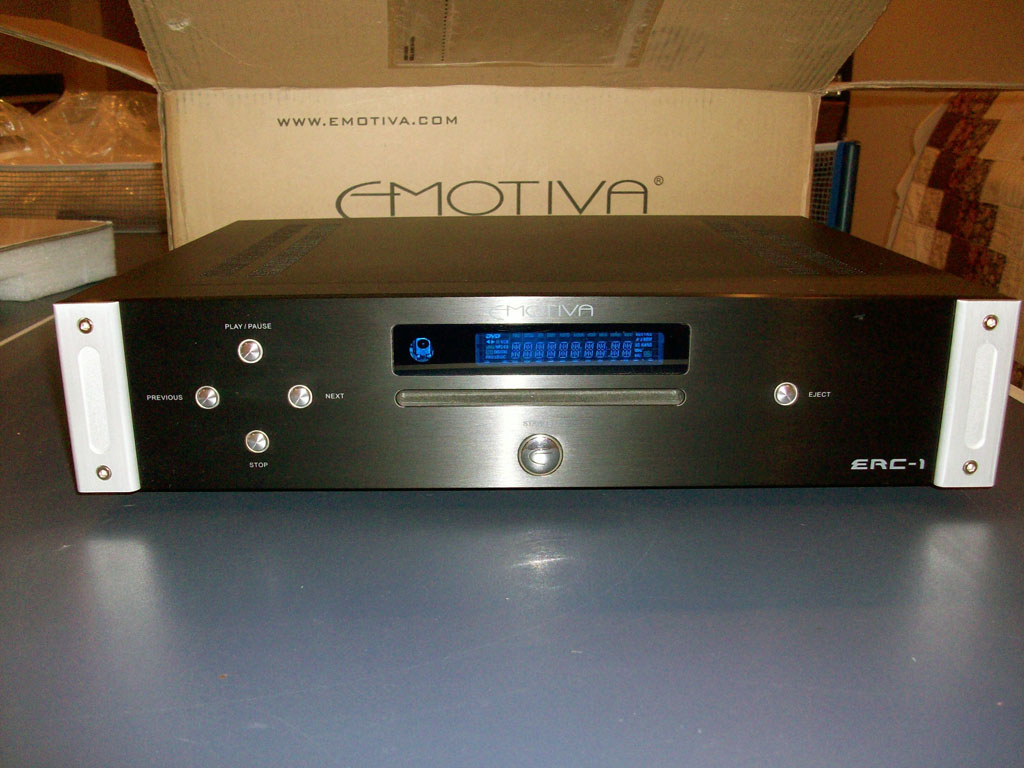 Every audio fan over 35 remembers their first compact disc player. It was a right of passage from old technology of analogue, into that new and obscure world of digital. In my case, it was a second-hand Sony unit. The specific model number has long drifted away, but the excited memory of that first play has stayed with me. To hear music without the clicks and pops was a wonder. Only many years later did I discover the harsh realities that digital music was the end all of sonic reproduction. In the past five years I believe the audio industry has really begun to take a hard look at compact disc players and recognize that much work still needed to be done.

One of new wave of affordable gear manufacturers is Emotiva. Best known for their big power amplifiers sold for reasonable prices, they have become one of the favorite brands of cost conscious audio forum members. Those individuals with difficult to power speakers found themselves smitten with the various amplifier offerings courtesy of this Tennessee company.

For 2009 Emotiva took a big step forward and began branching out into a full range of gear, offering a line of wellreceived speakers along with a preamp, and the review piece, the ERC-1 cdp. Followed Emotiva’s mantra of offering a bucketful of features for the dollar, the ERC-1 comes fully loaded for it’s price of $399, including balanced XLR outs. Up until now a feature left to units well north of $1000 price point. But first one must take a minute to appreciate the 21st century looks, a combination of black, brushed aluminum, cast with iridescent blue lighting. For those that prefer a more subtle look the lighting can be turned down, a definite positive in the WAF category. 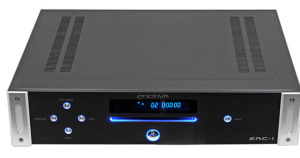 The front panel layout is a combination of futuristic and simplistic styles. Along the left are four buttons in a diamond pattern with the PLAY and STOP placed along the top and bottom, PREVIOUS and NEXT buttons taking the left and right positions. A rectangle display in blue LCD’s gives the pertinent disc information. Instead of a tray just below the display there is just the mouth of a slot-loading disc system lighted in blue. Below the slot is a large, round power button back light in blue as well when powered up, or yellow when shut off. To the right sits a single EJECT button. 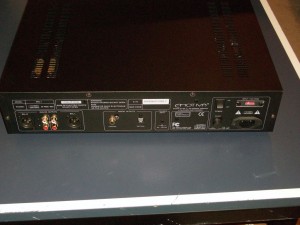 The backside is separated into three sections, analogue output, digital output, and power source. From the left is one XLR followed by not one, but two sets of outputs (a reviewer’s dream when comparing amplifiers) followed by the matching XLR. Two digital outputs are offered, COAXIAL and OPTICAL, a much appreciated and fairly rare option at this price point. The right side includes the traditional IEC power cord receptacle, a fuse access, along with an input voltage switch. The case construction is very sturdy with a tight single sound when given the knuckle tap test.

The remote deserves special praise. Normally at this price point the remote is very basic generic piece of plastic. Not with the ERC-1, this remote is made of solid metal. It begs to be handled and used, but never thrown, as it is weighty enough to do significant damage to wood furniture and living creatures alike. The buttons are well laid out with enough spacing to easily be used without looking.

Inside the ERC-1, anyone with other Emotiva gear would quickly recognize the consistency of the engineering design across product line. The layout is quite substantial, no small circuit board and half dozen chips. The owner gets a case full of resistors, capacitors, and a rather large toroidal transformer. Emotiva points out that three power supplies are used, one for each mechanism of the CD player. analogue and digital audio, and lighting display all have their own dedicated power to reduce noise creeping into the signal. The internal DAC is the Analogue Devices 19955 chip, operating at 24-Bit, with 384 times oversampling. Sampling frequency is the traditional 44.1 rate with the analogue output filter set to 80kHz.

Normally, I just put in a cd, press play and listen to the entire disc. But I was so impressed by the ERC-1 remote, I couldn’t resist searching out tracks on discs and skipping over songs I just wasn’t in the mood to hear. The Big Chill soundtrack has been getting a lot of play in my townhouse ever since my girlfriend brought the movie over to watch in late August. I grew up listening to much of that music playing on my folk’s console stereo. My mom loved listening to Marvin Gaye’s “I Heard It Through The Grapevine” and I remember her swaying to the music as she straightened up the house. In the song there are several violins playing rather high notes. Over the years I usually became a bit irritated by the tinny sound of that portion of the song. The ERC-1 left me relaxed and comfortable. 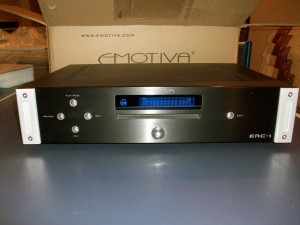 One interesting feature is that the ERC-1 is factory set to start in “Auto Play” mode.** Usually, when available this feature exists via a programming mode on the remote. I liked his feature when listening to a disc in it’s entirety, but when wanting to select tracks it required the extra step of pressing the STOP key.

One test that I like to run on the CD players I’ve bought over the years along with the ones I passed on involves an old Bob Seger Night Moves disc I’ve owned since my original Sony unit. It’s been abused, and scratched worse than a Frisbee on asphalt. My reference Cambridge 540v2 gives up attempting to play the third track after a gallant effort. (No other cdp I looked at when I bought that unit could play any track.) The Emotiva ERC-1 managed to play the entire song with just a few jumps, an impressive feat in my book.

In listening to The Police Synchronicity disc what I try to listen for is the slight accent hints that still come thru in Sting’s vocals. My dvd player completely lacks the capability to offer up this nuance. In comparing back and forth with the Cambridge 540v2, the accent was equally apparent on the ERC-1. The one distinct difference I detected was a slight roll off in the ERC-1 top end during the track “Synchronicity 2”. This may be due to the more extended filtering that Cambridge units are known for. The ERC-1 presentation isn’t worse, just different. Those with brighter speakers may just prefer the ERC-1 slightly mellower output. 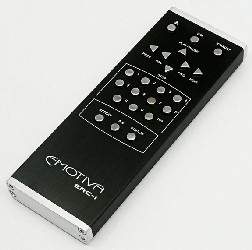 I read a tip on a forum by a well-known dealer that said when listening to cdp’s check the upper midrange frequencies where electric guitars and keyboards live. REM’s “Radio Song” from Out of Time has a section within the track gets pretty harsh on my dvd player, the Emotiva ERC-1 keeps it clear. I point this out because many people have been fooled into getting a cheap dvd player as a replacement for a cdp. I find this a foolish choice for those that can afford the difference. The third track “Low” has a great intro with terrific left and right channel separation, the ERC-1 not only brought out the congas in a wonderfully smooth detail but with detail that made it easy to imagine the instrument in the room.

The Internet-direct model has truly allowed a new generation of audio manufacturers to step forward and bring on a new wave of affordably priced gear. This becomes all the more crucial as the traditional retail model shrinks. The Emotiva ERC-1 like it’s sibling amplifiers offers up a tremendous amount of capabilities for the dollars spent. Its numerous features especially the XLR outputs make it the price/performance leader for under $400. The Emotiva ERC-1 cdp has set its mark in the budget audio world. It’s time for the competition to answer. 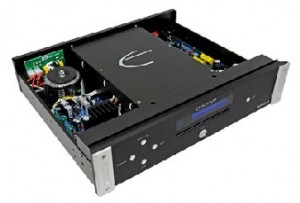