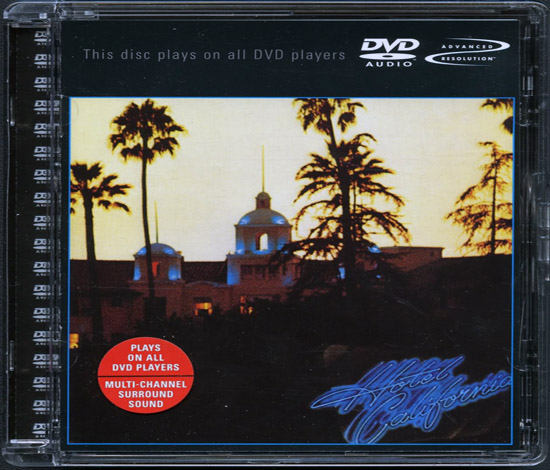 ‘Hotel California’, one of the classic 1970’s albums was released on DVD-Audio just before Christmas, and with it comes another foray into multi-channel music by the Eagles, a group who have been supporting various surround formats for a number of years, most prominently with their concert tour and the release of ‘Hell Freezes Over’.

It’s hard, if not impossible to write anything original or insightful about ‘Hotel California’ as music critics around the world have studied the disc inside and out, upside and down since its original release in 1976. Stumble onto a Bedowin camp in the middle of the Egyptian desert and it’s highly likely that the tribesmen will be able to recite a few lines of the title track, even if “…such as lovely place, such a lovely face…” are the only words of English they know.

The album remains the Eagles’ most successful, winning a Grammy® in 1977 for Record of the Year (the title song) and spawning a brace of number one singles in the US, the second being ‘New Kid In Town’. ‘Life In The Fast Lane’ was another track to receive huge amounts of airplay and is a prime example of how the group acquired an ‘edge’ when Don Felder joined and Joe Walsh replaced Bernie Leadon following an number of highly publicised disagreements with figurehead Glenn Frey. With the personnel changes, the Eagles retained their relaxed country style, but could also boast a rock and roll bite – used as the perfect counterbalance to the melodic undertones that permeate the album.

Strange as it may seem, the biggest hurdle ‘Hotel California’ has to overcome as an album is its own popularity. Why would anyone want to buy a copy when you’ve already heard the songs on the radio over, and over, and over again?

The first reason is the multi-channel remix, undertaken by original producer/engineer Bill Szymczyk together with surround “guru” Elliot Scheiner. The second is the disc’s remarkable fidelity, a result of the restoration work undertaken and an area that is highlighted by Szymczyk in part of the DVD-Video supplementary material. He explains how Scheiner was able to use present-day digital processing tools to create a mix superior to that of the original. Eagle-eyed (groan) Lexicon owners will be quick to spot the company’s M480L and 960L digital effects processors on the desk in The Dog House studios where the multi-channel mix was created.

The title track, with which the album opens, sets the tone for the remainder, both in terms of the surround presentation and the sonic fidelity. The centre is used throughout to convey discrete events (rather than a modest L/R fill as is so often the case) and the surrounds are also used creatively, with guitars being positioned along each side of the room. There are some circling pans and precise – but never distracting – vocal placements. What leaves a lasting impression however, is that in fidelity terms, ‘Hotel California’ has never sounded better, in fact, even if you’ve heard the track ten thousand times before, this presentation is nothing short of a revelation. Low frequencies are deep and forceful – an area lacking on previous CD reissues – but it’s the subtler, delicate sounds such as percussion together with bass guitar intricacies that really benefit from a greater sense of air, presence and immediacy.

Again, it is the understated elements of ‘New Kid in Town’ that are so enhanced by the DVD-Audio presentation, which also imparts a wonderful sense of three dimensional layering hitherto buried under the muddled presentation of both CD and vinyl versions of the disc. The cymbal crashes and drum riffs that close the track provide yet more evidence of heightened dynamics, improved instrument separation and soundstage placement, but if you really want to prove to vinyl die-hards that digital is the future, then skip to the opening of ‘Pretty Maids All in a Row’. This track famously fades up, rather than down, inevitably out of a sea of surface noise even from the finest vinyl pressing, but here the slow fade is out of complete silence – there isn’t even the remotest hint of background noise.

Other tracks stand out due to the weight and forcefulness of their bass-lines, another thing you won’t hear on the radio. Most notable are the thumping accompaniment of ‘Life in the Fast Lane’ (rock can never have enough bass) and the powerful, almost tactile qualities of ‘Wasted Time’ and ‘Victim of Love’.

Unfortunately, the otherwise flawless disc has two problems, one technical and one subjective, although both are minor in the overall scheme of things. From a technical standpoint, ‘Life in the Fast’ lane sounds as though it may just be clipping (or at least it was clipping the DACs in my DVD-Audio player) when things get really loud from around four minutes onwards. Artistically I thought the lead vocals of ‘Victim of Love’ are swamped by the forceful accompaniment, especially during the track’s chorus and that better use of a distinct centre channel would’ve helped, but otherwise Szymczyk and Sheiner are to be commended for their re-mixing efforts.

The alternative DVD-Video soundtrack options are Dolby Digital, presented at 448kb/s and DTS, although for some unknown reason DTS isn’t mentioned anywhere on the disc’s packaging. Both stand up well against the loss-less MLP alternative, except that all those small, delicate elements of tracks such as ‘Hotel California’ are ever-so slightly veiled. Dolby Digital’s bass weight is good, as are the dynamics of forceful pieces such as ‘Victim of Love’, so if you are currently sticking with a DVD-Video system waiting for a DVD-Audio digital interface to materialise, there are still valid reasons for purchasing a copy.

Although the disc does contain a top-notch 192kHz 24-bit two-channel mix, it sounds rather flat and two-dimensional after one has experienced the delights of the 3/2.1 alternative. For purists the presence of a stereo presentation is a welcome addition, and it has not been re-mixed at all, just copied from the original two-channel master tapes. What isn’t clear from the disc itself is just how the 192kHz 24-bit data has been created, since in the ‘Production Notes’ video with Bill Szymczyk, he explains how the original master tapes were sampled at 96kHz. I originally thought some undocumented upsampling may have been employed, but thanks to information from Elliot Scheiner himself, I now know that not to be the case. See our 31st March news story for more information…

Supplementary material is sparse – even the printed booklet only contains the lyrics to the title track – the only item of note is the aforementioned interview with Bill Szymczyk, running just short of six minutes, in which he describes the disc’s concept and the surround re-mixing process, but somewhat ironically, the audio fidelity of this segment is horrendous.

On the whole, and even if you’re overly familiar with the material, the DVD-Audio surround mix of ‘Hotel California’ is an engrossing experience; the multi-channel presentation is sensible and the fidelity excellent. In comparison, the two-channel mix is a little disappointing, but only because it doesn’t have the vibrancy and increased presence of the former, which in its own right is enough to place ‘Hotel California’ on my ‘highly recommended’ list.