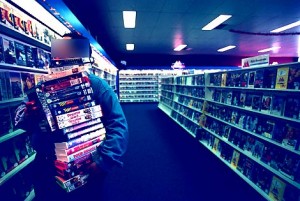 The traditional barometer of movie industry success isn’t the box office–it’s home video sales.  And those were facing a catastrophic meltdown of epic proportions.  So why aren’t movie execs all over whimpering on their floors in a fetal position?  One very simple reason–rentals seem to have taken over.

The horrendous economy has driven what appears to be a new dynamic: people aren’t buying DVDs any more, but rather, they’re renting them.  And they’re renting in vastly larger numbers than before.

Frankly, this makes a note of sense.  Based on how much easier it is these days to have a movie when you want it, and pretty much what you want (they’re working on that part frantically), why bother buying?  If you can stream that copy in, or call it in on a day’s notice from Netflix or Blockbuster Online, or even just make a quick hop to the local video store (some people still do that, you know!), why bother shelling out thirty bucks for a copy?

Part of it likely is the recession at work.  But once the recession ends–some say it already has–I don’t look for this to change.