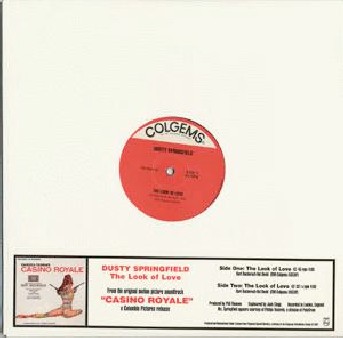 Dusty Springfield’s voice is intoxicating: Smooth, sultry and sexy. On the audiophile old chestnut, Casino Royale Soundtrack, “The Look of Love” is a standout track for me. In fact, it’s thestandout track on the album in my view. This view is shared with others: The Bachrach/David song was nominated for an academy award for best song in 1967. I don’t know when I first heard “The Look of Love”, but I do know that I can’t remembernot recognizing the tune. In fact, I’m listening to the track as I write this (though sadly on my iPod, not my turntable, since I’m many feet under the English Channel in a Eurostar train).

Some time ago I bought the Classic Records 33rpm reissue of the Casino Royale soundtrack and put it aside for “later”. More recently I received from Classic this unusual 12” single, consisting of “The Look of Love” at 33rpm on one side and 45rpm on the other. A rather unusual release, yes, but this tune is one that in my opinion justifies such an “excessive” format.

The album is pressed on Classic’s unusual “clarity” vinyl. My feelings are a bit mixed on this format: The translucent vinyl sure is good at hiding dust. On the other hand, it looks exceedingly cool on the turntable. But how does it sound?

First things first: The “standard” Classic black vinyl pressing at 33rpm has been my “reference” copy of this cut for some time. Visiting a friend in Hong Kong earlier this year, I had the opportunity to compare the Classic Records reissue with a first pressing of the Casino Royale soundtrack. The system included Rockport Aquila speakers, a Clearaudio Statement turntable and VTL tube monoblock amps. There was no denying that the two pressings sounded different, though I’m not convinced that one or the other was the “killer” version.

Likewise, I didn’t notice much of a difference between the 33rpm cut on the full album and the 33rpm side of the single. There was perhaps a touch less groove noise on the Clarity vinyl, but the sound quality was similar.

The difference appeared when the song was played at 45rpm. At speed, there is more air, more breathiness in the singer’s voice. The instrumentation gained a greater sense of three-dimensionality. In sum, the overall sonic presentation of the song was ratcheted up a notch. Yes, it sounded better. I’ve found this to be the case in most 45rpm pressings that I’ve heard, whether jazz reissues by Music Matters and Analogue Productions, classical or even rock and pop. The need to cram less information into the groove allows the stylus to more accurately reproduce what’s in the groove. It makes a difference, the downside being frequent trips to the turntable.

In the case of this single, of course, practicality was not a consideration: This is an issue for, to some degree, those audiophiles insane enough to want to compare, and possessing equipment (particularly the turntable/arm/cartridge combination) of sufficient quality to highlight the difference. If you fall into this category, and like the tune, then this is a collector’s item to own.

I won’t be pitching my copy of the Casino Royale soundtrack in favor of this two-sided single, but I’ve thoroughly enjoyed the workout that it gave my ears and my equipment.