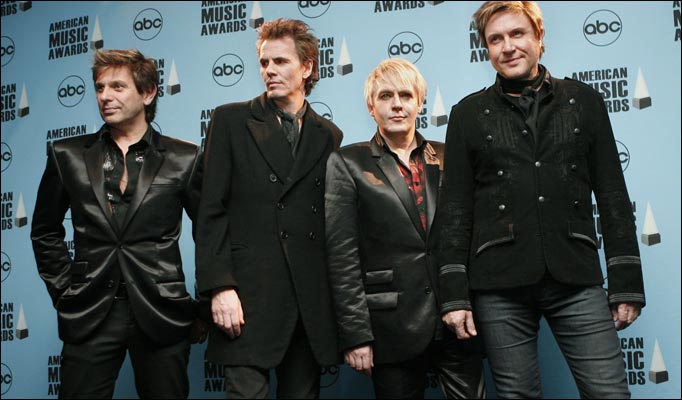 Columbia Records and Epic Records released albums by Duran Duran, John Legend, John Mayer and Switchfoot in 5.1 Surround Sound Super Audio CD earlier today. The new SACDs were all previously available from the Sony/BMG labels in the “Dual Disc” format which featured CD Stereo editions of the music on one side and a Dolby Digital edition of each album’s 5.1 Surround Sound mix on the other.

With today’s release, music fans will now get to hear the Stereo and 5.1 Surround Sound mixes of the discs in high resolution audio. A second group of 5.1 Surround Sound Super Audio CDs from the Sony Classical label are slated to arrive in stores just after the new year on January 3rd.

A Transition to the Sony BMG Family
While the 4 new Surround Sound SACDs feature the familiar CD Jewel Box and “Plays on CD & Super Audio CD Players” sticker that have adorned past Sony Music SACD releases, the new releases carry the BMG/RCA UPC number on their spine rather than the more familiar “CH” and “EH” number we usually see on Columbia and Epic labeled Super Audio CD releases. I did note that each of the SACDs released today did carry a “CH” and “EH” catalog number on the label on the top of the album jacket, but this number was a 6 digit number dervied from the BMG/Sony numbering system rather than the familiar 5 digit Sony Music system. Clearly the transition to the merged Sony/BMG Music operation is nearing completion.

Astronaut is the group’s first album in more than two decades with the original band members performing – Simon LeBon, Nick Rhodes, John Taylor, Andy Taylor and Roger Taylor. The disc features the rock group performing 12 songs in a style that LeBon told Rolling Stone Magazine reminded him of “The Mamas and the Papas meet Kraftwerk.” Former Chic producer Nile Rodgers is part of the album production team and his dance music influence is felt throughout the disc.

Astronaut features a very aggressive 5.1 Surround Sound mix. On Track 1 (Reach Up for the Sunrise), effects are panned around the room while vocals are kept up front. Track 4 (Astronaut) uses the Surround Sound capabilities of SACD to emphasize the bass line of the song while reinforcing it with effects that pull you in to the music. Fans of rock Surround Sound albums will enjoy this new SACD.

The album’s 5.1 SACD Surround Sound Mix was done by Jeremy Wright for 365 Artists with additional engineering by Paul Wright. The SACD Mastering of the album was done by Vlado Meller at Sony Music Studios in New York City.

Get Lifted is the first studio album by R&B singer John Legend. The album features 14 tracks, all written by the singer under his real name John Stephens. The album also features several guest artists including Lauryn Hill, Kanye West (who serves as the Executive Producer of the album), Snoop Dogg, Miri Ben-Ari and the Stephens Family.

The album’s 5.1 SACD Surround Sound Mix was done by Jim Caruana assisted by Mark Rinald and Bram Tobey. The SACD was mastered by Vlado Meller and authored by Woody Pornpitaksuk at Sony Music Studios in New York City.

Room for Squares was originally released in 2001 and is John Mayer’s second album for Sony Music. It features two hit singles by Mayer – “No Such Thing” and “Your Body Is A Wonderland”. Room for Squares predates his 2003 album entitled Heavier Things that was previously released as a 5.1 Surround Sound Super Audio CD (Aware/Columbia Records CH 90746) and later in CD Audio and 5.1 Dolby Digital as a Dual Disc.

The album’s 5.1 SACD Surround Sound Mix was done by Jack Joseph Puig at Oceanway Studios. The SACD was mastered by Vlado Meller and authored by Woody Pornpitaksuk at Sony Music Studios in New York City.

The Beautiful Letdown was originally released in 2003 and is the group’s debut album on Sony Music’s Columbia Records label. The album features 11 songs that were designed to broaden the group’s following beyond their Contemporary Christian Music beginnings into a more Adult Contemporary vein. The Beautiful Letdown features the songs “Meant to Live”, “Dare You to Move” and “This Is Your Life”.

The album’s 5.1 SACD Surround Sound Mix was produced by the husband and wife team of Elliot Mazer and Diana Haig. The SACD was authored by Woody Pornpitaksuk at Sony Music Studios in New York City.

Availability
The 4 new Surround Sound Super Audio CDs by Duran Duran, John Legend, John Mayer and SWitchfoot are now available at music stores including Tower Records. As usual, the new SACDs are filed in the regular CD disc bins at Tower Records. The discs can also be ordered from several web sites that carry SACDs including Elusive Disc, CD Universe and Amazon.Com.

3 More Sony Music Surround Sound SACDs in January
In a couple of weeks, just after the New Year arrives, Sony Music’s Sony Classical label will be releasing 3 more Surround Sound SACDs. This set of Super Audio CDs will feature an album by celloist Yo-Yo Ma as well as the movie soundtracks to The Legend of Zorro and The Phantom of the Opera.