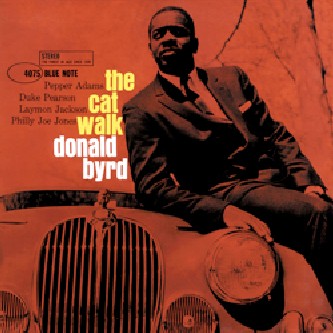 A Detroit native, trumpeter Donaldson Toussaint l’Ouverture Byrd II was exposed to some giants of jazz at a tender age, playing with Lionel Hampton while in high school and joining Art Blakey’s Jazz Messengers while in New York pursuing his masters degree. Education seems to have been a constant in Byrd’s life: Not only does he have a BA and an MA, but he has taught music at a number of universities. Byrd’s “style” has evolved over the years from the hard-bop of the fifties and sixties to jazz fusion and R&B in the seventies and beyond. Unlike many of the artists in this series of Blue Note releases, Byrd is still alive…a testament to good genes and/or a healthy attitude toward substance abuse.

On The Cat Walk, Byrd’s 1962 album, his quintet is composed of Duke Pearson on piano, Laymon Jackson on bass and Philly Joe Jones on drums, with baritone saxophonist Pepper Adams joining Byrd on the front line. The seven songs on the LP are originals, penned in the main by Byrd and Pearson. There are no “standards” on this album…it isn’t that I don’t like standards (I do), but it’s refreshing to hear a full album of “new” work.

Side one is filled by the sultry, sinuous sound of Byrd’s muted trumpet trading the stage with Adams’s sax on the tune “Say You’re Mine”. The trumpet is hard right in the mix, the sax generally on the left, and it works: Byrd’s haunting trumpet interplays gorgeously with the sultry saxophone of Adams. The rhythm section is top-rate, but what really pulls together this track is the piano of Duke Pearson. There are moments in this tune when the spirit of Vince Guaraldi is conjured forth. A superb way to start the record, “Say You’re Mine” is a standout, but it’s subtle: It doesn’t grab a listener by the throat as does, for example, “A Night in Tunisia” on the Blakey LP of that name.

The band swings a bit more on “Duke’s Mixture” as Byrd unmutes his instrument, and the upbeat mood continues with “Each Time I Think of You”. (Is it me, or do the first few bars of this piece sound like the title tune to a sixties game show?).

Side three leads off with the title track, a Byrd composition which has been described as having (and indeed was written to convey) a sinuous, feline feel. “Cute”, the most hard-boppish, up-tempo track on the album, features a great drum solo by Philly Joe Jones: At higher volumes it will nearly blow you out of your chair.

The album is rounded out by its longest track, “Hello Bright Sunflower”, which is a sort of fantasy around the first few bars of the classic “Lullaby of Broadway”, and which features Byrd with his mute on again.

And the sound…ah yes, the sound. Absolutely, positively superb. If all vinyl had sounded like this 30 years ago we’d have never invented CDs. The solo instruments emerge from the rhythm as if they were in the room with you. It’s easy enough for the rhythm section on recordings to fade into the background as a morass of sound. Here, the listener can so easily distinguish the separate elements: Each string of the bass, each drum, each cymbal. Such tightness in the low frequencies. Such air and sizzle in the cymbals. Paradise.

This is testament, of course, to both the recording and the mastering. Hoffman and Gray have done a fantastic job on this LP, working from some exceptionally strong material. As with the other titles in this stream of Blue Note reissues, sonic quality is extremely high. The Music Matters team knows what they’re doing, and they do it very well.

My review copy, as noted above, is a test pressing, and thus is not necessarily representative of the upcoming production run (this title is anticipated to ship in February 2009). Previous experience indicates that the production LPs will be, like this test pressing, flat, shiny and flawless. I own every one of the Music Matters Blue Note reissues, and each one is relentlessly consistent in its high production quality.

Likewise, I’ll make no specific comment on the jacket, because I’ve just got a white one, but if The Cat Walk features the same level of attention to detail and quality as the other titles in the series, then there will be no disappointment. The newer gatefold jackets are incredibly thick and shiny. The test pressing innersleeves are the older plastic-lined paper style; in the production run I assume that these will be replaced by the all-plastic pink innersleeves (which, interestingly, I now see other labels including in their packaging).

To sum up, Music Matters has again hit one out of the ballpark. The Cat Walk pleases from beginning to end. It’s got great music, great sound, great production and great packaging. How much better than that can it get?