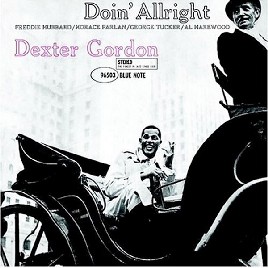 The big man (he was six feet, six inches tall) Dexter Gordon is one of jazz’s great tenor saxophonists. Doin’ Allright, his first Blue Note album, was recorded in May 1961 by Rudy van Gelder, and these sessions also resulted in the seminal album Dexter Calling. Doin’ Allright is another in the series of 45rpm Blue Note reissues by the team at Music Matters.

Gordon was on the comeback trail in 1961. Though he had been recording since the forties, his imprisonments on narcotics convictions had led to his being nearly forgotten by the late fifties. This “revival” on the Blue Note label was to be followed by a long sojourn in Europe (Copenhagen and Paris, mainly), which he found more to his liking than the US. His return to the US in 1976 was greeted with a warm reception.

Doin’ Allright is a marvelous piece of work. Joined by a team of top rate musicians (Freddie Hubbard on trumpet, Horace Parlan on piano, George Tucker on bass and Al Harewood on drums…the latter three comprising the Horace Parlan Trio), Gordon drew a line in the sand with this comeback album.

Much has been written about he tunes on this album; I would simply add that this is perhaps one of the more accessible Blue Note albums (at least it was for me), and the Gershwins’ “I Was Doing All Right”, the first track, sets the tone in a big way. The expression “Smooth Jazz” has become an epithet today (pace, Kenny G.), but if you really want to understand the difference between Smooth Jazz and jazz played smoothly by masters, pick up a copy of this album.

While you’re at it, if you are fortunate enough own a turntable (or peculiar enough, like me, to own nine of them) the version that you should buy is this one. There is an almost spooky presence throughout all four sides of this double LP…Rudy van Gelder was very good at extracting a “you are there” feel from the musicians (and the tape), and the Music Matters team has richly captured that feeling on vinyl. The mastering (Hoffman and Gray, as with all the Music Matters and Analogue Productions Blue Note 45rpm reissues) is superb. As with other albums in the series, what really sets this album apart for me is thereality of the rhythm section. Aside from a live performance, it is hard to believe that anything else could sound better.

Production qualities are superb. The test pressings to which I listened were flat, shiny and noise free. Test pressing packaging is not indicative of final packaging, of course, but the gatefold album covers in this series have been of superb quality, both in terms of graphics and physical presence. There is no reason to expect that this reissue will be any different.

I’ve listened to every Music Matters Blue Note reissue since they began to be released in early 2008. I have yet to hear anything but the best sound, with production quality to match. Whether you are a Blue Note aficionado or a jazz neophyte, this release of Doin’ Allright is an LP to own.