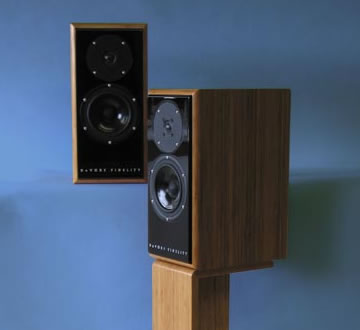 Sophisticated enough for even the most jaded audiophile who has heard it all, yet a great experience for those looking to grow-up and smell the music.

So Where Does that Leave the DeVore Gibbon 3s?

John Devore’s smallest member of the DeVore line-up, the Gibbon 3, is positively killer. It requires more juice than the Gibbon Super 8s or Silverback Reference, but with the right amplifier, and not necessarily a very expensive one, it is one of the best 2-way monitors I have ever listened to and easy to work with if you can’t get away with stands in the middle of your room.

At 12.5”H x 6.5”W x 9.5”D, the Gibbon 3s are not exactly hug, but they just sound that way. They are manufactured and assembled in DeVore’s Brooklyn-based factory and are available in a number of beautiful hardwood veneers. The light cherry finish on the reviewed pair has a beautiful combination of lightly wavy straight grain throughout.

The fit and finish on these is what one should expect for $1,700.00. The entire package, including the Cardas binding posts, custom 5″ driver and 1" tweeter, both of which are manufactured for DeVore Fidelity in Europe, reeks of quality. The mini-monitor is a rear-ported design that can be used very close to the wall behind it and not suffer from indigestion in the lower registers.

Setting up the Gibbon 3s was a lot of fun because its size allowed me to try it in more than one room, and even inside a wall unit which is where it might end up for some listeners. Speakers have come and gone over the years, but speaker stands filled with sand never seem to get the hint. Being 6′ 3” tall, I require taller stands for stand-mounted speakers, so I tried the Gibbon 3s on 24” and 28” stands (both were of the 4-post sand-filled variety with those nasty spikes that pierce flesh), ultimately preferring the 24” height for its tighter bass response and image height.

My living room is 20′ x 13′ x 8′, with my listening chair 4′ from the wall behind it. A 108” wide built-in maple/cherry wall unit takes up most of the right side of the room. Additional seating, a fireplace, with its opening covered during reviews and my equipment rack occupy the left side of the room. An 8′ x 10′ wool rug partially covers the hardwood floor. The room is on the lively side, but the wall unit, seating, and carpet do a decent job of taming it. All windows are covered with absorbent horizontal blinds.

The first position I tried was on the 24" stands with the rear of the speakers 36" from the wall behind them. The outside edges of the speakers were 20" from the sidewalls. I started with the speakers pointed straight ahead, which is generally how I’ve always positioned speakers in my room. After giving them about 30 hours of abuse (AC/DC), I found the results encouraging, but felt that the sound could be more open if I pulled them out even farther.

At 45", I hit the target. The distance from the sidewalls was not enough and I ended up pushing them closer together so that they were 32" from the edge to the walls. Everything seemed to gel and I left them there (making them an easy target for my daughter) for the duration of the review.

DeVore Fidelity’s literature claims that the Gibbon 3’s frequency response is 45Hz to 30kHz (+/-db?) and while we have no technical measurements to refute or validate that claim, our ears suggest that with specific amplifiers, the Gibbon 3 is certainly capable of reproducing very deep and taut bass response; certainly a lot more than its size suggests.

At 86dB with 8 Ohms impedance, the Gibbon 3s are not friendly to a Single Ended Triode (SET) load, unless one were thinking of using something like an Art Audio Carissa with its 845s. My Fi X amplifier loaded with Sophia 2A3s barely made a dent. No shirt, no shoes, no dice. The Fi offered only a mere glimpse of the Gibbon 3’s un-boxy sounding midrange and extended top end.

Next up were the Leben CS-300x integrated amplifier and Shindo Labs Montille power amplifier; both push-pull EL84 designs offering 12 juicy watts. The Montille has g ain pots which can be raised/lowered depending on your choice of preamplifier (Shindo Labs Aurieges L and Fi Y) and I generally left them at the midnight hour. I occasionally tried them at 1 or 2, but 90 per cent of my listening was done at 12 O’clock.
Brownie McGhee and Sonny Terry’s rendition of “Everyday I Have the Blues” may have been foreshadowing some mischief yet to come, but boy did it sound sweet and expansive while it lasted. The Leben CS-300x is a really underrated product. How this company avoided the radar of North American audiophiles for so long is slightly baffling.

The Gibbon 3s are a very open and immediate-sounding loudspeaker that excels in the midrange and treble; wonderfully open, tonally rich, and blessed with top end extension that is airy and never etched or shrill. While quite resolute in the bass, the Leben just didn’t have the power or grip to really drive these speakers to levels that hard-rocking folk might demand. Those who enjoy jazz, blues, chamber, folk or choral at sane listening levels will probably deem me a sadist for complaining, but Green Day, Zeppelin, Floyd, and Flea were merely “good” when I pushed the CS-300x/Gibbon 3s.

Mozart and Dolphy were outstanding. Elvis was in the building, flirting with my wife. Don’t think I didn’t see that, you 400-pound sequin-wearing bacon-downing hillbilly!

Eric Dolphy was a genius, and that genius made “G.W.” look almost smart through the Gibbon 3s. His alto sax and bass clarinet had bite without chewing one’s head off.

The Gibbon 3s and CS-300x are a winning combination as long as you don’t live on a diet of Pavement, Green Day, and Metallica at levels for which even Lars would threaten to kick your ass. Strive for that emotional connection without going deaf.

The Shindo Labs Aurieges/Montille have wonderful resolution from top to bottom, and a slightly warm tonal balance, which also really complimented the immediate and open presentation of the Gibbon 3s. Unlike the Leben CS-300x, which ran out of gas at very loud levels, the Montille seemed to take these more in stride and rolled off more gracefully.

Both Hank Mobley’s “Bouncing with Bud” and Lightnin’ Hopkins’ “Take it Easy” offer unique challenges and the Gibbon 3s barely broke a sweat. I enjoyed both tracks at low and high listening levels, thanks to the extraordinary detail retrieval and clarity. The speakers do not gloss over bad recordings, a fact that will most likely annoy fans of over-produced formulaic schlock pop. Great sounding stuff such as Departure from The Mammals, Winterpills’ self-titled release, and Ruth Gerson’s Wake to Echo will keep you more than engaged for hours.

My NAD T753 and T763 surround receivers also worked rather well with the Gibbon 3s, supporting them with a lot more power, but the combination that I really enjoyed was the Gibbon 3s with the Arcam Solo that I borrowed for a week. The Solo (“Why you stuck up, scruffy lookin…”) is a 75-watt integrated amplifier/CD player/AM/FM tuner unit from Arcam that really blows the doors off with a speaker such as the Gibbon 3s. It doesn’t quite have the detail retrieval or coherence of the Leben/Shindo Labs equipment, but for almost ½ the price of the Leben and ¼ the price of the Shindo combination; it is ridiculously good.

Ry Cooder’s Chávez Ravine was my sleeper album of 2005, and its unique, dirty, gritty flavor oozed out of the Gibbon 3s like the bean and cheese from a good Burrito. It burns your skin and stains like a mother on that new shirt you’re wearing, but man is it good. The Solo had surprisingly fat cojones for a Brit piece of kit. The Gibbon 3s are from friggin′ Brooklyn. ′Nuff said.

KT Tunstall’s “Black Horse and the Cherry Tree” from Eyes to the Telescope has a snappy beat to it and the Gibbon 3/Solo combination went along for the ride. Good album, gritty singer, great song to get drunk and start dancing to.

My only real complaint about the Gibbon 3s involves their sensitivity; they are not the easiest speakers to drive and that’s a shame because I have no doubt that they would sound great with gear such as the Fi Super X or Almarro A205A MK II, which are more affordable than the Leben CS-300x and the Shindo Labs gear.

Considering their performance with the Arcam Solo, I can confidently recommend the Linn Classik, Sugden A21a, Exposure 2010s, the Euphya Alliance; all solid-state integrated amplifiers with some drive, but not too dry.

Their superb coherence, punchy and immediate midrange, detailed and airy treble, superb imaging, and surprisingly deep bass response add up to a complete package that is domestically friendly and ready to kick ass for the long haul.

Sophisticated enough for even the most jaded audiophile who has heard it all, and the “Hello, this is what you’ve been missing listening to [email protected]# via your iPod” experience for those looking to grow-up and smell the music.