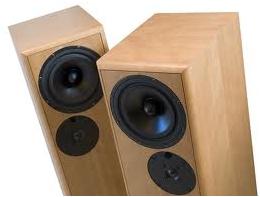 They may be a bit expensive, but these speakers are well worth the investment. Devore Fidelity’s SUPER 8s have great sound and design.

The DeVore Fidelity Gibbon SUPER 8 loud speakers come from Brooklyn, not Beijing, but still manage to knock a grand off the high-end club’s admission price .

Conventional, end-of-last-century audio wisdom held that the price point one must meet to enter the upper echelons of loudspeaker performance was at least $5000. But in today’s world, with everything from Cuisinarts to cannolis, prices have dropped while in many regards, quality has risen. You can get rocking good mini-monitors from Tannoy, Triangle and the like for low dollars simply because designs originated in the UK with manufactures offshore. China has certainly revved up their hi-fi engine commensurate with their plan of global economic domination – a simple web search yields dozens of Chinese tube amps and digital companies intent on invading the US high end market (though it seems that the world’s most inveterate audio geeks reside in the Pacific Rim).

Into this new paradigm of melting dollars and increasing foreign competition comes Brooklyn’s own DeVore Fidelity and their owner and designer/guru, John DeVore. A graduate of the Rhode Island School of Design and a dedicated indie rock drummer and all around tall guy, DeVore is one of the most low-key audio designers on the planet. Apparently, when you know your products excel, you can simply sit back and let the goods do the talking as it were.

I have reviewed or had in house for long periods of time several of DeVore’s speakers, from the not so diminutive 7.1 monitor and his first floor stander, the Gibbon 8, to today’s review submission, the SUPER 8. Using technology found in his top of the line $15,000 Silverback Reference, DeVore’s $4,000 Super 8 challenges the 5K price point, and then some. As a former owner of the classic Proac 2.5s, as well as similarly priced speakers from Audio Physic, Silverline, and JM Labs, let me state upfront that the DeVores surpass those designs in terms of clarity, definition, imaging and tonal balance. In fact, tonal balance is perhaps the SUPER 8’s greatest strength. As a drummer who grew up listening to his mother practicing her concert repertoire, often lying under the piano as she flew through Bach and Chopin, DeVore inherently understood how a musical instrument should sound. Perhaps this early music immersion is the origin of DeVore’s mastery of the details that result in superior sound reproduction.

SUPER 8s may not have the greatest bass extension I have ever heard, nor are they as easily warm and generous as the Proac 2.5s or as exhilarating as the JM Labs, but what they do is provide a natural window into the music that registers as totally right. Even if you can’t put your finger on it right away, the SUPER 8s soon hit you in the gut with their sense of natural tonality. Now that I have spilled the beans, let me backtrack.

The DeVore Fidelity SUPER 8s have a frequency response of 36Hz – 40kHz, sensitivity is 90dB/W/M, impedance is 8 ohms, and their dimensions are exactly the same as the Gibbon 8s: 34”H x 8.125”W x 12”D. But then again, cosmetic details don’t tell the whole story. For that we must speak with the man himself.

“The main goal with the SUPER 8,” explained John DeVore from his Brooklyn Navy Yard facility, “was to make something that behaved as much like the Silverback as possible, but in a package the size and place-ability of the standard Gibbon 8. That was the design format; it wasn’t about hitting a price point or anything like that. Then we looked at getting the cabinets right and getting the sound right and using the right drivers. That is what dictated the price.”

The SUPER 8s look almost exactly like the Gibbon 8s (except for a rear firing port and much larger adjustable footers), but its technology is more closely based on that of its big brother, the Silverback Reference, which has already been very well reviewed in several publications.

“The SUPER 8 has the Silverback tweeter,” DeVore says, “and the woofer in the SUPER 8 is very similar to the midrange in the Silverback , and the cabinet structure is more like the Silverback than the Gibbon 8. Just the way we use bracing, the way we are actually building the cabinets themselves is similar to the Silverback . If you look at the way the SUPER 8 is put together versus a Gibbon 8, the construction technique, and also the multi-chamber tuning are more like the Silverback. The rear port is from the Silverback. I designed the drivers, they are built to my specs by a European company. The woofer is polypropelene; poly is inherently well damped, and it gives you good bass response for the size.”
Again, for my money, the SUPER 8’s strongest suit is their pure, close-to-the-original-recording sense of tonality. Be it a drum, an oboe, a human voice or a duck call, these speakers relay the natural tonality and essence that makes music sound alive and real.

“My approach to design is always very big picture,” DeVore adds. “The idea is to make a complete package. There is no one thing that they do better than other things. It is important to me. If it looks as if suddenly I have a design that images beautifully but other things are not going well, then I need to address those other things. The whole idea is to have the most balanced possible design. That goes for all my speakers. I want the speakers and whatever colorations or anomalies there are to be out of the equation as much as possible. Those drivers are designed with my cabinet and crossover in mind. Everything is designed together so everything is complimenting everything else. It is not as if I am cramming a driver that is better for the Silverback into a tiny little box and then having to compensate for that. It all works in concert.”
My introduction to DeVore Fidelity came first as an occasional visitor to New York’s In Living Stereo where the entire line is stocked and ready for audition. I was taken with the humble looking Gibbon 8’s relaxed manner, warmth and overall musicality. Soon, I was reviewing the 7.1s for 6moons.com. A speaker very different from the Gibbon 8s, the 7.1s were designed for home theater but to my ears possess all the qualities of a perfect studio monitor. They are very neutral and image like nobody’s business. They are slightly more alive and extroverted than the more laid back Gibbon 8s, and image as you would suspect a high quality monitor would. The 7.1s have a flatter overall sound than the Gibbon 8s as well. Not that the Gibbons are colored, but they are an easy to enjoy speaker that matches well with most any amp. I half expected the SUPER 8s to fall somewhere between the 7.1s and Gibbon 8s, don’t ask me why. And though DeVore may design all his speakers to share similar qualities of balance and listenability, the SUPER 8s sound nothing like DeVore’s earlier designs.

One thing that you notice automatically are the speaker’s offset tweeters.

“The Gibbon SUPER 8 tweeters are offset for a couple of reasons,” DeVore explains. “It was an elegant way to achieve a time-alignment without increasing the speaker height, while at the same time decreasing the effect of edge diffraction by making the distance from the tweeter dome to the left and right cabinet edges different. The SUPER 8 woofer is designed to load the cabinet from the end (the top of the cabinet) so the tweeter had to be either below or perched on top. Top-mounting the tweeter, as well as adjusting driver alignment with a stepped-back front baffle would’ve introduced complicated reflection surfaces near the tweeter, introducing some comb-effect interference in the high frequencies.”

Of equal importance, DeVore recommends that the SUPER 8s should be titled back ever so slightly, aiming up and at ‘em.

“The rake-angle, or tilt-back of the speakers,” he continues, “in combination with the driver positioning mentioned above, brings the whole wave-front into alignment. Again, without increasing the height of the speaker cabinet. The cabinet itself is made from 3 different materials, chosen for their resonance properties, based on the individual panel sizes.”

As DeVore suggests toeing in the speakers to fire directly at the listener, I experimented. Set-up was a breeze: in my small room, speakers really work in only one spot. The speakers sounded good out of the box, a little bright perhaps before break-in, but super clean, super detailed, with solid, punchy bass response and a clear but un-fatiguing top end.

After playing the speakers for a couple of months I knew that here was a speaker entirely unlike the Gibbon 8. After the re laxed, warmish and slightly looser presentation of the Gibbon 8s, the SUPER 8s were a wake-up call to say the least. Greatly improved definition, tighter bass, and a silky yet extremely defined top end were again, its strong suits. Soundstaging was deep and wide, and bass was very punchy. Pungent and crispy. The speakers lacked the Senssuround qualities of the much raved over Gallo Reference 3s, but definition was superior, as was a sense of defining every recording’s unique recording space. The SUPER 8s got to the heart of the music, with no added editorializing or coloration. Again they were like DeVore’s 7.1s in that regard, but with sweeter tonality and added bass oomph. The sweet spot was small, unlike the Ref 3’s amphitheater like presentation, but again, the SUPER 8s trumped that speaker for spot-on tonality, clarity and imaging precision (no bass amp needed).

Every recording was full of life and pizzazz through the SUPER 8s, and again, the sound was punchy, crisp, pungent, and with great detail and definition. Perhaps with the wrong electronics, the speaker could get out of control in the treble, but even in my tin ceiling-ed room the sound was mostly silky smooth. A friend owns the SUPER 8s and in his much larger room with cathedral ceilings, the speakers do not fill up the room as have some other speakers he has owned. But in my smaller room, it was easy to drive the SUPER 8s to maximum pleasure.

Is the Gibbon SUPER 8 the perfect speaker? No. At extremely loud sound pressure levels the presentation became a little cluttered. Its sweet spot is small and you may have to futz around with setup to get them to really lock in. But for all the points I have already mentioned, the Gibbon SUPER 8 is a giant killer. Don’t expect to be lulled asleep in a bath of tubish glow (even if you use tubes) or for these speakers to make bad recordings sound good. Garbage in, garbage out is the operative premise here. But if getting closer to the music is your goal, the Gibbon SUPER 8s should be on your audition list.